Solar Energy Stocks Grow as Many Divest in Fossil Fuels 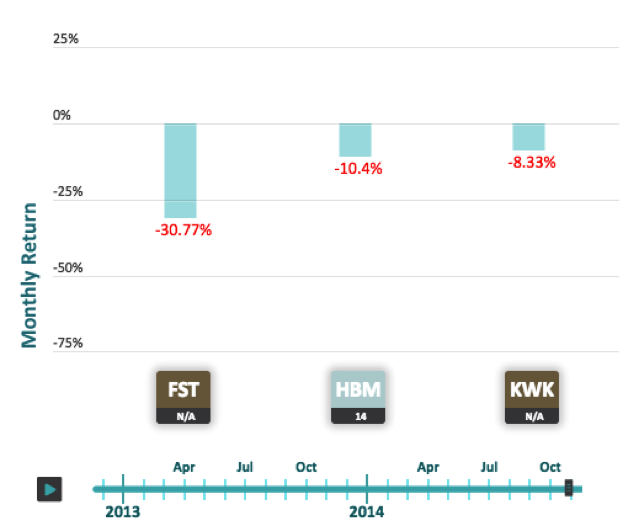 Solar energy is becoming more prominent on the market, competing with its carbon-dioxide emitting cousin (a.k.a.– fossil-fueled energy).

The typical image of a Wall Street investor, armed with a cigar and a portfolio of hazardous stocks, may finally be fading in the distance…

The idea of harvesting fossil fuels for energy, dating back to 1556, was first hypothesized by a scientist named Georgius Agricola. It is unlikely that Agricola knew at the time how his discovery would change the world.

In terms of stock returns, fossil fuel stocks have always been a big part of the mix (Exxon and Chevron are 4% of the S&P 500 Index). Throw in a promising return, factor in the shale boom, and stocks like Forest Oil Corporation (ticker FST) and HudBay Minerals, Inc. (ticker HBM) have been flying off the shelves.

Until recently that is. After thirteen prestigious universities, such as Stanford University and Hampshire College, declared they would be divesting from fossil-fueled energy, monthly returns of top leading companies have been dropping significantly.

With solar stocks being continuously shorted by pro-fossil fuel bears, solar bulls may be the ones cashing in at the end. Research conducted by Deutsche Bank AG predicts that solar power will be just as (if not more) economical than fossil-fueled energy in 47 U.S. states by the year 2016. The estimated 30% tax credit used for the report expires that year, but reducing it to a mere 10% still yields competitive results across 36 states.

Today the costs of solar versus traditional electricity have already reached grid parity across 10 U.S. states, with a predicted 30% year-over-year expansion of residential and commercial markets in 2015. According to the International Energy Agency, solar energy will be the primary source of electricity by the year 2050.

On top of conserving the environment, solar energy is appealing for several other reasons. It’s based on an evolving technology, as opposed to a limited resource, and recent research with nanoparticle materials shows that photovoltaic cells can reach efficiencies up to 90%. Furthermore, funding for solar panel installation is widely available to the public through companies like SolarCity Corp.

So what next? Based on the MAC Global Solar Energy Index, Guggenheim Solar (TAN), a $344 million dollar exchanged-traded fund, looks promising with 70% of its assets in stocks of American and Chinese companies. Its 129% gain last year certainly merited attention, despite its heavy losses this year. With an increasing grid parity across the nation and factoring in the predictions of the International Energy Agency, the ETF could be safe bet for years to come.

With a reduction of carbon dioxide gases trapping sunlight in the atmosphere, the glare of solar energy should only become brighter. Regardless of their motivation, it looks like traditional Wall Street investors may be forced to smoke their last cigar and adopt a healthier approach to investing.