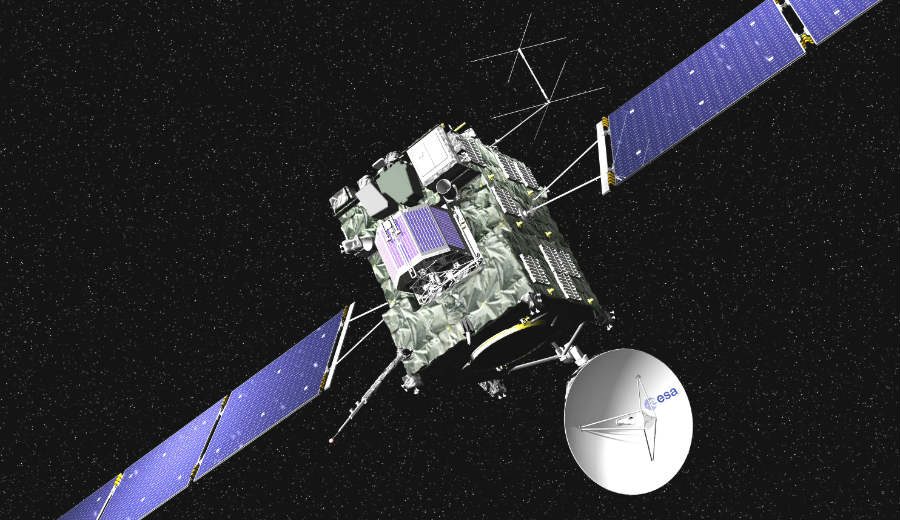 The mission was to land on Comet 67P/Churyumov-Gerasimenko, currently somewhere in the outskirts of Jupiter, and gather priceless information on the evolution of the Solar System with the analysis of complex organic molecules that could shed light on the origin of life on Earth after the Big Bang. The probe had to travel a cumulative distance of over 6.4 billion kilometers in 10 years, using gravity forces from four planetary flybys in the process (Earth in 2005, 2007 and 2009, and Mars in 2007).

The entire spaceship was equipped with innovative solar panels that powered everything from its onboard instruments and subsystems.

The development of low-intensity, low-temperature solar cells was required to ensure Rosetta would still be powered 800 million kilometers away from the Sun with levels of sunlight barely reaching 4% of those on Earth. The technology was also designed to ensure Rosetta’s survival in icy conditions past the asteroid belt separating Mars and Jupiter. Engineers tested the resilience of the spacecraft’s instruments at the European Space Agency’s facilities in the Netherlands, varying temperatures from 150 degrees Celsius to minus 180 degrees on outside surfaces without causing damage.

The individual solar cells are made of silicon and can generate anywhere between 400 watts to 1,500 watts of power based on the spaceship’s distance from the Sun. The power is controlled by Danish company Thrige Holding A/S’s module and stored in NiCd batteries.

So far space exploration missions have relied on nuclear fission for power generation, specifically plutonium-238. Somewhere along the Cold War, the radioisotope evolved from being used in the development of nuclear weapons to the progress of space exploration. Voyager II, for instance– the probe famous for its Golden Record– continues its exploration beyond the Solar System fueled by pellets of plutonium. Plutonium-238 doesn’t occur naturally on Earth, and everyone today is running out, including the U.S. which has had to rely on Russia for supplies in the past.

Although the Rosetta spaceship presents us with an alternative technology to further our knowledge of the cosmos, it may in the end also be its downfall.

After a successful touchdown on the comet, the Rosetta’s robotic lander, Philae, bounced into what appears to be the shadows of a cliff, away from its irreplaceable source of energy– the Sun. With a near-by date of expiration, the lander urgently began to work, starting with analyzing samples taken 25 centimeters from below the comet’s surface.

With Philae’s battery now dead, the robotic lander has stopped transmitting information long before its projected end date of March 2015. Fortunately, all data was recovered before the lander went to sleep. With some luck, it may just wake up again once it gets closer to the Sun, so that our quest to “go where no man has gone before” may resume its course.

Hopefully solar technology will improve so that we may continue exploring space and other planets without resorting back to producing harmful radioisotopes here on Earth.