Everything You Need to Know About Solar Inverter Types 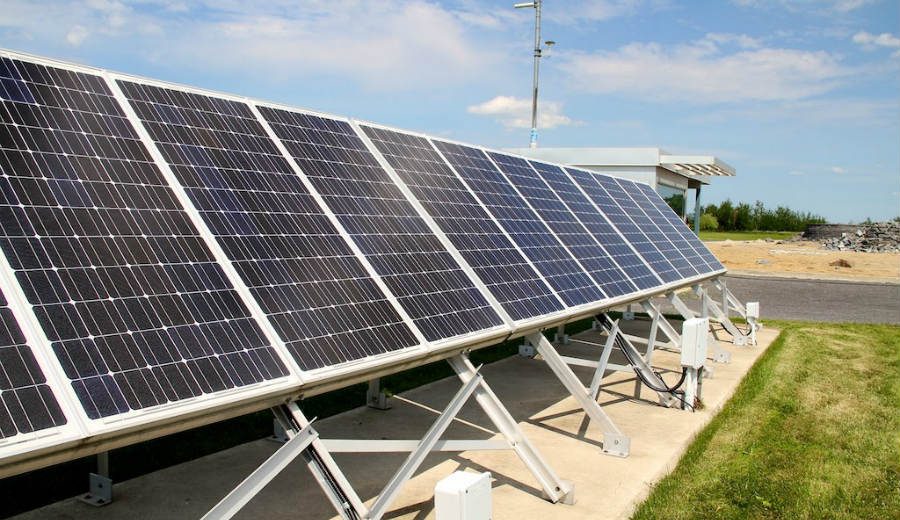 If you are considering going solar in your home, you are no doubt wondering what all the fuss is about solar inverter types.

What is a central inverter? What is a micro-inverter? Is one better than the other?

We could go on for literally pages and pages about the different types of solar inverters, and could probably leave you even more confused than you are right now. So, rather than make things any more complicated than they need to be, let’s talk about solar inverters in easy-to-understand terms so that you can decide which type of inverter is best for you and your family.

What Is a Solar Inverter?

A solar inverter is simply a device that converts the electricity that your solar panels collect from DC to AC household current. In other words, you take the energy from your solar panels and use it to operate the appliances and devices that you plug in – your TV, your computer, your microwave and so on. The panels in and of themselves don’t create the power – they need an inverter to make it happen.

There are two types of inverters – central and micro. So, what is the difference?

What Is a Central Inverter?

A central inverter is the type that is the most common. It is also known as a string inverter. This is the least expensive option for homeowners in the United States who are using solar power, and it is the most effective type of solar inverter for homeowners who have roofing that is not shaded during the day, and is not facing in several directions (gabled, for instance).

With a central solar inverter, or string inverter, your solar panels are arranged in strings, and they deliver the power that they harvest to one main inverter. This main inverter transforms the electricity that the panels provide into AC current that powers your appliances.

This type of inverter is called a “string inverter” because it works on panels that are installed in sequence, or in a string. They are connected together, and then fed into the inverter. This type of technology has been used for a long time, and it works well for most applications. The downside is that if your solar panels are likely to be under shade, then the power output from the string will be reduced to its lowest level.

You could think about this in the same way as trying to run water through a hose – you could have a hose that is 50 feet long, but if there is a kink six feet in, what do you suppose is going to happen? There will be no water running through the rest of the hose. It’s the same way with your string inverter – you could have a ton of solar energy running through most of your panels, but if they hit a point where nothing is coming through, the whole system is only as good as the weakest link. In fact, one of the most common issues with central solar inverters is that they end up being subjected to shade.

You could, of course, remove the source of the shade – cut down the tree that is causing the shade, for instance. Or you could place the panels where they won’t be in the shade. But circumstances can change, and a central inverter that isn’t getting shade today could conceivably get it tomorrow.
Who Makes String Inverters? There are a lot of companies that make string inverters. Fronius, ABB/Power One and SMA are just a few. 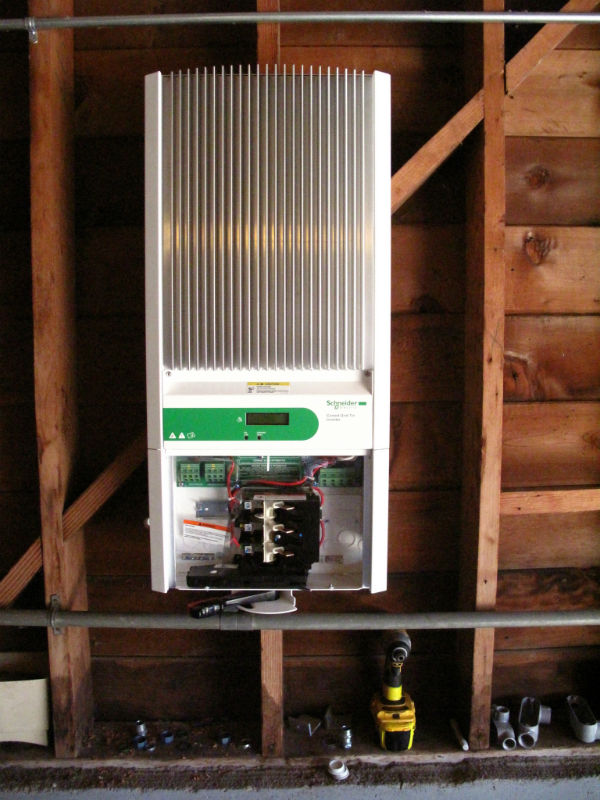 This type of solar inverter is much smaller than a central inverter, and because it does not work in sequence, a problem with one inverter will not affect others in the sequence. If one panel goes bad, the rest will still deliver power. It is something like the way your Christmas tree lights work – you know how frustrating it can be when you have one light go out, and all the rest die too. With micro-inverters, any one in the string can go out, but the others will continue to work. You could have a panel that is blocked by leaves, snow, or anything else that could cause it to lose its view of the sun, but the others will continue to work. This is because each and every panel is a unit in and of itself.

Another advantage to micro-inverters is that they come in sizes that will suit any home. Central inverters are limited in terms of power ratings. Because of this limitation, you could actually end up, if you are on a central inversion system, paying for a system that delivers more than you actually need. Micro-inverters, on the other hand, are customizable. You will end up getting no more and no less than what you actually need from your solar inverter. 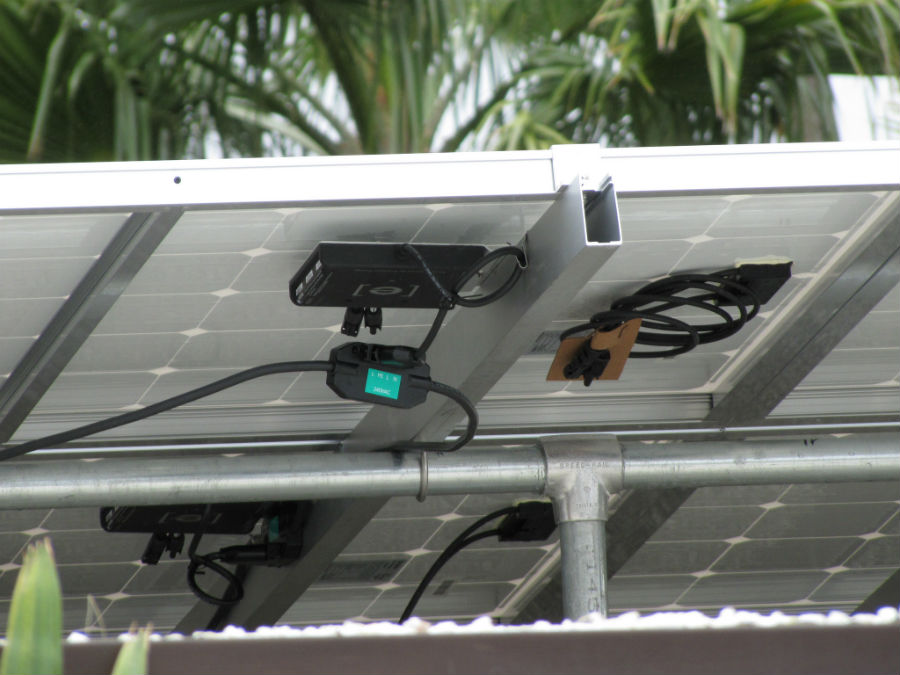 Micro-inverters are also more reliable than central inverters. This is because they don’t use as much power, and they produce less heat. They last longer. Accordingly, they offer more warranty protection than less reliable systems. Most providers will warranty a micro-inverter for anywhere from 15 to 25 years, as opposed to 5 to 10 for central inverters.

Having told you about all the benefits of micro-inverters, we do have to tell you that they are more expensive than central inverters. This is because they duplicate all the parts of a central inverter, and the technology is new. As is the usual case with technology, though, the price will likely drop in years to come. And in the meantime, the superior technology of the micro-inverter should work to offset the higher cost.

Right now, Enphase is the top player in the industry. There are also a lot of other companies that make micro-inverters, like SunPower, APS and Enecsys. SMA is also working on micro-inverter technology.

No discussion of solar inverters would be complete without talking about power optimizers. These are much like micro-inverters in that they are located in the individual panels instead of in sequence. The difference is that they do not completely convert DC to AC – they “condition” it instead, and then send it to an inverter, resulting in higher efficiency than what you get with the traditional transfer to a string inverter.

The advantage is much the same as what you get with a micro-inverter, in that the impact of shading is reduced. Power optimizers are also more cost-effective than micro-inverters.
Who Makes Power Optimizers?
SolarEdge and Tigo Energy are the main makers of power optimizers.

Pros and Cons of Inverters and Power Optimizers

Having said that, though, micro-inverters do tend to do well in harsh environments. Your roof is not overly electronics-friendly, but manufacturers of micro-inverters understand this and construct their components accordingly. Generally speaking, you are probably equally safe with a central inverter or a micro-inverter system.

Again, you are probably well off with either system. Maintenance and replacement may be a bit more costly with a micro-inverter system, simply because there are more components and accordingly, more that can go wrong. You may also end up in for more in terms of replacement parts.

With either type of system, you may end up having to expend a bit of effort if you need to make a claim on warranty. Sometimes, the warranty will cover the unit, but not the labor, so it makes sense to understand the terms of your warranty. And again, when thinking about your system, the more parts that will be needed, the higher the cost, and not all warranties cover full parts and labor.

When you are thinking about solar inverter types, you need to keep in mind that they are a very important part of your solar system and that they can be costly to repair or replace. They perform the essential function of converting DC to AC electricity so that you can run your home appliances.

When considering the benefits of string inverters versus micro-inverters you have to think about what you expect from your solar energy system. You might be able to get more power from a central inverter in the short term, but over the long term, a micro-inverter might work better for you. It is difficult to say which system is better. You will have to think about what you want in terms of energy production – do you want to live the same way as you would if you were “on the grid,” or will you be just as happy with a bit less in the way of power production – do you really care, for instance, if you can watch Netflix 24/7?

It really all boils down to how much power you want and need. String inverters will usually give you more power, but at a greater cost. Micro-inverters will give you nearly as much power, and not cost you quite as much. It’s entirely up to you.If your main purpose for considering solar power is to save money, then you really have to consider the ways that solar works, and you have to consider the benefits of string inverters versus micro-inverters.

If all you care about is your carbon footprint, that’s one thing, but if saving money on energy is important to you, then you really do have to consider your costs and make your decision accordingly. Solar energy can save you a bundle if you do your homework before going solar.