Sunrun vs SolarCity: What Do Customer Reviews Say? 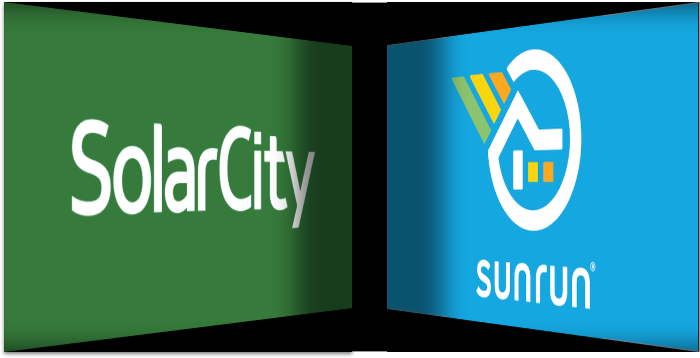 A comparison of customers' opinions regarding two solar giants

SolarCity and Sunrun are the two biggest residential solar installers in the US. Together, they account for about 40% of the entire solar market, with SolarCity at 30% and Sunrun around 10% (p.12).

If you've thought about installing solar, you're probably familiar with these two companies and you've probably wondered which one's better: SolarCity vs Sunrun.

You’ve probably seen SolarCity’s table at Home Depot and, if you shop in bulk, you’ve probably seen Sunrun at Costco as you walk out. Both companies work in almost identical states, from California in the west to Florida in the south to New Hampshire in the east. SolarCity works in Virginia as well – the only difference we could find.

They both offer very similar financing options (cash, loan, lease, PPA﻿﻿) and similar products. Even though SolarCity is now owned by Tesla, both companies even install the Tesla Powerwall!

With so many similarities, how do you decide between Sunrun or SolarCity? Of course, cost is of the utmost importance, so get an estimate from both. However, with solar leases lasting up to 20 years, customer experience and support are important considerations as well.

Today let’s turn to customer reviews to see what people actually have to say about working with Sunrun vs SolarCity. We'll decide which company provides better service, has the easier installation process, and generally happier customers.

As our first step, let’s look at the actual customer review scores for both companies on a few different online platforms. Review ratings are current as of October 2017.

You can see that Sunrun scores a full point higher than SolarCity on review site SolarReviews, though Sunrun sees only a fraction of the total number of reviews SolarCity does.

Of the SolarCity reviews, 58% of reviewers gave them 0 stars, while 31% gave 5 stars, with the other 10% scattered throughout the middle (which is common for solar installers). Sunrun received more even treatment, with just 2 reviewers giving 0 stars and 5 reviewers giving 5 stars.

SolarReviews is an online review site specifically designed for the solar industry. Customers can leave scores for installers as a whole as well as each facet of the installation process, from the initial sales experience to installers’ professionalism. Here’s how each company’s scores compare: 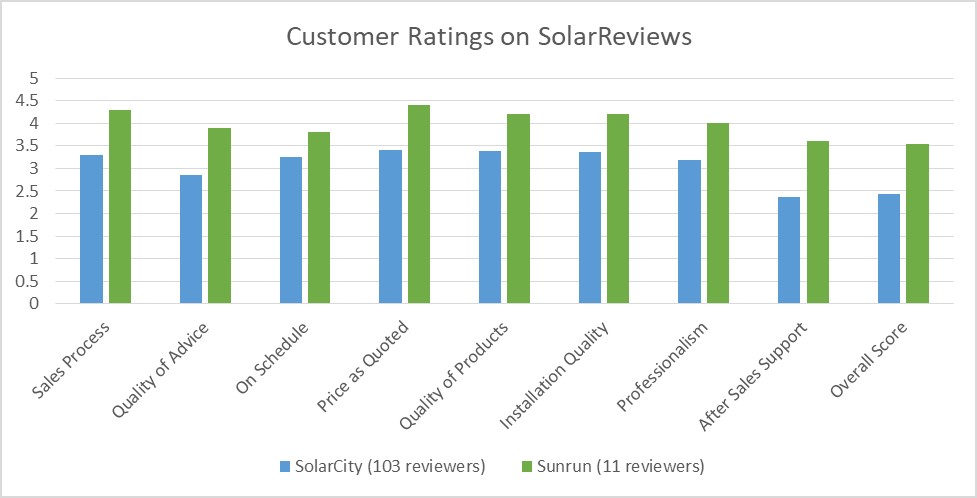 In each category, including the overall score we looked at above, Sunrun enjoys about 20% higher scores.

Sunrun looks pretty good so far, but remember we’re only basing our analysis on 11 reviews. Let’s check out another platform to see if Sunrun’s lead holds.

On review site Best Company, Sunrun pulls even further into the lead, enjoying a full 7 stars compared to SolarCity’s paltry 5.4 stars. And unlike the SolarReviews above, both installers enjoy hundreds of reviews on Best Company, giving us a much more trustworthy overall score. 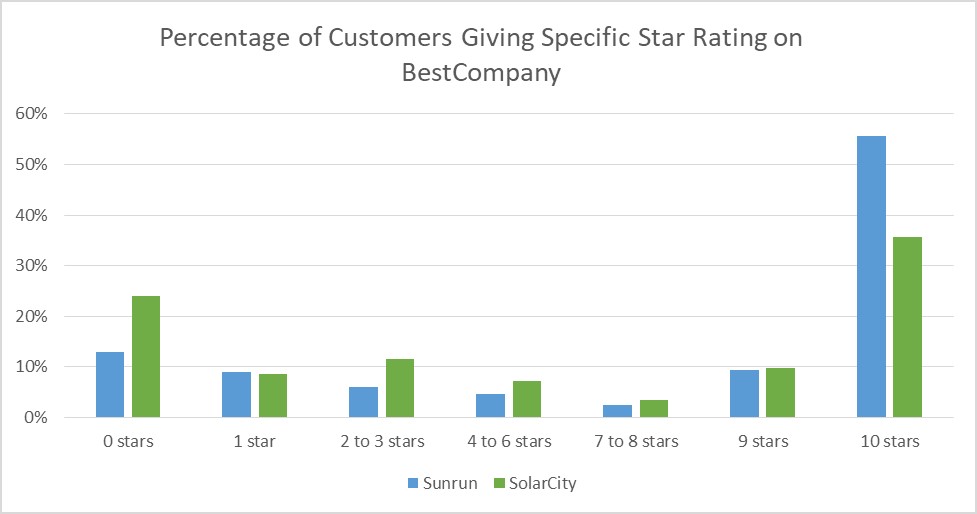 Sunrun is certainly pulling away from SolarCity in the review department, but let’s check one more platform just to be thorough.

Even on Yelp, Sunrun enjoys much higher reviews than SolarCity. Again, it’s not the number of reviews. Each has more than 160 reviewers.

What are people saying about these companies, and why is SolarCity so much lower? Let’s take a look at what actual customers think about each company by diving into specific reviews.

Customers praise Sunrun’s general professionalism and customer service before and during the installation.

Here’s a piece from Rich W.’s review on Yelp:

Throughout the process, the Sunrun team professionally – and patiently – handled all requests from the city building inspector in my area (one who is particularly known to be persnickety and for making additional demands). I was able to track progress on the Sunrun customer portal, as well as emails from Sunrun and calls from the project supervisor.

I am delighted with the way that Sunrun handled the installation, and we are particularly happy that our electrical bill has gone down substantially!

Here’s another, from Ronald F., on Best Company:

Thank you Sunrun, the solar experience was outstanding. From the management team, coordinators & staff the professionalism shown was exceptional. Everyone was knowledgeable & explain [sic] the process before each installation. The cleanup afterwards was immaculate. I would without a doubt, recommend the Sunrun team to all. You will definitely notice the difference in your bill, SOLAR is the way to go. Thank you again, SUNRUN it was AWESOME!!!!

Although Sunrun does see higher scores than SolarCity, like any business, they don’t have a perfect track record. A handful of complaints touch on poor sales tactics, but most focus on poor customer support after the installation is complete.

Here’s Mark O. on Yelp about his experience after purchasing a home with a Sunrun system already installed:

My issue with these folks, and the basis for the one-star review, ifs [sic] the poor customer service they provide. It’s truly awful and I can’t think of a company that does it a worse job at it. It didn’t seem to matter what issue I was calling about…simple things like updating a phone number didn’t get completed. And when I would call back, they didn’t seem to have any record of the previous call so I would have to explain it all over again. And they routinely goofed up my payments, which are made electronically and include the account number in the memo line. The employees are professional and seem intelligent….so I suspect the root cause is outdated/poorly maintained systems and piss-poor Policy & Procedures. They make the most simple task seem extremely complex.

Here’s another review, this one from Donald C. on Best Company, also complaining about Sunrun’s poor post-installation support:

My inverter was removed for service the last week in May… They said it was going to take a month to repair… Well after one month it was still not finished and I called for a status update… They couldn’t give me any information and said they would call me back… Never got a call back and have sent three emails to customer service regarding this issue since then with absolutely no response.

Of course, SolarCity has positive and negative reviews as well. So let’s take a look at a few of them.

Just like Sunrun, customers praise SolarCity for the ease of the installation and professionalism of the staff. Here’s Anand S. from Yelp:

Complete professionals in their work and in communication. Never any surprises, they always give you the complete picture along with immediate steps in the process.

Getting solar panels installed by them was probably one of the better decisions we have made. Completely satisfied and highly recommend.

And another review, from Robert S. on Best Company, praising both the installation and customer support:

Solar city [sic] has been a pleasure to work with from the first contact with the sales group 4 years ago to the total replacement of our panels yesterday due to a panel design issue. Solar city [sic] has always answered my phone calla [sic] and returned calls promptly. They have always responded to any email sent within 1 business day. I am very happy I chose Solar City [sic]. They take pride in their workmanship and stand by their products.

Complaints about SolarCity typically follow the same path as Sunrun, mostly around poor customer service after the installation is complete. Here’s Linda H. from Yelp, complaining about how SolarCity couldn’t handle her request to remove panels so she could remodel part of her house:

No one ever follows up and every time I called, I needed to explain my scenario over again ad [sic] again. Needless to say that I am truly disappointed with their incompetence. They may sound and look efficient but no customer service for me.

#4 Analysis of Sunrun vs SolarCity Reviews

You can see from the above reviews that both SolarCity and Sunrun can provide excellent experiences as well as extremely poor experiences. However, I think we can say that more customers enjoy their experience going solar with Sunrun than with SolarCity.

Both companies have dozens of individual branches, so your experience can vary from what the review scores above would lead you to think. Some SolarCity branches provide wonderful customer service and quality installations.

At the same time, some Sunrun branches probably don’t have great customer service. (This is why Yelp is so nice, as you can see the score for each individual branch, not the company as a whole).

But, if you’re going in completely blind, it seems like Sunrun is the safer bet.

#5 Should I Work with Sunrun or SolarCity?

As the reviews above show, overall Sunrun provides better customer service than SolarCity. However, if you’ve got a friend or family member that is positively raving about their experience with a local SolarCity branch, go for it! As we said, each branch is different and can provide vastly different experiences.

And before you settle on one of these major installers, remember that there are hundreds of smaller installers out there as well! In fact, according to the NREL report linked to at the beginning of this article, these smaller companies install about 50% of all solar in the US. On top of that, they often can provide more attentive service and lower prices due to their smaller size and lower overhead costs.

Of course, if you’re looking to finance with a lease or PPA, you’ll need to go with a larger company that offers these options, as smaller companies don’t have the capital to pay for installations upfront.

Even if you are interested in leasing or PPAs, don’t forget there are many other companies out there. Sunrun might have better reviews than SolarCity, but there are other nationwide installers that enjoy even higher scores. So get out there and start shopping around!

If you’ve worked with SolarCity or Sunrun, tell us about your experiences in the comments below.

Photo by SolarCity & Image Credit under CC Licence from Wikimedia