How to Monitor My Solar System Performance? 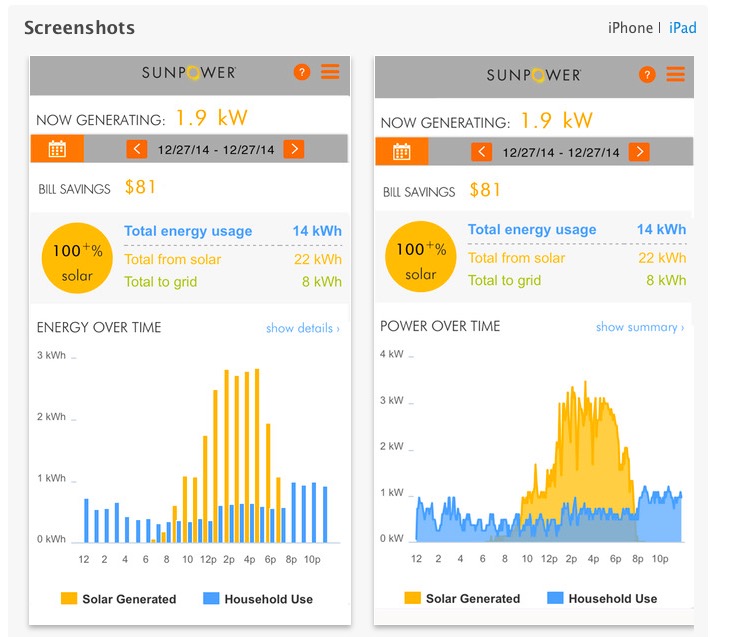 Do I need to buy a monitoring system to check my solar system performance?

Well, yes… and no. Ask yourself this:

1. Am I leasing my solar system – or signing a PPA (a Power Purchase Contract) through a third-party?

If you won’t be the actual owner of your solar system – but merely benefit from the solar power itself through credits that reduce your utility bill – then there is really no reason for you to have to monitor its performance.

In that case, a Third Party Owner (TPO), like SunRun or Sungevity or SolarCity is actually the owner of the system on your roof and it is their responsibility that it performs to specification, not yours.

So the TPO does need to monitor solar system outputs because they (typically) guarantee that it will perform to specifications. Most TPOs will reimburse you for electricity you would have to buy from the grid if your system fails to deliver its full expected performance.

In that case it is the TPO that must be able to see if a system develops a problem, so they can get it fixed right away.

As the solar system owners, selling you power, TPOs do need to monitor performance in real-time, because typically, their contract with you requires that if your system does not supply the minimum expected kilowatt-hours annually, then they are on the hook to reimburse you for the payment you would have to make if your utility must replace that generation.

By monitoring performance, they are able to send a technician out quickly if they see an unexplained downturn in generation.

When leasing or paying by the kilowatt-hour from your solar system; monitoring is a nice-to-have but really not a must-have. A TPO they will usually give you a password to log in, so that you look at the graphs of your own rooftop generation and monitor solar performance daily, weekly, monthly, etc.

2. If I am going to own my solar system, I will need to monitor it.

The need for accurate monitoring applies to whoever is the owner, so – if you buy your system and own it outright – that is a different matter. Yes, you need to know if something is wrong.

If you are going to be the owner of the solar system, you are going to be responsible to ensure that the performance is adequate. If your system does not match its predicted output, it is you who stands to lose money, because, if you are like most solar homeowners in the US, you are receiving some form of payment or credit from your utility for the generation you put on the grid, and you have factored this payment or credit into how you are recouping your upfront investment.

So if you are planning to own your own solar system, it does make a lot of sense to monitor performance.

If you don’t monitor your solar system, you won’t be aware of the problems.

Solar installers usually offer warranties on parts and labor and any glitches that may have occurred during installation that may have begun to negatively affect the performance.

According to Engineering.com’s What is the Lifespan of a Solar Panel

Here’s what NREL has determined about current Degradation Rates. What does this tell us? Gradual deterioration over the years is so infinitesimal, that a cost/benefit analysis suggests that it would be a complete waste of time to monitor your array simply to find out how fast it is losing efficiency.

3. So, what would I need to track to see if something went wrong with my solar system?

Even when you are the array owner, there is still not very much that you need to monitor, actually. But you do need to see enough detail to know when something is not operating correctly.

To know if something is wrong you need to check daily power curves and daily, monthly, annual, and lifetime energy production graphs.

Your monitoring should show how much power your solar system is making, with all the daily power curves and daily, monthly, annual, and lifetime energy production shown in both numbers and graphical displays.

You really need only actionable data: Has anything stopped working? If it is sunny out, and yet the power of your 4 kW system has slipped to 3 kW, you will know right away to get it checked out.

It is pretty rare for solar panels to stop working, actually, but over the 20-40 year lifetime, when something does affect their performance, it is important to fix the problem.

4. What might cause my solar system to stop working?

What sorts of problems have been encountered? Pecan Street carried out a painstaking study of a total of real world systems in Texas and found that very few solar systems had problems, and that the problems were easily remedied. But detecting that something was wrong was much more difficult.

Because solar PV systems are located outdoors and contain sophisticated electronics, it is not uprising that some minor maintenance problems might arise.

Most of the problems encountered were fixed with less than $25 in parts and less than an hour in labor.

Fixing the problems turned out to be much harder than detecting them, however.

What the Pecan Street study uncovered was that even when homeowners have access to their system’s performance in real-time, it was difficult for them to detect unusual generation patterns that would indicate that something is wrong.

The Pecan Street study found that it can be more difficult for individual solar system owners to detect maintenance issues than it is for a TPO, even when they have access to the exact same generation data.

This is because a TPO has context. A TPO typically has other systems they are monitoring, sometimes even on nearby houses under identical weather conditions. With neighboring rooftop solar acting as a “control group” it is immediately clear if a nearby customer’s solar array is performing below spec. Because of their focus on detecting issues, a TPO is much better able to detect anomalous performance.

By contrast, a homeowner typically has no “control group” of comparable solar systems nearby to compare their own system’s performance to.

5. What is the best interface for monitoring my solar system performance?

Beware of getting caught up in an overly geeky numerical display. Human nature being what it is, monitoring that provides useful info in a “quick glance” format is much more likely to continue to be checked over time.

An online interface with easy-to-absorb graphical data is a must. Choosing a monitoring system with a user-friendly interface is critical.

Here’s an example of what to avoid. You really can’t be going down to the garage and watching little numbers change and writing them down on bits of paper, and adding up for each panel, each minute, hourly, etc, to get an overview of performance. Unless you have OCD and a LOT of time on your hands.

So check whether the monitoring display makes quick intuitive sense to you before choosing a solar monitoring system.

Ideally, you should choose a monitoring system that you can easily access online so you can quickly and check performance at your convenience, as frequent checks will give you a sense of how your system should be performing in certain weather conditions, seasons and times of day.

The user interface should be simple and obvious, so you can absorb the information at a glance, like the excellent monitoring system supplied to SunPower customers.

Some monitors can also show when you are generating excess power to the grid: a good time to set the dishwasher to start to soak up your excess!