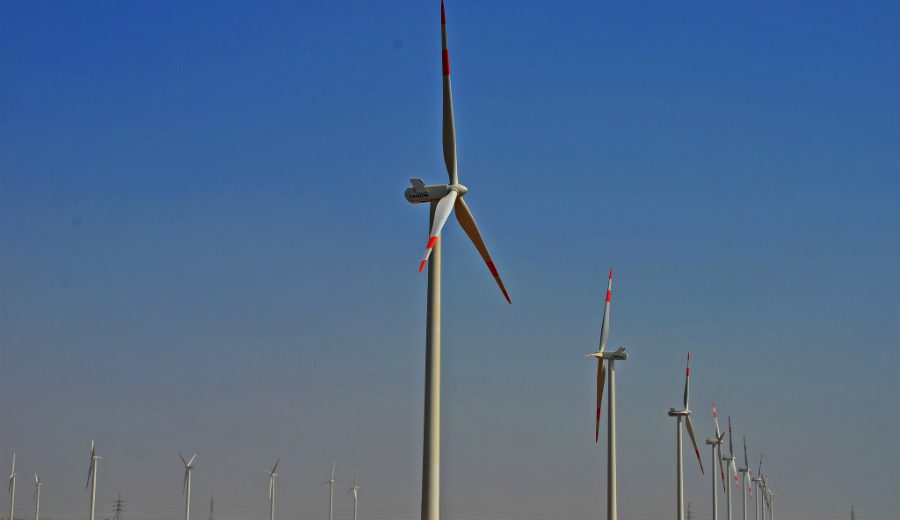 The study concludes that electricity prices could remain flat if the US could site projects for maximum generation – unconstrained by the current lack of a national HVDC grid – connecting the best carbon-free resources to load centers.

A National Electricity and Weather Systems (NEWS) modelling tool was employed to find a way to reduce, by the maximum amount possible, the CO2 that drives climate change, but while also not increasing the price of electricity.

The new modeling tool was built by top scientific researchers at the National Oceanic and Atmospheric Administration (NOAA), and their resulting hypothesis is generating new discussion about the advantages of investing in a nationwide HVDC system, long thought too expensive and difficult, given the multiple “Balkanized” bureaucracies that new transmission lines must go through.

The NEWS tool combined high spatial (13-km) and temporal (60-minute) resolution over the US, and combined it with comprehensive cost and price information from the Energy Information Administration (EIA) database.

The scientists found that combining weather data and maximum solar and wind resource maps, and then siting wind and solar farms in the regions of maximum potential, and connecting these – often far-flung – sites to energy demand regions using HVDC transmission, achieved the most significant carbon reductions at the lowest cost.

“We can place the generators in better areas when we are thinking about the highest value energy to meet the grid’s hourly demand, as this model does,” said Chris Clack, a research scientist with Cooperative Institute for Research in Environmental Sciences at NOAA told Utility Dive.

The study concluded that even using only existing technologies, and without adding storage, it would be possible to greatly reduce CO2 emissions; by up to 80% relative to 1990 levels, by enabling the best resource siting for utility-scale solar, wind, hydro and nuclear with the addition of an HVDC grid.

Why the scientists did not include rooftop solar

While rooftop solar is an important market, the researchers did not investigate it as they were looking for the cheapest options with the fastest and deepest emissions cuts.

The higher installed cost of rooftop-by-rooftop distributed solar does have other benefits, like creating more jobs per watt, and other advantages to individuals, like not having to wait for slow-moving utilities to act on climate, or having a set price guarantee over a long period. But these potential system benefits were not in the brief.

The scientists were tasked with finding the optimal solution that kept prices down. This meant they could not rely on private decisions by individuals to decide to go – or not to go – solar

Even though in many jurisdictions, rooftop solar is cheaper than what utilities charge to “rent” electricity, compared to the mass-production efficiencies gained in building utility-scale solar, rooftop is more expensive.

Rooftop solar is limited by the available real estate. Some estimates suggest that as much as half the households in the nation can not go solar because they live in apartment buildings with a low roof-to-demand ratio, or that they only rent, have low credit, or are only temporarily living there.

Costs are 50% to 100% higher for distributed solar, according to the paper. The goal was for the model to show how to supply electric demand “for every hour to every market” without costing more than current electricity. 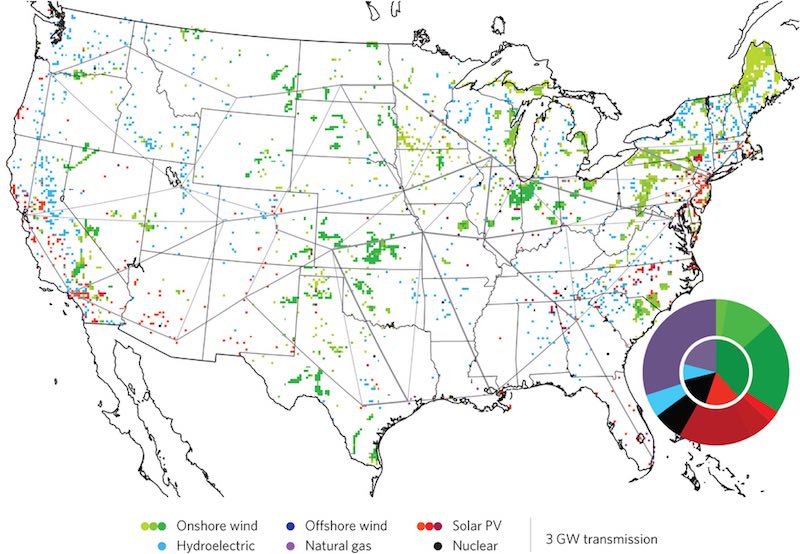 Permitting difficulties have long been the obstacle to HVDC. So the idea of under-grounding the HVDC lines next to highways and railroads is a real breakthrough solution.

Getting transmission permitting through the regulatory process is nearly impossible. Transmission lines must cross county lines and state lines, and must get approved by new bureaucracies within each county and state line crossed.

But there is one exception. The Federal highway system. (And the railroad right-of-way) 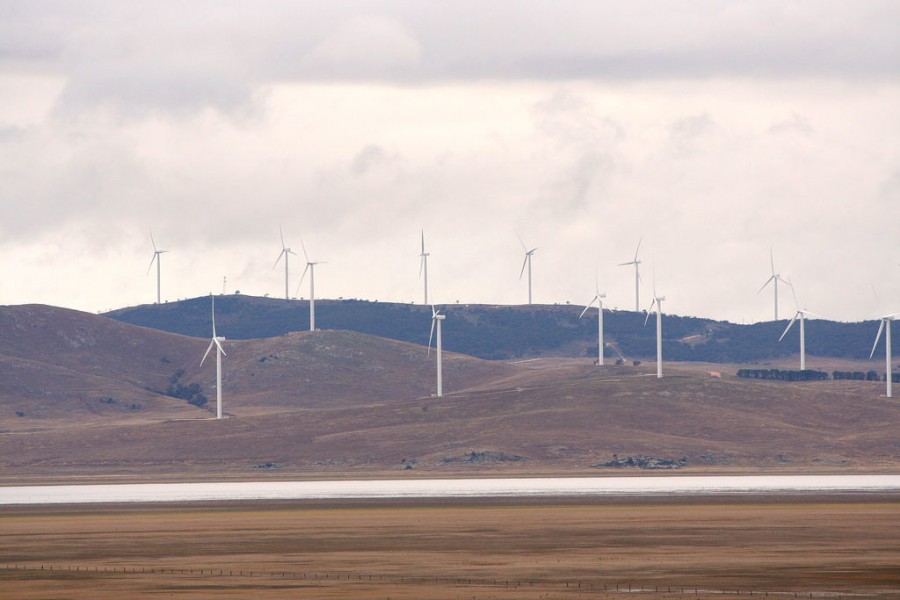 So NEWS didn’t consider the challenges of normal above-ground transmission development across open land. Even though it is more expensive to bury the transmission lines, ultimately the costs pencil out in achieving the buildout on time, because there is virtually no opposition to undergrounding transmission – nor to siting it next to Federal highways.

Clack explained that if the cable was buried under ground alongside railroad tracks and interstate highways, the permitting nightmare would be eliminated because the Federal government the federal government would have jurisdiction to grant undergrounded ROWs.

Laying cables underground alongside the highway system only would require one OK – from the Feds -because this would be a national undertaking.

There is a precedent for such massive public works. In the nineteenth and early 20th century, the telegraph lines were built along railroad right-of-ways. Even much of today’s fiber optic network was laid along Federal highways.

Since the rail lines are owned by private companies, the railroads were paid for their cooperation in fiber optic cable.

Both railroad lines and highways already do go wherever these lines would need to go. “I am confident the railroad companies could see the economic opportunity,” Clack said. “In addition, having trains lay these cables would be easier than doing it with trucks.”

“There’s a new normal out there,” electric utility expert Gregg Edelson of PA Consulting told me after Hurricane Sandy. “These repeated storms that are supposedly hundred year storms are happening every year. The intensity is different. Higher intensity ones are happening more often.”

Compared even just to the cost of U.S. weather-related grid outages, under-grounding transmission makes sense, according to Edelson. The U.S. has far higher losses than European nations, he said.

One estimate of the cost of storm-related electrical outages came to $150 billion a year, the equivalent of 4 cents a kilowatt hour or about 1/3 of the retail average price.

For example, Germany already buried its transmission grid and had only 15 minutes of power outages in 2011. The US clocked in at 240 minutes, more than 12 times as much.

Of course, in those nations, the distances are smaller. But already, in the US, transmission is under-grounded when the lines have to cross rivers that are too wide, or an airport runway, and the Electric Power Research Institute (EPRI) is on board.

“It is something that society should look at,” Steve Eckroad, a recognised technical expert in under-grounding and superconductivity at EPRI told me at that time.

“Different societies do come up with different answers. Some small countries in Europe are mandating that all new high voltage lines, in the Netherlands and Denmark, must be under-grounded.”

NEWS estimated the cost of transmission at about 4% of the total cost, and that doubling that cost by under-grounding would still only raise average retail electricity prices a fraction of a cent per kilowatt hour. Retail rates currently average 12 cents but vary greatly across the US.

However, Ekroad estimated that the cost difference of under-grounding transmission is from 5 to 20 times more, (not doubled as this research says) while cautioning that it’s impossible to determine the actual difference until you know the specific route. In small densely populated areas like NYC, for example, it is cost effective and lines are already under-grounded.

But the researchers are optimistic. And even if EPRI is correct; because the transmission would be only 4% of the total – even if it costs 20 times more to under-ground transmission across some regions – that still wouldn’t impact the total cost by much.