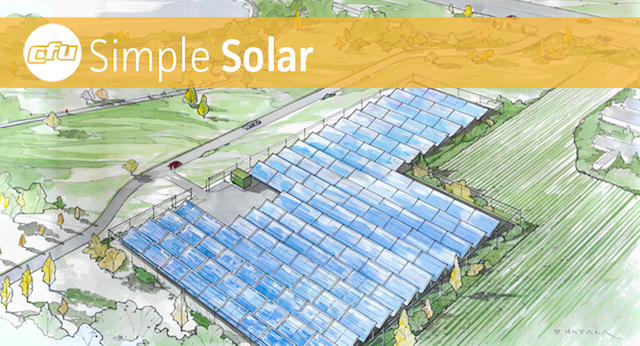 Now Iowans can go solar even without a solar-friendly roof!

Iowa’s Cedar Falls Utilities (CFU) has launched a community solar garden that its electricity customers can buy into, with the opportunity to purchase units of the energy output from the solar array.

Any of the utility’s customers can purchase as little as one unit in the project, representing the energy produced by 170 watts of installed capacity. Customers could buy one or more units. By offering units at $270 each, CFU’s goal was to reduce the entry price, making it possible for more households to participate. They have also offered customers the option of spreading their payment out over 12 months.

The participation reduces customers’ electric bill based on its generation, for the next 20 years. If they want to invest more and save more, they can choose to own more panels, of course, with commensurate savings on their electric bills for the next two decades. With a 1.5 MW project, there are plenty of units of solar generation available representing 170 watts each.

“Community solar gives our customers an affordable and flexible way to use solar energy,” said CFU General Manager Jim Krieg.”We are thrilled with the response, and want to thank the community.”

The community solar project, named Simple Solar now has over 1,200 residents and businesses signed up to be a part of the program.

“We want to thank the community for their response to Simple Solar,” he said. “Because so many of our customers decided to invest in solar energy, we are able to deliver a project that will provide flexible, clean energy at an excellent price.”

According to Krieg, the utility has been trying to find a way to provide renewable energy to customers economically, and the solar garden idea solves the problem.

“Participants will receive a monthly credit on their electric bill for their proportional share of the energy output from the array,” he said. “We will pay the credits for 20 years.”

In Iowa, about half of utility customers don’t have the option for behind-the-meter solar, because their roof is shaded, or they rent, or they do not have the credit needed to borrow from the bank or get a lease or PPA. But purchasing units of electricity generated by a solar garden is a practical alternative, on a pay as you go alternative.

After all solar reduces the amount you pay for electricity. Why shouldn’t even those who need to save money most be part of the savings!

One of the biggest solar arrays in Iowa

The 1.5-megawatt project will be up and running by early 2016, and according to CFU will be the biggest community solar project, as well as one of the largest solar arrays in the state.

It will be built near Prairie Lakes Park in Cedar Falls on eight acres leased from the city of Cedar Falls. ”