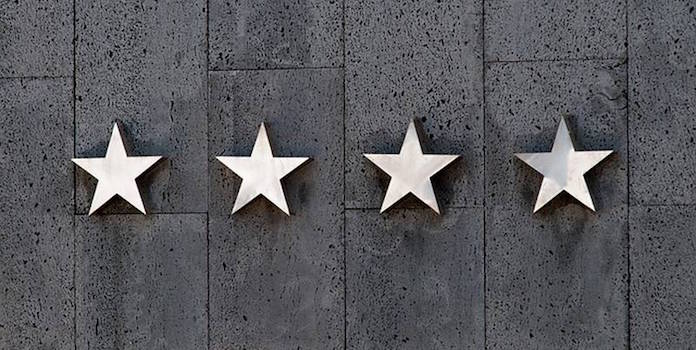 Real Goods Solar (now known as RGS Energy) was founded in 1978 – quite old for a solar installation company. They currently work in 11 states, both installing and financing (via loans, not ﻿﻿﻿lease﻿﻿s﻿ or PPAs) residential solar installations.

All of this is great, but if you’re thinking about working with RGS Energy, you want to know what their customers think of them and how they compare to other solar installers, regardless of how long they have been around.

Let’s take a look at Real Goods Solar reviews, see if we can find some patterns within the complaints and compliments, and find out if you should work with this well-known installer.

For the most accurate view of RGS, let’s first take a look at their average ratings from a handful of different review sites.

If you write enough of these analyses of solar installer reviews, you begin to see a pattern. Company ratings are typically very average - 3 out of 5 stars. When you dig a little deeper though, you find that very few customers are actually giving them 3 stars. Instead, about half are giving 5 stars and the other half are giving 1- or 2-star ratings.

RGS currently enjoys a 3.7 out of 5 stars based on 27 reviews on Consumer Affairs. For a solar installer, that’s actually not too bad. Let’s see how the ratings break down:

As you can see, the majority of reviewers gave RGS a 4 or 5 star review. However, 20% of reviewers gave only 1 star. While we’re certainly seeing the two-sided pattern we discussed earlier (either great reviews or terrible reviews), it’s certainly not as pronounced as some other installers.

Let’s look at a few other review sites for a bit more context.

We’re certainly continuing to see this dichotomous pattern, but again, RGS reviews are actually still pretty good compared to other companies. That 30% is somewhat alarming, but it’s also only based on 5 reviews. Let’s look at a couple more ratings.

RGS actually enjoys a very-high 4.36 out of 5 stars on Solar Reviews, based on a healthy 126 reviews. As usual, let’s dig into the data to see if they follow the typical pattern:

As you can see, the majority of reviews give RGS either a 5 star review or a 1 star review, but most reviewers are clearly praising the company, with 78% giving RGS 5 stars.

Solar Reviews is a site solely dedicated to reviewing solar-related businesses and, with this in mind, users can leave very detailed reviews of their entire experience.

Overall, reviewers gave RGS extremely high ratings (4.2 to 4.7 out of 5) on all categories, including sales, timeliness, professionalism, after-sales support, and many other topics.

All this bodes well for RGS, but just for thoroughness’ sake, let’s take a look at one more site.

All of the review sites above let reviewers leave feedback for the company as a whole. However, RGS is a nationwide installer working in 11 states. Obviously, they need local installers, salespeople, technicians, and customer service people for each area they work in. A customer in Vermont is going to work with an entirely different crew – and therefore have a different experience – than a customer in Colorado.

Thankfully, the review website Yelp allows users to leave reviews of companies’ local branches, not just the business as a whole. This gives you more accurate insight into what your experience will be like working with your specific RGS branch. Let’s take a look at a few scores:

As you can see, reviews for RGS on Yelp are on the lower side, but don’t be too distraught, as few people have even reviewed RGS on Yelp.

Still, to be blunt, those reviews just aren’t very good. Let’s take a closer look to see what people are saying about them.

Overall, Real Goods Solar sees pretty healthy reviews. Obviously some homeowners have issues with their installation, but that’s true of any solar company. In fact, RGS falls less into the “50% zero stars/50% 5 stars” hole than most other national installers.

Looking at reviews of RGS’ rival installers (which we do below), you’ll find that RGS is actually enjoying pretty high scores!

Numbers can only tell us so much, so let’s delve into some actual customer reviews to see what real people are both praising and complaining about Real Goods Solar.

My salesman was knowledgeable and helpful. There was a mix-up with the product (ordered panels were not available) and number of panels that would fit on my roof but I was able to negotiate a better price and able to get higher rated panels for just a wee bit more money. The installation was impeccably done and not so much as a nail was left on my lawn.

We had our PV panels installed early spring. They were very professional, polite, and respectful… The timeline that was given to us from the beginning worked out to be very precise. After we were up and running for several weeks and we received our first bill I felt it was not working right we made 1 phone call they came the next day found the problem and fixed it. The system has been working great since then.

And one more, again from Solar Reviews, on RGS’ excellent customer service and timeliness:

From the moment of our first contact, we received prompt personal service and complete explanations of the work to be done and projected timelines. Installation was slowed a bit by component delivery delays but we were kept informed. All employees who visited our home were polite and considerate… We received periodic updates and personnel were prompt in responding to our inquiries.

There’s two sides to every coin and, just like any other solar company, RGS has had its fair share of complaints as well, typically around poor post-installation customer service for warranty claims, ownership transfer (when s﻿﻿ell﻿﻿ing a home), and maintenance.

Here’s a Consumer Affairs review discussing the poor customer service after their roof began leaking and RGS had already agreed to repair the roof at no cost:

Their customer service department doesn’t return phone calls or emails. Interestingly, the sales department does. A very nice sales person took down my concerns and forwarded my information to customer service. And, still no effort on RGS Energy’s part to contact me. Sadly, it is only a $3,000 repair. If they can’t afford that, I can’t imagine how poorly they are doing as a company. I can’t recommend them to anyone anymore.

Here’s another review from Solar Reviews, again complaining about their poor customer service after the installation was completed:

Very positive experience with initial installation and sales person (person left company though). Follow-up service is very, very poor. I am currently on message call #7 over 1.5 week period – without any response or reply from RGS. This is for warranty service.

And one more from Best Company, from a reviewer with a faulty solar panel still under warranty:

Spent 2 weeks leaving voice mail messages with no call back. Finally placed service request on their website (it appears that is the only way to contact customer service). RGS has acknowledged there is a problem that needs to be addressed, but they have not been able to schedule a repair. Currently on week 7 of waiting… I don’t understand why they cannot schedule a service appt. for 1 individual panel. I would strongly suggest looking elsewhere for installation – as their warranty service is horrible.

As we’ve seen, customers generally enjoy working with RGS. Of course there’s always the projects that go wrong, but overall their reviews are mainly positive.

To make it easy for you, here’s a nifty graph we made: 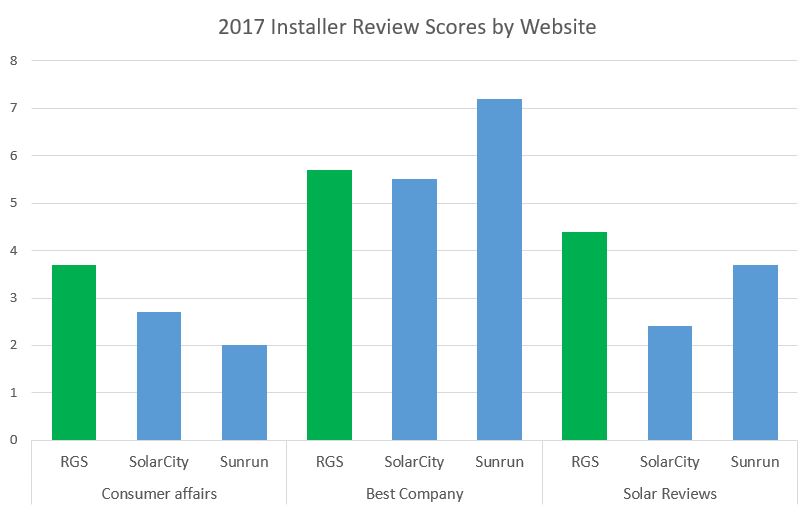 Looking at the reviews from the 3 sites above, we see that RGS holds up really well when compared with Sunrun and SolarCity. In fact, if you look closely RGS’ review scores are beaten only one time: Sunrun reviews on Best Company are higher than RGS (in fact, Sunrun is ranked #2 out of all solar companies on the site).

#6 Should you work with Real Goods Solar?

Both when we look at the details of customer reviews as well as when we compare ratings to other installers, RGS holds up. More than any of the other big installers we’ve looked at, RGS customers consistently praise the company’s installation quality, timeliness, and sales process.

If you’re looking to go solar and want to work with a big, well-known installation company, RGS seems to be a good choice. Of course, things can always go wrong, just like with any solar company, but RGS seems to have less things go wrong than other companies, or are better at handling bad circumstances. Either way, it’s a testament to their business’ organization and employees.

We’ve obviously been focused today on RGS’ customer experience – their service and support, installation quality, and sales process. One thing we haven’t discussed, though, is cost. With solar being a money-saving venture, cost is obviously hugely important.

It doesn’t matter how great a company’s customer experience is if they’re so expensive you can’t save money by going solar! So even though RGS has great reviews and even if you’ve decided they’re the company for you, be smart and always reach out to a few installers for quotes and to discuss their options – you just never know.

All that being said, if the cost is right, according to reviews and customer experiences, RGS is a pretty safe bet to have a quality installation and great experience going solar.