Solar is California’s One Beacon of Hope During Drought 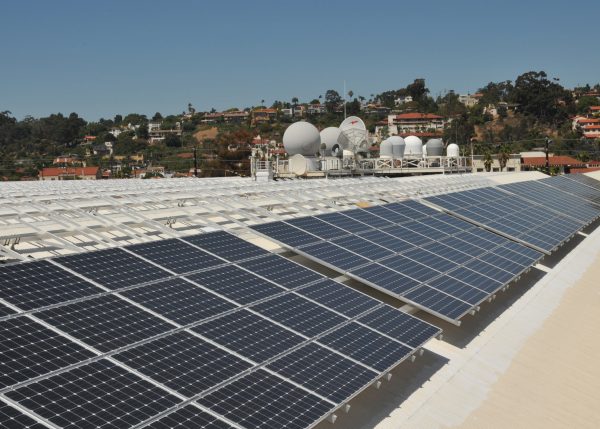 The California drought — which has reached state emergency levels — has brought all kinds of disasters on farmers, miners, and hydropower production. However, in the spirit of optimism, there’s one shining beacon of hope during this mess. Fewer clouds and rain means more sun, which in turns means more solar power.

Over the last two years, California solar power has grown exponentially. According to the Solar Energy Industries Association (SEIA), the state has nearly 10,000 megawatts (mW) of solar, which is enough power to meet five percent of its citizens demands last year, along with more than 250,000 solar projects — half of the nation’s total. Half of that power comes utility-scale solar systems, while rooftop solar continues skyrocketing.

Solar and the Drought

So what does this increase in solar power mean for the state as a whole? Grist had Clean Power Research (who measures solar radiation for solar power industry clients) in Napa conduct some research. They found via tapped satellite data that the last four years have greatly increased winter sunshine, thus producing far more solar power than the historical average wintertime output. For example, “a typical rooftop system in San Francisco put out a whopping 54 percent more than it did during an average winter.”

Now, while fog and occasional thunderstorms of course impair a solar system’s ability to capture that much solar energy, it won’t need to rely on those storms. Since utility-scale photovoltaic solar power systems are drought tolerant and use barely any water to operate (just a small amount for cleaning), they’re perfect for this onslaught of sunshine. Compare this to thermal power plants, which use tons of water to produce steam and cool equipment.

California legislature recently proposed upping the numbers on renewable energy to 50 percent by 2030, which would cut the water power plants use in half. This kind of water conservation could help save the state from catastrophe, especially if the next winter yields just as little rain and snowfall as this year.

It’s a lot to consider: how does California best conserve water while still producing much of the nation’s agriculture? How does one of the largest states live and power itself on less and less water? It looks like solar power capacity is coming just in time. What drought — there’s an abundance of sunshine ready to power the Golden State!

What do you think of California’s solar goals? Do you think solar power can help alleviate the drought? Tell us in the comments!