This Solar Powered Home Can Go With You Anywhere 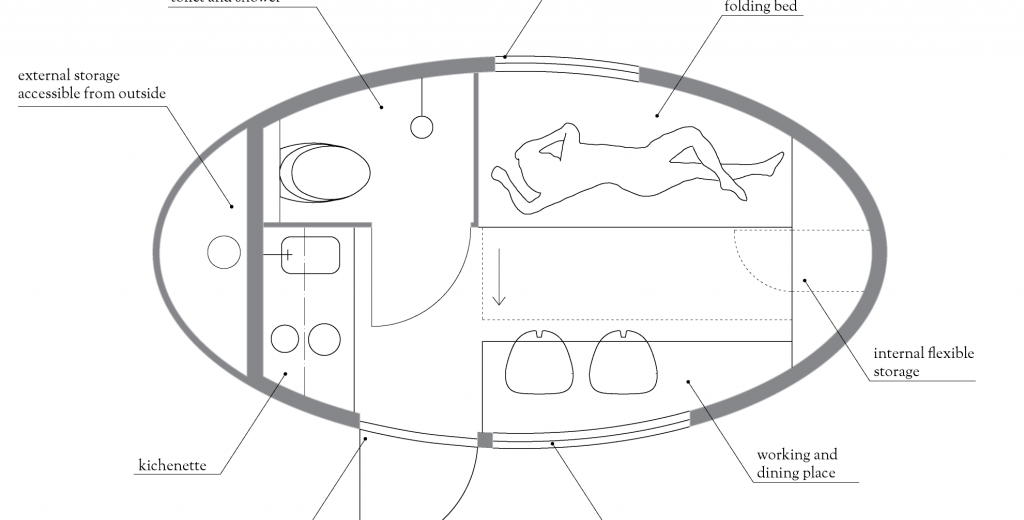 Imagine waking up in the morning to the roaring sea as you saunter out of your tiny home turned beachfront cottage. Or putting out the campfire and getting a good night’s sleep under the stars as a tiny home serving as a yurt. Gizmodo reported on Ecocapsule, a brand new tiny smart home, is “the first truly independent micro-home” as it is powered 100 percent by sun and wind.

Ecocapsule is a compact, low-energy house that combines off-grid capabilities with the luxuries of small living. Think of it like energy efficient camping, big enough for two adults (or one if you don’t like to share).

The very cool features in this smart tiny home include clean energy dreams: padded walls with high performance thermal insulation, and a capsule with water filters installed in the upper surface that remove rainwater bacteria before funneling it beneath the floor. Everything in this pod house works to reduce energy requirements and maintain a temperature indoors that’s comfortable no matter the weather outside.

There’s also a built-in kitchenette, flushing toilet and hot shower you can take with you into nature. Given that you can take this home anywhere by hitching to the back of your car, it’s soon to be an amazing alternative to the tiny home craze, and one that powers itself all through clean energy. P.S. — the Ecocapsule’s 9700 watt-hour battery will charge an electric car for you.

With a simple and modern design, the Ecocapsule is certainly elegant and futuristic all at once. And its tiny size — 14 x 7 x 7-foot — means that contemporary look makes its small stature even more appealing.

Although it’s small, Ecocapsule is “powered by a built-in wind turbine complemented with an array of solar cells,” according to their site. The dual power system of solar and wind, plus a high-capacity battery, ensures that there’s enough power during times when solar or wind activity is low. In fact, there’s 2.6 meters of high-efficiency solar cells covering the body of the house, while a retractable pole holds a wind turbine.

That’s an installed power output of 750-watts of wind and 600-watts of solar — in one house! As a result, the pod has its own energy system that can support you in off-grid locations. Additionally, the spherical shape is optimized for the collection of rainwater, with those built-in water filters letting you utilize any water source.

The architectural studio Nice Architects in Bratislava, Slovakia is the genius design team behind the Ecocapsule. But you can’t buy one just yet. While Ecocapsule appeared at the Pioneers festival in Vienna at the end of May, and will be available for purchase later in the year, no price has been announced. That said, the functional prototype is finished and they’re in the middle of preparing for production, so get ready to get out in the wilderness and power your next adventure outdoors via solar power.

What do you think of the Ecocapsule? Tell us in the comments!