If you missed it, the video follows, but what we all thought was internet hype may become reality as another company called SolaRoad installs a pilot near Amsterdam.

The project (which is totally unique from that depicted in the video above) is called SolaRoad, and its purpose is to demonstrate how much solar photovoltaic (PV) power could be generated by the surfaces on which people walk, ride bikes, jog, or even drive.

The theory is, since we need roads, sidewalks, and bike paths anyway, why not make them do double duty? Or, as the Dutch say, “De weg die zonlicht omzet in elektriciteit (making roads that turn sunlight into electricity).”

This is strictly a pilot program, and reportedly the first in the world.

Located in the Netherlands, the project capitalizes on the fact that the Dutch are second only to Danes in their love of biking. 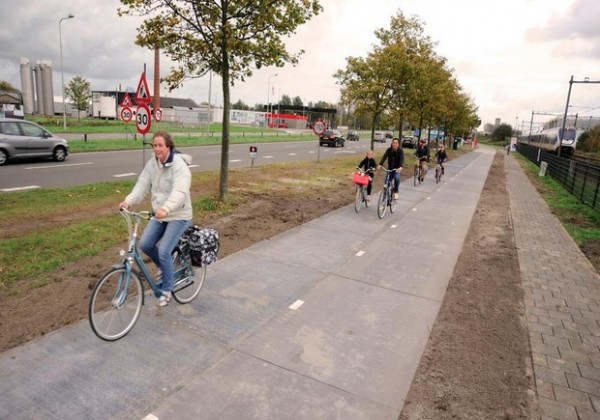 The name–at least in the case of SolaRoad -is a little misleading. The project doesn’t involve a road–which would be a massive undertaking despite what the video above shows–-but rather a bike path in Krommenie, near Amsterdam.

For the first 230 feet (70 metres) of this path, the surface is comprised of rectangles of interlocking concrete paving topped with a 0.39-inch (one-centimeter) layer of crystalline silicon solar cell material, which is then protected by a full inch of sturdy, tempered glass, or enough to support a fully loaded truck. The final layer is a friction coating that prevents bikers from inadvertently turning themselves, and each other, into bowling pins. 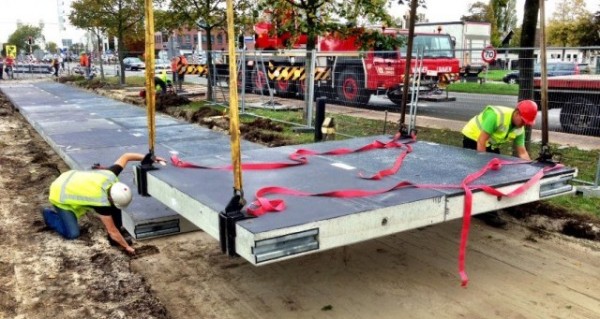 Only one side of the path is solar power-enabled, and its finished length will eventually be a scant 328 feet – just shy of 100 meters. The final effect, from an observer’s point of view, is like looking down at an enormous modern electric cooktop, all gleam and gloss but with a grid pattern instead of holographic rings. The “un-solarized” side of the road will be used to determine the most durable wear layers, say technicians.

Conceived as a source of power for the electric cars that will eventually (and hopefully) use something similar, the SolaRoad will allow solar energy engineers to calibrate the value of similar solar surfaces for onsite solar power.

“In time, the solar power from the road will be used for practical applications in street lighting, traffic systems, electric cars (which drive on the surface) and households,” say developers. 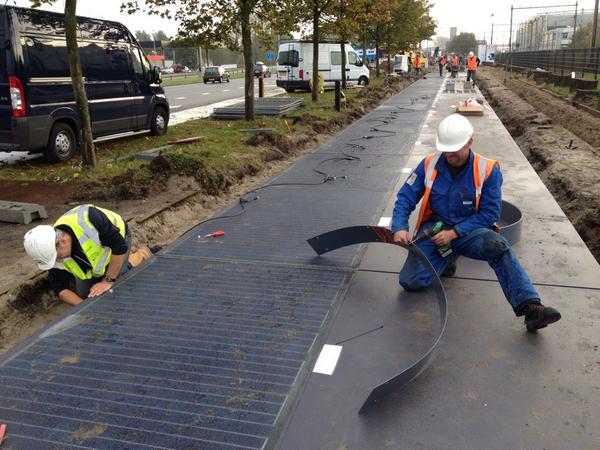 Initial power estimates for SolaRoad run about 2,700 kilowatt-hours per month, or enough energy to power three homes. This, however, is one of those throwaway factoids, since the cost of the project (at $3.75 million, or €3 Euros) precludes distributed generation. In addition, given current solar PV technology, roadway solar can never compete with rooftop solar, or even freestanding solar, because the panels can’t be tilted to match the sun’s changing elevation in the sky – a change that represents about a 30-percent loss in winter, when energy is most needed.

Still, that’s no reason to be downhearted. Technology sometimes advances almost exponentially, as witness the wireless communications sector. Solar energy might do the same. The only serious obstacle, in fact, is lack of funding, but this was attacked ingeniously by the Solar Roadways team (video at the top of the page), enlisting the help of crowdfunding platform Indiegogo and raising over $2 million for solar roads.

Julie and Scott Brusaw, the US-based couple raising money for a solar road project, point out thatif every U.S. highway incorporated solar technology the country would generate three times as much electricity as it currently consumes.

SolaRoad debuted on November 12 near Amsterdam. Hope you brought your bike!