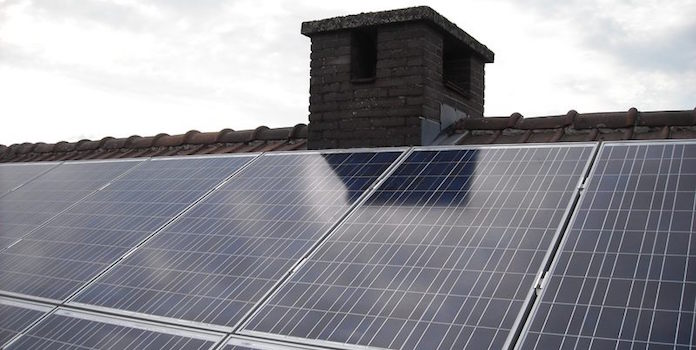 If a modest approach to ‘Going Solar’ appeals to you, we’ll show you how it is possible with discreet solar panels.

Do those big blue rectangles up on the roof make you squirm a little bit? You know they are for the best, they help the environment and save the homeowner money, but you just can’t wrap your head around how they’d look on your roof. If you believe in simplicity and modesty, then discreet solar panels are right up your alley.

The solar industry has come a long way from the bright blue and silver solar installations of yesteryear. Solar panels are sleeker and less noticeable now more than ever. In fact, discreet solar panels are becoming the status quo.

Now that the industry has matured, there are numerous ways to make your solar panels discreet. They range from simple and cheap tactics your installer can take for your conventional rooftop solar installation, to a full-out ultra-sleek option like Tesla’s new solar roof tiles.

How discreet you want your solar panels to be is a matter of personal taste and, well, money. Read on to find the solution that fits your needs. 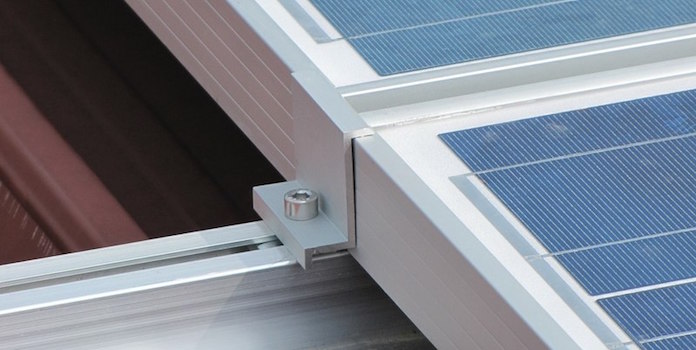 Most solar installations we see are fairly simple: installers attach the solar panels directly on top of the roof with some sort of attachment hardware (known in the industry as racking) which can include long aluminum rails, aluminum flashings, and aluminum L-feet.

As we all know, aluminum is quite shiny. Coupled with the ocean of blue that a group of solar panels make and we’ve got a recipe for visual awkwardness. We’ve all seen beautiful houses with a blue and silver solar roof installation sticking out like a sore thumb. It’s no wonder some people are turned off to the idea of solar!

Thankfully, today’s solar installers have become a little more cognizant of the aesthetics of the solar panels. Now you have several options to lessen their visual impact on your roof.

Of course, the blue solar panels we all know are still available, but now there are black solar panels as well, like Canadian Solar’s All-Black panels. These black panels are much less noticeable than the bright blue and silver solar panels of yesteryear and seem to blend with your roof far better.

One very common option is the standard blue solar panels, but with their aluminum frames painted black (pre-painted by the manufacturer). To make the installation even less noticeable, installers can also use black mounting hardware (or at least spray paint the visible portions of the aluminum hardware black) so the entire installation blends into the roof.

Some hardware manufacturers, like Ecofasten Solar with their Rock-it System, even include a sleek black skirt along the front of the solar installation to make everything look a little neater.

If aesthetics is important to you, but still play a backseat to cost and financial savings, installing a conventional solar installation with the tactics above is definitely your best bet. You save as much money as possible and your house still looks fairly normal.

Be sure to ask your installer to install black-framed solar panels and to paint all visible mounting hardware black as well. They can even paint the conduit (the metal pipe that houses the wires that connect the solar panel to the inverter on the side of your house) to match your roof shingles or tiles, making it virtually indistinguishable from the street.

But even with all these tricks and black panels, the fact remains that the solar panels still sit 4 to 5 inches off your roof. No amount of painting or tinkering with the color of solar panels will ever change this. If these remedies aren’t good enough for you, read on for even more discreet solar panel options. 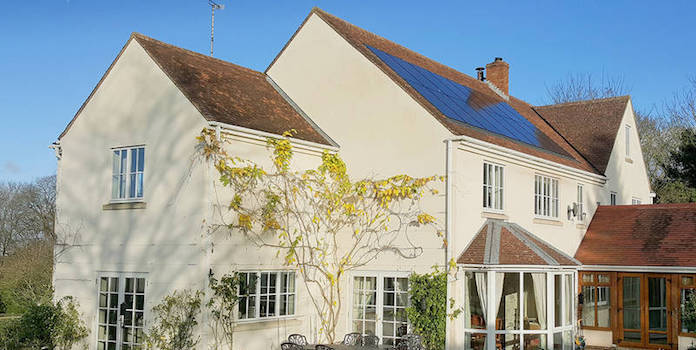 The main draw of in-roof solar panels is that they sit directly on the roof, providing a very discrete, flush appearance. The solar panels look like they are a part of the roof, instead of on the roof. They look very similar to a dark rectangular skylight.

This mounting style is rare in the United States, though it does exist in the UK. One English company, Viridian Solar, manufactures in-roof solar panels and mounting hardware.

If you are in the US, you’d be hard pressed to find a manufacturer for this set-up, let alone an installer in your area with experience. Until this method becomes more popular, we suggest you wait and look at your other options. And hey, our options on this side of the Atlantic aren’t too bad! Read more below to see what we mean. 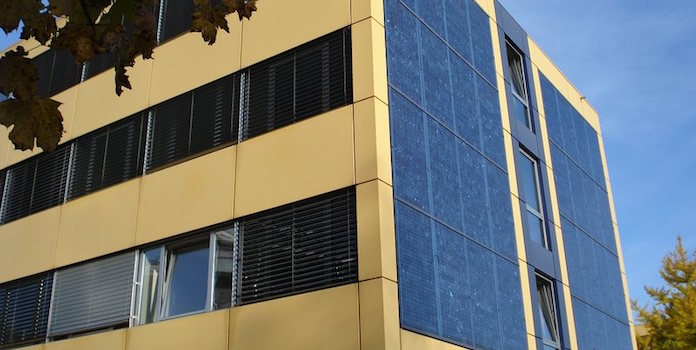 If you’re looking for the ultra in sleek, discrete appearance, take a look at building integrated photovoltaics (BIPV for short). Installers have been installing BIPV for years on commercial buildings. With Tesla’s solar tiles, it’s beginning to catch on in the residential market as well.

Many companies make BIPV for homes, including World Technology Corporation’s Sunslates, which look like little solar tiles and can be used with a variety of roofing types, including slate shingles, wood shake, and composition shingles. Obviously, you’d need a lot of solar shingles to produce a good amount of electricity. At 24 watts for each solar shingle, a homeowner would need 234 Sunslates to make an average sized 5.6 kilowatt installation.

GE, Sharp, and SunPower have also made BIPV, but there’s still one problem with all of them: they still look like solar panels. They’re still blue and you can see lines running through the middle of them. Yes, they are integrated into the shingles, but you can still tell they are solar panels.

Tesla’s solar tiles are BIPV panels that work just like any other BIPV panel. They form part of the roof and are integrated into the shingles or tiles. The real difference – and why these tiles are such a game changer – is that they don’t look like solar panels. Instead, they look like normal roof tiles.

How did they do it? The shingles are covered in clear glass which has patterns and color embedded on the top. Sunlight can still reach the solar panels, but a bypasser on the street would never know you have solar panels on your roof.

Tesla’s solar tiles aren’t yet available, but when they are, it will open up a whole new group of potential solar adopters–those who wrote off solar originally because of the aesthetics.

Back in November 2016, Elon Musk noted that the cost to install these solar shingles will be comparable to installing a new roof on your home – an incredible deal. If this turns out to be true, you won’t be able to get any better than Tesla’s solar tiles. 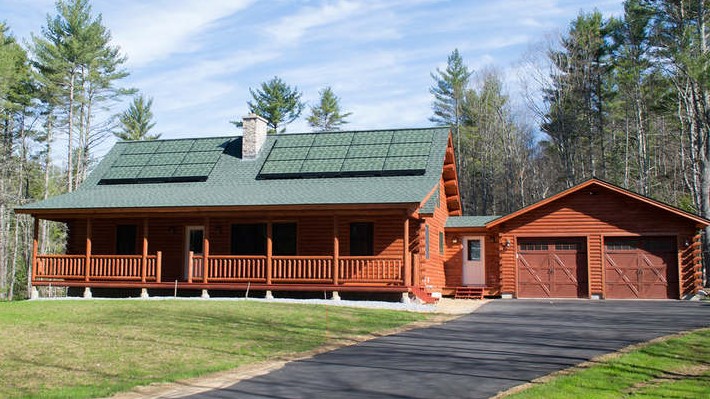 SolarSkin panels are a proprietary solar panel manufactured by Sistine Solar. They see the same aesthetic issue as Tesla, but take a very different approach. Instead of building very small integrated solar panels, Sistine Solar manufactures conventional large solar panels that come with a ‘skin’ over the front face of the panels designed to look like your roof. It’s sort of like camouflage, allowing your panels to blend into the background (though the company calls it ‘designer’). They have patterns that mimic composition shingle, slate, clay tile, and a few others in a variety of colors.

Sistine Solar is an all-inclusive experience. They design and install the solar installation themselves and have financing options as well. As a small company with offices in Boston and New York, they either only install in a limited area of the northeast or work with local installers in other cities.

With their solar panels producing 240 watts (about 20 watts lower than panels used in most residential solar installations, like Hanwha’s Q Cell series), and what is likely to be a higher installation cost than the national installers like SolarCity and Sunrun, you’ll certainly be paying for the more discreet look of the solar panels. But hey, isn’t that what this article is all about? You wouldn’t be reading this if that wasn’t a priority for you!

How important is the aesthetics of your solar installation? Is it a make-it-or-break-it decision? Would you be willing to pay a premium for more discreet solar panels? Let us know what you think in the comments below!