Renewable energy naysayers often raise the objection that renewables – like big solar projects in the deserts and gigantic wind farms on the prairies – just take up too much space and so we shouldn’t have them.

Instead, we should stick to their preferred default for our energy supply – fossil fuels.

In fact, renewable energy takes up less space than even the golf courses that fossil fuel executives love to be pampered on while raking in their billions from carbon combustion.

In a study by the Massachusetts Institute of Technology (MIT),  Future of Solar Energy the authors estimated how much land it would take to power 100% of the US entirely with big solar projects.

To supply 100% of the entire nation’s electricity needs in 2050 with solar, it would take 12,741 square miles. That sounds like a lot! But if the solar were concentrated in the sunniest part of the US where it would make the most sense and be the most efficient – like the deserts of the southwest – then the land use drops to just 4,633 square miles.

Compared to many other things we use land for in the US, including housing us in cities, growing our fruits and veggies from farmland, making all of our electricity from solar on 4,633 square miles is actually not very much land at all. Farms alone span a much greater 700,000 square miles in the US. 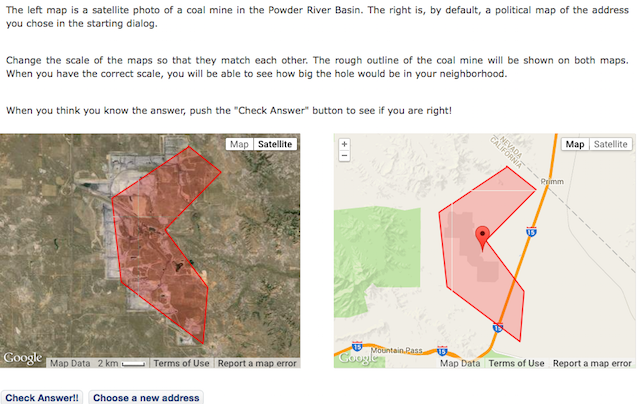 Coaldiver.org lets you compare the size of a coal mine to a solar farm. Ivanpah, one of the largest US solar farms is greyed out under the red on the right. Even that huge solar farm is dwarfed by a coal mine in the Powder River Basin. Which won’t even last 30 years – many coal mines are depleted in 12 years.

Even just golf courses; hardly something we all need — unlike homes, and fruits, and veggies, and electricity. Yet just today’s golf courses use nearly as much land as the amount we’d need to power the nation entirely from solar by 2050.

Apparently, we devote about 3,861 square miles of land just to golf courses!

But why would we want to power 100% of our future need with just solar? Most experts agree that we will wind up supplying somewhere between a quarter  and a half of our future power from solar. Splitting that difference and estimating solar needs if we went one-third solar, they come up with around 2,702 square miles for solar.

After all – we have wind in abundance too.

According to one study, powering another third of the US on wind energy could take a land area spanning on the order of 23,000 square miles of wind farms.

The MIT study concedes that that is a lot of land, but only twice what we’ve already devastated with coal mining, including mountain top removal. Unlike coal mines, wind farms are safe and healthy places for farming underneath, and are often combined with farms, as in Iowa and Texas.

So really, a wind farm only takes out of use the land needed for wind turbine pads and new access roads for workers to drive to maintain the turbines. That is only about 1% of the average wind farm.  So, 1% of 23,000 square miles is just 230 square miles for one third of our electricity in 2050 from wind power.

How about coal? Sure, harvesting sunlight takes up land space, but chopping down mountains to harvest the energy from coal actually really uses up even more, because that land is gone for good. And that’s not even counting the average coal power plant size needed to burn all that coal. That’s usually about another square mile each.

Unlike solar and wind farms that don’t use up all the available solar and wind in each solar farm or wind farm, and have to move on to mine more sunlight and breezes elsewhere, coal mines do.

Coal mines must constantly move on once they exhaust each mined area, often in just two to twelve years, and each mined region produces relatively little electricity.

So here we have to compare GWhs generated per acre of harvested land over a period of time of harvesting, whether that is harvesting sunlight or coal.

And here, solar and wind are clear winners, according to Sourcewatch.

Coal will produce 15 GWh per mined acre over 60 years, while the average solar farm will produce 18 GWhs of power per acre, over the same 60 years. Because solar doesn’t have to move on, to harvest sunlight in the space next door the way a coal mine must, because mining depletes all the potential energy from each acre of land as it scoops up its coal.

So, looked at energy generation over time, the land footprint of coal is at least 20% bigger than that of solar.

And that is with solar at its current efficiency. And we know that solar is getting more efficient over time. The more efficient solar becomes, the less space it needs to generate each kilowatt. So a future calculation will be even more favorable to sunshine.