The Atacama project, named for the arid high Chilean desert where it’s being built, has a total capacity of 210MW and will be offsetting 864 thousand tons of CO2 emissions annually. That’s equivalent to taking approximately 184 thousand average gasoline-powered cars off the roads.

Atacama 1 is really two power plants whose technologies are intended to complement each other and provide consistent clean solar energy to up to 400 thousand homes, 24 hours a day. By using both concentrated solar power and photovoltaic technology, it’s designed to get the most out of the area’s incredible geography.

No place on earth gets more solar radiation: Chile’s Atacama desert is so high and dry that its average annual solar potential is 3300W per square meter. It’s sunny there for an average of 6.5 hours a day over the course of the entire year, which makes it ideal for collecting clean solar energy.

Construction began in early 2014 on the massive 110MW-capacity concentrated solar power plant (CSP) portion of Atacama 1. It’s a stunning setup, where concentric circles of shining heliostats – 10,600 in all – pivot along two axes to track the sun across the sky and focus its rays onto tall central towers 250 meters above the desert floor like a magnifying glass focused on an anthill. 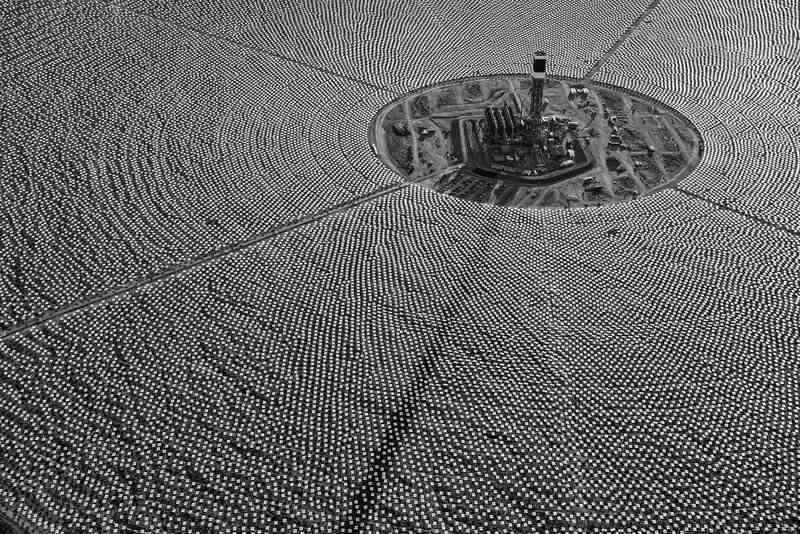 Inside the towers, reservoirs of molten salts reach temperatures of up to 565C before transferring that heat to circulating water via a heat-exchange system. When that water is heated enough to become steam, it spins turbines which produce the plant’s electricity. The makeup of the salts in the Atacama 1 system are such that they’re able to retain their heat for an impressive 17.5 hours. That chemical thermal storage system means that the reservoirs stay hot enough to steam water to run the turbines overnight, long after the sun is gone. It’s the same technology that’s being used by the Ivanpah CSP in the Mojave desert and in Morocco’s recently-built Noor CSP.

The second half of the Atacama 1 plant is a solar photovoltaic plant with 392 thousand solar panels catching the sun’s light and transforming it into electricity. It’s the largest of its kind in the country, with a total capacity of 100MW coming from a solar field 1000 hectares (nearly 4 square miles) in size.

The plant is still under construction, but developer Abengoa expects that it will be completely operational by early 2017. The construction of the concentrated solar power half is a larger undertaking than the photovoltaic panels, so the go-live date of that half of the plant is lagging behind the photovoltaic half by about a year.

Besides providing the area with reliable solar power, it’s also producing both short- and long-term local jobs. Abengoa estimates that the construction and ongoing maintenance operations of the plant are creating 2000 direct jobs, with even more indirect jobs tied to the plant via suppliers and the boost in the local economy that comes with having a new power plant in town.