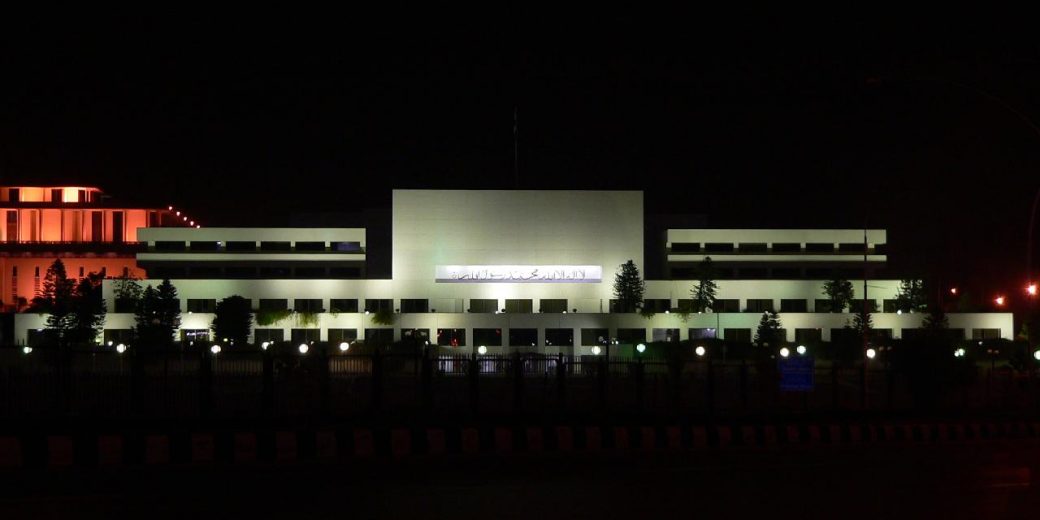 Pakistan’s Parliament House just became the first in the world to run on 100% solar power.

The Parliament of Pakistan, officially called the Majlis-e-Shoora, meets in the Parliament House in the nation’s capital of Islamabad. The building, which houses both their Senate and National Assembly, has moved off the local power grid thanks to the solar panels that now supply it with reliable clean energy.

They aren’t the first legislative body to consider solar power: Israel’s Knesset has been partially solar powered for over a year. But Pakistan is the first to take it all the way and transition its Parliament House to 100% renewable solar energy.

Pakistan’s National Assembly held their first official meeting in the newly solar-powered facility on February 12th, 2016. At that meeting, Speaker Ayaz Sadiq announced that the solar panels connected to the building were generating a total of 80 megawatts (MW) of electricity, which is a comfortable margin above the the 62 MW needed by the National Assembly on a usual day. The rest of the power, 18 MW, is being contributed back into the national grid via the local electrical utility, Islamabad Electric Supply Company.

The parliamentary solar project went forward thanks to funding from the Chinese government to the tune of $52 million USD. The generous gesture on the part of Chinese president Xi Jinping was officially intended to highlight the friendship between the two nations, but there’s more to the deal than international goodwill. China has strategically supported and financed several solar projects in neighboring Pakistan, because China needs power too.

Pakistan’s current power grid is notoriously unreliable, with many areas of the country experiencing power outages or rolling blackouts on a regular basis. Unreliable access to electricity stifles innovation and holds back Pakistan’s economic growth, to say nothing of frustrating the nation’s citizens. Pakistan’s Prime Minister, Nawaz Sharif, committed to making energy reliability a government priority, and ending the country’s power outages by 2018. That goal is only realistically achievable with outside investment in Pakistan’s energy sector, and China has been quick to throw heavy support behind large Pakistani energy projects.

Solar power is a good solution to Pakistan’s energy problems, considering that Pakistan’s average annual solar insolation is among the highest in the world. Setting up giant solar farms there would certainly stabilize the country’s electrical grid, but it would also allow it to produce an excess of energy which is could then sell to interested parties – like China.

China’s energy needs are growing, and a partnership with Pakistan could bring in much-needed power. The Chinese government and private Chinese investors are funding billions of dollars of energy projects in Pakistan, including the $130 million Quaid-e-Azam Solar Power Park, with an expected output of 1000 MW. When that power park goes online in 2017, it will be the world’s largest solar farm, taking over the title from India’s 600MW Charanka Solar Park. China’s enthusiastic investments in Pakistan’s energy sector are a part of the China-Pakistan Economic Corridor, a multibillion dollar strategic economic partnership between the two neighboring nations.
Via independent.co.uk