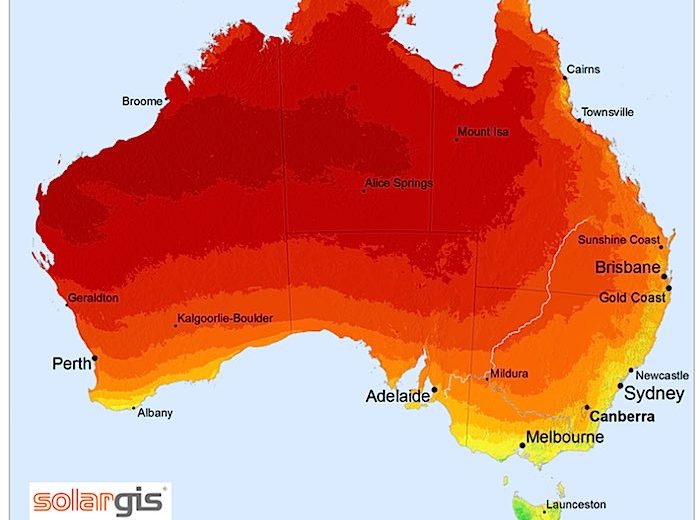 Australia is sited within the “Roaring Fourties” the near constant high winds that whip around the ocean down under near the south pole, circling Antarctica. These predictable winds create the potential for a 40% capacity factor for wind in that path – most of it wasted (from an energy capture point of view – over empty oceans. Some of the steadiest and highest winds on the globe usually cross continental Australia, as you can see in real time, the current winds circling around Antarctica in the Southern hemisphere.

So its no surprise that Australia’s wind farms produced over 30% of the country’s clean energy and 4.2 per cent of Australia’s overall electricity needs.

But that is about to change as its other clean energy powerhouse, solar, has made its own huge advances. By the end of 2014, 4 GW of solar was installed.

Unlike wind power, which has to be built at utility-scale, nearly all of Australia’s solar is actually spread out among millions of homeowners – on millions of Australian roofs.

Most of Australia ‘s 4 GW of solar is on rooftops.

Australian homeowners have installed the world’s most solar power per capita in the world. But Australian utilities have been slow to follow suit and tap into the same tremendous energy resource as its homeowners. Utility-scale solar has also recently made some gains – as it should; on one of the sunniest continents in the world!

However, the utilities are still predominantly coal-fired, and coal mining is a key industry in the country, making this solar record even more interesting: it would be as if a US coal-fired state like Kentucky led the US in solar rooftops.

Australia’s conservative ruling party has waged a war on wind – and likely soon on utility-scale solar as well, but these solar records are unlikely to be eclipsed, because unlike Australian utilities, Australian homeowners are not going to put coal plants in their backyards anytime soon. So this record amount of solar is being deployed largely by Australian homeowners and businesses.

Climate-friendly legislation under the previous government fired up these solar gains.

Australia’s political leadership has veered pretty wildly from climate champion under the earlier pro-renewable government to the anti-renewable crusade now being carried out under the current pro-coal administration. But the earlier strong incentives for solar rooftops under the previous government has already resulted in such a surge in solar adoption rates that installation prices have been driven down to the point that it is almost ongoing despite the slowdown as incentives were ended.

Another driver has been Australia’s fairly steep prices for grid electricity. Bills there have always been paid quarterly too, which helps homeowners understand how solar is cheaper. A quarterly bill somehow makes it easier to make the jump to yearly cost of renting electricity from the utility.

But Australia has to be the first place in the world to have even more home-based renewable energy in the form of solar rooftops than it has in the utility-scale renewable energy source of wind!