Trump vs. Clinton on Renewable Energy 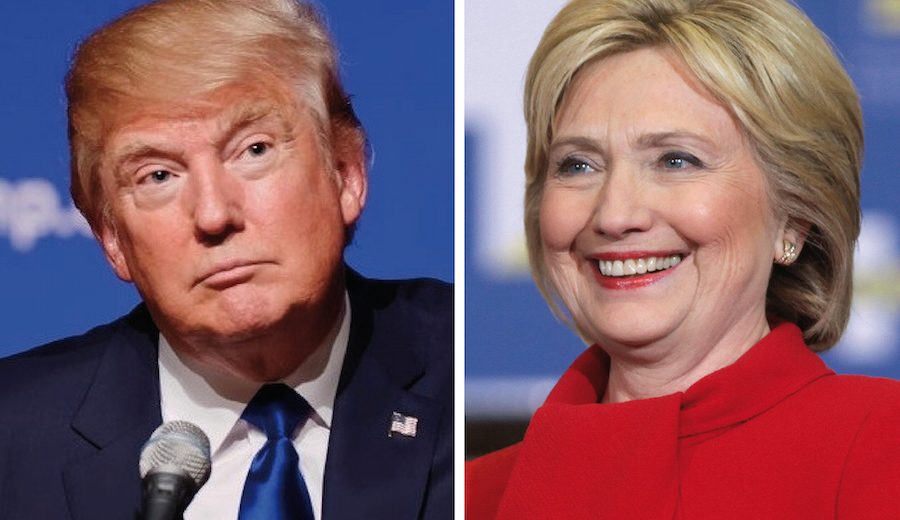 It’s not surprising that Donald Trump and Hillary Clinton don’t see eye-to-eye on dozens of issues, but the 2016 election presidential candidates have adopted completely opposite renewable energy strategies.

Perhaps the best way to approach this issue is to start with Trump’s now-infamous 2012 tweet stating that global warming was “created by and for the Chinese in order to make U.S. manufacturing non-competitive”.

When Clinton made mention of this during this year’s first presidential debate, Trump interjected (in a fashion that ruled the entire event) – “I did not, I do not say that.”

Well, which is it then? Anyone with basic research skills can investigate the issue. Trump refers to global warming as a hoax, a con, fictional, stupid, mythical and even bull***t.

Trump later tried to pass off his Chinese hoax comment as a joke, but he brought the issue to light again in a 2015 South Carolina rally: “Obama’s talking about all of this with the global warming and … a lot of it’s a hoax. It’s a hoax. I mean, it’s a money-making industry, okay? It’s a hoax, a lot of it.”

Meanwhile, Clinton continues to push for an extended renewable energy agenda that follows in the footsteps of President Barack Obama’s clean air plan while laying out a proposal to combat climate change with a focus on solar energy.

Clinton calls on the settled science of climate change (an issue that NASA also views as proven) to make her case. “You don’t have to be a scientist to accept scientific evidence,” the former Democratic senator and secretary of state tweets. “Climate change is real and we must act.”

During the first presidential campaign debate, Clinton predicted that “some country is going to be the clean energy superpower of the 21st century”– inferring this country could very well be the United States of America.

Clinton’s renewable energy plans, outlined in her Vision for Renewable Power factsheet, focuses on two main goals. First, she plans to install over 500 million solar panels across the U.S. by the end of her first term. Secondly, she will power a third of the entire nation with renewable energy – specifically boosting the use of solar energy by 700% by the end of 2020. This is equivalent to installing 140 gigawatts of rooftop solar systems on over 25 million American homes.

If these numbers sound rather ambitious, they are still lower than Europe’s plans to increase renewable energy by 50% by the year 2030.

A number of measures need to be taken to reach these goals and incentivize investment in renewable energy, such as increasing the amount of clean energy governmental grants, extending federal tax incentives for clean energy, and expanding renewable energy on public lands, federal buildings and federally-funded infrastructures.

While Hillary Clinton plans to set America on “a path towards deep decarbonization”, Donald Trump vows to revitalize the entire coal industry.

Ignoring the multiple dangers of global warming, Donald Trump plans to toss away existing regulations such as mining and drilling on federal lands while promoting the construction of oil and gas pipelines and coal export facilities. The Republican candidate also seeks to open vast amounts of federally protected public lands and waters to oil, gas and coal exploitation. Trump even proposes to somehow annul Environmental Protection Agency regulations in his first 100 days in office – regulations that were established under Obama to decrease carbon emissions from coal-fire power plants.

“Regulations that shut down hundreds of coal-fired power plants and block the construction of new ones — how stupid is that?” Trump bellowed out at an oil industry conference in North Dakota.

The Republican presidential nominee’s promises to increase fossil fuel drilling and lower environmental regulations would, according to him, bring back coal industry jobs and somehow revive the oil and gas industries which have suffered from low prices in the past couple of years.

But according to Joshua Freed, vice president for clean energy at Third Way, a centrist think tank, “Trump’s far-fetched promise to fully restore the coal industry would require substantial sacrifices from the natural gas industry and the millions it employs”.

Meanwhile, Hillary Clinton plans to further reduce the use of coal by carrying on with Obama’s Clean Power plan while funding retraining programs for displaced coal miners.

Clinton’s climate change agenda is ambitious, but research shows that renewable energy trends are growing rapidly. In fact, a new federal report released by the United States Department of Energy shows an impressive national growth of wind turbine installation, solar technology, use of LED bulbs and electric vehicles – all with a reduction of cost. For example, utility-scale solar reached a capacity of almost 14,000 megawatts in 2015 (a 43% increase from 2014). The cost of wind power has dropped 41% since 2008 while the price of LED bulbs has plummeted by 94%. As of August, there are about half a million more electric vehicles on the road.

Trump also described his “America First energy plan” at the annual Shale Insight conference in Pittsburgh, falsely accusing his rival Clinton of supporting a carbon tax. Hillary Clinton has not, in fact, endorsed this tax and has publicly stated that she would “not ban the extraction of fossil fuels until alternatives are in place”.

Trump also plans to open up more offshore acreage for conventional oil and gas drilling, going beyond the leased areas throughout the Gulf of Mexico.

The Grand Old Party (GOP), which refers to coal as a “clean” source of energy, would reverse decades of progress made in U.S. policies regarding energy, climate and the environment.

The adopted Republican Platform calls Obama’s efforts to combat climate change the result of “the triumph of extremism over common sense” and that it’s the Congress’ duty to stop it. Also on the agenda is transforming “the United States Environmental Protection Agency into an independent bipartisan commission, similar to the Nuclear Regulatory Commission.”

Four pages of the Republican platform are focused on energy and climate, in which environmental structures and legislations built over the past 40 years – some of which date back to the Environmental Protection Agency under President Richard M. Nixon – are tossed out of the window. And apparently we don’t need to worry about carbon dioxide emissions anymore, because Trump’s platform also strives to bar the Environmental Protection Agency from regulating levels of greenhouse gas emission.

Donald Trump, whose sons have become notoriously infamous for their trophy hunting photos, maintains that he firmly believes “in conserving our wonderful natural resources and beautiful natural habitats” but also promised he would “stop all payment of U.S. tax dollars to global warming programs,” which could impact the wellbeing of hundreds of animal species.

Donald Trump has also vowed to back out of the Paris climate agreement, which scientists say could doom the entire international community’s climate efforts.

The Paris agreement proposes to limit global warming to below 2°C (ideally below 1.5°C). Research shows a temperature increase beyond 2°C would bring about frequent catastrophic storms, widespread water shortages, extreme flooding, famine and inundation due to rising sea levels.

On September 20, 375 members of the National Academy of Sciences, including 30 Nobel laureates, addressed Trump’s threat in an open letter, noting that “such a decision would make it far more difficult to develop effective global strategies for mitigating and adapting to climate change. The consequences of opting out of the global community would be severe and long-lasting – for our planet’s climate and for the international credibility of the United States.”

In his opening talk during a gathering of the United Nations General Assembly, UN Secretary-General Ban Ki-Moon emphasized the importance of making the Paris Agreement a top priority this year. This means that 55 countries that are emitting 55% of global greenhouse emissions must be committed to the agreement. As of now, 60 countries (including the U.S.), which together represent 48% of global carbon dioxide emission, have signed the agreement.

The U.S. is currently the second largest global emitter of carbon dioxide, coming second after China.

One of the letter’s organizers, Dr. Kerry Emanuel, also a professor of atmospheric science at MIT, says a U.S. withdrawal would be a huge set back to dealing with the problem of global warming. Other countries could also interpret this as the United States undermining the problem of climate change.

True to the presidential candidates’ opposite views, Hillary Clinton sees the Paris Agreement as a testament to America’s commitment to building a clean energy future. The agreement will no doubt require rigid energy policies and a strong commitment to expanding renewable energy in order for the U.S. to meet its national climate commitment.

So which will it be? Will human beings continue to “live long and prosper” on planet Earth? Or will we reverse the progress we’ve made towards adopting renewable energy and living on a cleaner, healthier planet? The beloved TV show Star Trek has always offered a positive vision of the future, a vision of hope and optimism. Recently, the entire crew signed an anti-Trump letter, stating that Trump would take the country backwards – perhaps disastrously. Hopefully, Hillary’s plans can see the light of day and allow us to carry on fighting climate change and spare future generations from suffering the consequences of our failure to protect our home planet.