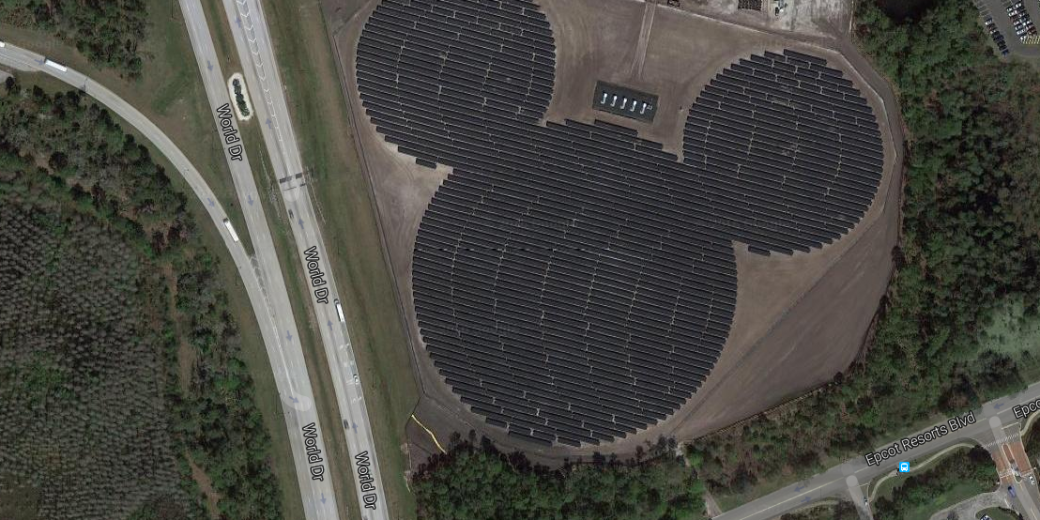 For those on their way to Orlando’s Disney World to get Belle’s autograph or revel in the Magic Kingdom, the first taste you might get of the famous park is while you still on the plane, staring down at the biggest, bluest Mickey Mouse you’ll ever see. You’d probably be surprised to know that it’s actually a solar installation!

This might come as a surprise, but Walt Disney World has come out as a major adopter of renewable energy. They just completed a large-scale solar installation to power the park and while Disney isn’t the first theme park to go solar, and soon it won’t be the largest, it has a certain panache that no one other than Disney could pull off.

In late 2015, Disney World leased 20 acres of land to Duke Energy, a large utility company operating in several states in the southeastern United States, for construction of a 5 megawatt (MW) photovoltaic solar power plant – the largest solar project in the park thus far. As always, Disney never does anything without going all the way and the 48,000 solar panels are installed in the all-too-familiar shape of a giant, renewable Mickey Mouse head.

The 15 year agreement allows Duke Energy to produce solar electricity on the site, which Disney then purchases for use in its park. Specific numbers on how the amount of electricity Disney World uses annually aren’t publicly available, but the solar system produces enough electricity to power about 1,000 homes.

The solar project was made possible through a partnership with Disney World, Duke Energy, and Reedy Creek Improvement District, a quasi-government entity closely tied to Disney World which provides services for the area where the park is located.

Mickey Mouse is Getting Greener by the Day

To create biogas, the park collects food scraps, grease, and used cooking oil from restaurants and hotels in the park and mixes them with biosolids left over from wastewater treatment. They then feed the mixture to microorganisms that then chow down and produce a mixture of methane and carbon dioxide known as biogas. The biogas is then combusted in generators to create electricity that is used in the park. As a bonus, the solids that are left over from the biogas process can then be processed further for use as fertilizer.

While Disney World is by far the largest and most high-profile amusement park to adopt alternative energy on a wide-scale, other smaller parks around the United States and the world have started installing solar as well:

Also in Florida, Legoland is currently constructing a 2 MW solar system that will be stalled over a portion of their parking lot, providing shade for visitors on hot Florida summer days as well as pumping enough electricity into the grid to power 250 homes. This isn’t the first renewable energy project at Legoland – they also use a separate solar installation to power electric cars which children can test drive.

A small, family-owned amusement park located on the coast of Delaware installed a small solar system on their roof as well. While the system is only 108 panels, totaling around 27 kW, they’ll still produce more energy in the off-season than they use. They pump this extra energy back into the grid and, because it’s from a renewable source, receive renewable energy certificates (RECs) which they can sell to a RECs broker.

Possibly the ultimate ‘green’ theme park, GreenWood Forest Park in northern Wales also recently constructed a solar installation and is the first amusement park in the United Kingdom to go 100% renewable energy. The environmentally-aware park installed over 575 solar panels in 2015, which covers about 80% of its total electricity use. The owners calculate that their return on investment is just six years and that, over the course of 25 years, the solar installation will save them about $1.3 million in electricity bills over 25 years. Greenwood Forest Park seeks to push environmental education and awareness, with paths made from locally-sourced recycled stone, a gravity-powered roller coaster, and tours of their renewable energy projects for visiting students.

Lastly, a theme park in Hyderabad, India, recently installed a 500 kW system in the park that will cover about 25% of their energy use.

Same Issues as Any Other Large Solar Installation

Amusement parks installing solar is an exciting proposition, but they aren’t immune to the challenges other large scale solar installations have experience. Photovoltaic solar requires large amounts of land and this can lead to serious issues if the project is proposed in a fragile or important ecosystem. Many large scale solar projects, particularly in the desert southwest, have been accused of encroachment on native plant and animal lands, ignoring cultural artifacts, and bulldozing rare ecosystems.

The Six Flags amusement park in New Jersey recently experienced a similar situation. In 2015, the president of the park announced plans to construct a 21 MW PV solar system on an empty, wooded area owned by the park. The project would be the largest solar installation in the state.

Sounds great right? Who could be against more renewable energy? Well, almost immediately local residents and environmental groups were up in arms, claiming that clearing the 66 acres of land to make room for the solar panels would wreak havoc on the local environment, water, and animals. They also claimed that chopping down thousands of trees is counterintuitive to green business practices, which Six Flags cites as the biggest reason for their decision, even above financial savings or positive publicity.

After over a year of court hearings and deliberation, the town’s planning board unanimously voted to allow the project to move forward, to the chagrin of many locals.

As with so many solar projects, a successful installation must take into account not only the electricity produced and carbon offset, but all the ‘side’ issues as well, however small they may seem at the time. And, if you can, it helps to throw a little fun into the project. Why not some big ears?