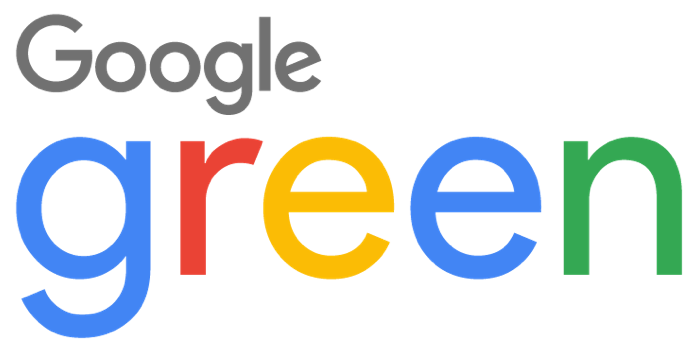 Google just announced they reached their target of 100% renewable energy.

It’s official. The fine people who brought slides into their workplace are now 100% powered by renewable energy, making them pioneers in both of these noblest pursuits.

Google can’t consume that much energy, can they?

Surprisingly, they can. Take an innocent Google search, for instance. It uses the same energy as a 60W lightbulb turned on for 17 seconds. Multiply that by a billion or so, and that’s around 5% of Google’s consumption. The power-guzzlers are their data centers. In total, Google consumes energy at a rate of 2.6GW.

Well, the average US household uses about 30kWh a day, which averages to a power demand of 1.25kW (30kWh/24 hours). So Google’s power consumption could power some 2 million US homes. That’s a lot of homes. They’d need 10 million solar panels to produce that much electricity!

Yup. They’ve followed through on their 2016 pledge to produce as much renewable energy as they consume.

How did they go about doing such a Herculean task?

Unbeknownst to much of society-at-large is Google’s aptly named energy company, Google Energy. Google Energy was created specifically to lower energy consumption of its parent company and to produce and sell renewable energy. Since its founding, they’ve been buying up shares in renewable projects or purchasing clean energy in the form of a PPA. (They pioneered corporate PPAs, by the way).

Pioneer of corporate PPAs, you say?

Google was one of the first companies to buy energy directly from private renewable energy companies. They shared their methods publicly, allowing other companies to follow in their footsteps.

So where are they getting their renewable energy from?

So far they have signed 20 agreements in total. These include 10 wind farms in the U.S, 8 in Northern Europe, and solar farms in Chile and the U.S. Most are located within the same grid as their data centers. When electricity is produced, they sell it immediately to the grid and buy it back when they need it.

Because they generate as much renewable energy as they consume, they’re 100% renewable. But, due to the intermittent power, sometimes they have to use fossil fuels from the grid, meaning that they’re not (yet) 24/7 renewable.

When will they become 24/7 renewable?

When the price of energy storage (ie batteries) goes down. Storage is still pretty expensive, but much like solar panels, the price should fall with economy-of-scale (more batteries sold equals lower prices) and technology improvements. Sam Aron, the man behind Tech and Infrastructure at Google, says that a Renewable Portfolio Standard for energy storage would be a huge boon to renewable storage efforts in the States.

So how do Google make their renewable investment decisions?

They set the bar pretty high. Before investing, the renewable infrastructure must be “additional”, which means it must be new. They’re not allowed to buy renewable energy that would mean diverting original renewables to the Google cause. Thus, they have to be promoting the renewable industry. Second, the renewables must be above their states’ RPS requirements, which further promotes new renewables.

Has Google always been this environmentally friendly?

Pretty much. Since inception, they’ve been using recycled Legos to build their server casing, using non-toxic paints and carpet materials to furnish their offices, and have been carbon neutral since 2007. These days, they are on track to making all their data centers Zero Waste to Landfill. Plus, they’ve invested millions in SolarCity.

In addition, there’s Project Sunroof  – Google’s solar matchmaking service that allows customers to see their roof’s solar potential, local installers, and potential energy savings from the comfort of their own homes – now available in 50 states.

How does Google’s renewable energy compare to other companies?

What can we expect from Google in the future?

And as their doings in tracking illegal deforestation, over-fishing and earth science would suggest, it’s pretty hard to predict where they’re going next. Most likely, Google’s landmark 100% renewable power is just the beginning.