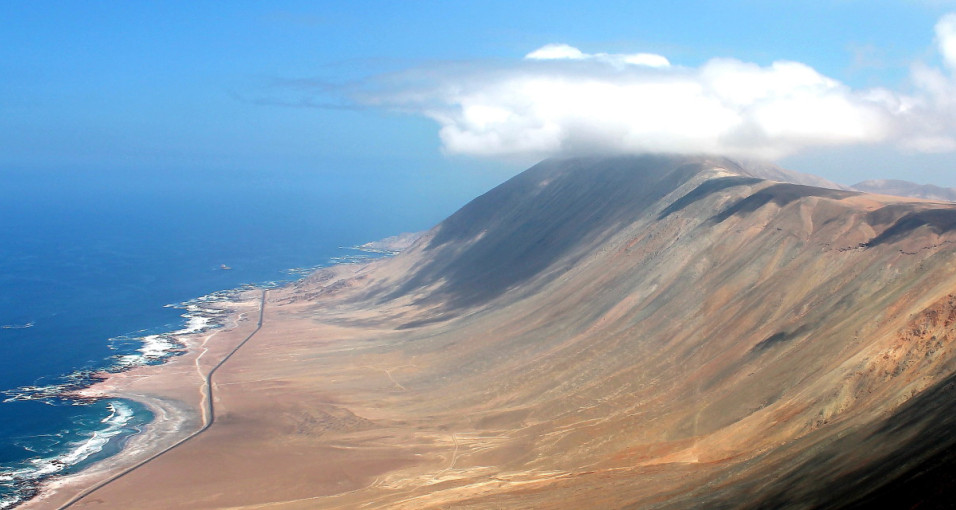 The world’s first pumped hydro storage project is being developed in Chile, using solar energy to push seawater up a cliff

Wind power has long been stored using pumped hydro. When there is too much wind that the grid doesn’t need right then; the excess wind power is used to pump water up to a reservoir. When the electricity is needed, it is allowed to rush down to turn hydropower turbines.

Valhalla Energia proposes to use the solar power generated from a 600 MW solar project to pump seawater up a nearly 2,000 foot cliff on Chile’s Pacific coast. At the top of the cliff, two large former lakes will be utilized cost-effectively to form a reservoir.

“We found these natural depressions that we believe were very ancient lakes, but obviously there is nothing there now, it is a desert, that will allow us to store water,” CEO and co-founder Juan Andres Camus told Reuters.

When the electricity is needed at night, the water will be released from the clifftop, letting gravity do the rest; driving 300 MW of turbines creating electric power continuously as it falls back into the sea. The power to pump the water up the cliff will be supplied by a 600 MW solar project.

While Valhalla Energia has not released the specifics about the amount of water that can be pumped up 2,000 feet by a 600 MW solar farm, Camus said that if the dried-up lakes were to be fully filled with seawater, the solar-pumped hydro project could supply nine days of continuous electric power.

The environmental impact study for the breakthrough project has just been approved by Chilean regulators.The 300-megawatt Espejo de Tarapaca project is 100 kilometers south of Iquique in northern Chile, in a region which is home to some of Chile’s biggest mines.

The two together: 600 MW of solar and 300 MW of solar-pumped hydro will mean dispatchable solar by night at a much lower cost than solar and batteries at utility-scale

Several circumstances make this a very unique project. Pumped hydro storage is very limited in that it requires a pair of potential or actual reservoirs; one high up and a lower one from which to pump the water.

A path between them that is as near vertical as possible must be readily available as a “waterfall” route or must be encased at added expense. And the height differential must be enough that the electricity generation is sufficient to warrant the construction costs.

For this reason there are very few pumped hydro projects in the world, and so far, all have been powered by wind. Because this one is solar, it is already the first of its kind.

Because there is not a contained lower reservoir, there is no limit on the project’s capacity. In this case, depending on the potential volume of the emptied-out lakes serving as the top reservoir at the top of the cliff, this solar-powered storage project could be much larger than most pumped hydro projects with contained reservoirs at both top and bottom.

Chile has been setting records recently in low-priced solar bids that are consistently lower than coal or gas-fired power station bids, when competing head to head. Chile imports 75% of its energy from fossil fuels from neighboring Argentina, and homegrown solar projects are proving cheaper.

Once permitted, construction on Espejo de Tarapaca is expected to begin in the second half of 2016 and to be in operation in 2020.