Solar Surges In Africa Thanks to New Investment

2015 was a big year for solar ventures in Africa, with record investment and financing deals signed for solar power and battery storage.

Off Grid Electric is currently operating in the African countries of Tanzania and Rwanda, offering solar power systems and home energy storage systems to local homes and businesses. They are currently installing solar systems in ten thousand new homes and businesses per month, and they have recently organized several substantial financing arrangements that will help to make their solar leasing program accessible to those living even at the lowest incomes.

The money is coming in large part from loans from nonprofit organizations like the David and Lucile Packard Foundation, the Calvert Coundation, and Ceniarth, who will be providing $40 million USD to finance Off Grid’s solar installation efforts in Tanzania. The US Agency for International Development (USAID) will also be supporting the project with a $5 million USD grant awarded under the Development Innovation Ventures program.

In the wake of the historic Paris Agreement for a cleaner future, Off Grid is has partnered with the Tanzanian government and the Tanzanian Investment Centre in order to bring solar power to one million Tanzanian homes within the next three years. Their model is one of micro-solar leasing, where users can pay for small amounts of electricity via a mobile phone app, and use solar power instead of kerosene for lighting, running small appliances, and charging electronics. Off Grid sells entire systems to customers that include low-energy-use LEDs and chargers, so that their dollars can go further.

In a press release announcing the deal, Xavier Helgesen, CEO and co-founder of Off Grid Electric was optimistic that this fund will allow people to easily transition from unsafe and polluting energy sources to clean solar without having to dip into their savings for the cost of the system’s installation:

“We have pioneered a business model that allows consumers with no formal credit to use their existing energy budget to finance solar. We simply redirect funds they were already paying for kerosene and batteries to a solar lease payment. This fund provides the template for any country in Africa to offer affordable solar energy to every citizen in their country.”

A growing market ready for investment

Africa is ideally situated for the collection of solar energy, with nearly 100 percent of its land mass receiving annual sunlight equivalent to greater than 2000 kWh/m2. This incredible potential is bringing energy investments to the continent, including giant projects on the scale of the recently operational Noor power plant in Morocco. 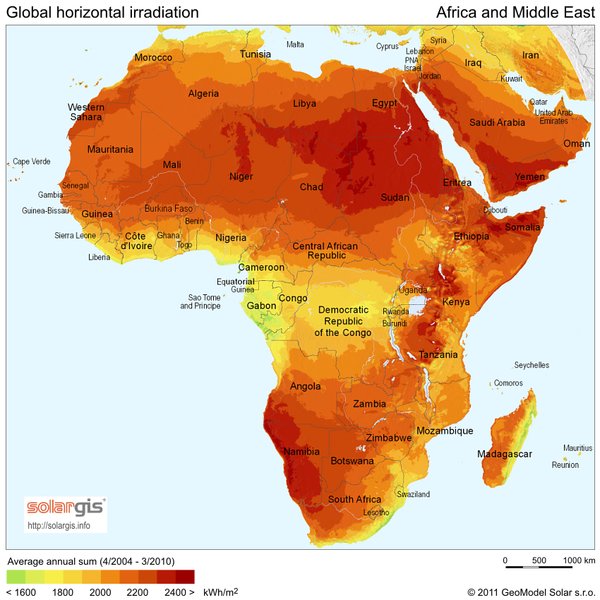 With so many in Africa living without access to reliable electricity, either because of geographical distance or unreliable infrastructure, solar energy is an attractive idea to many. Kerosene is relatively cheap, but carries a risk of fire and significant burns, not to mention the pollutants that are released by burning any fossil fuel. Kerosene lamps and heaters also put users at risk of carbon monoxide poisoning, even if used carefully. With solar power and battery storage available as a more reliable alternative, it’s clear that many people will make the switch, as long as it’s an affordable option.