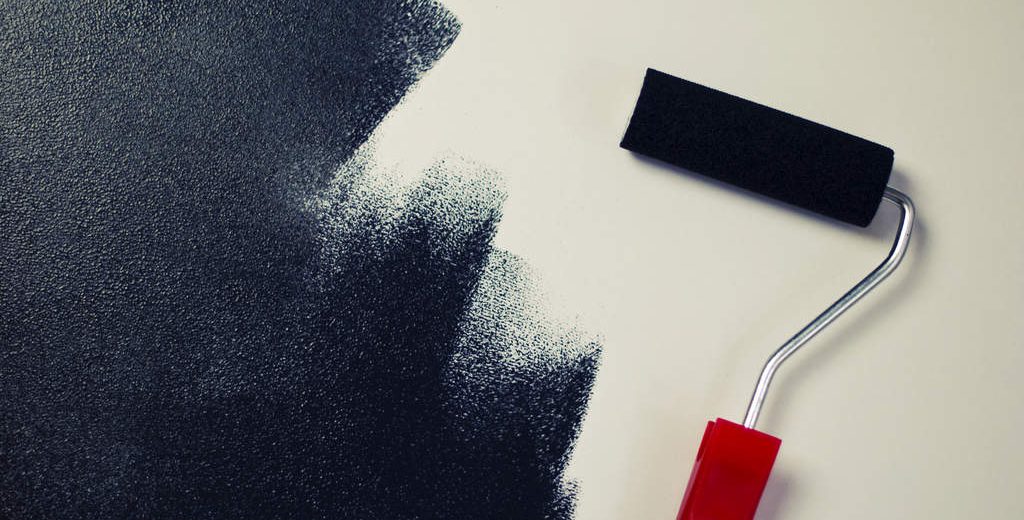 This is the idea behind photovoltaic paint, a radical new application for solar cells that is easy to apply, can be installed almost anywhere, and is cost-effective.

Sounds like something in the distant future, right? Not quite. Numerous universities and research groups have been working on solar paint over the last 5 years, one even going as far as crowdsourcing for commercial production.

Many of us are wondering what the heck is going on with solar paint right now, and why it’s not yet available on the market.

What is Solar Paint?

Solar paint, also known as paint-on solar or paintable solar, works the same as any other photovoltaic cell by collecting the energy from the sunlight and converting it to electricity. The basic idea is that billions of tiny pieces of light-sensitive material are suspended in a flexible liquid, like an ink or paint, which can be sprayed on to various shapes and sizes.

Traditional solar cells use wafers made of light-sensitive silicon, an abundant element found all over the earth. Unfortunately, refining raw silicon to the pure silicon that solar panels require is expensive, labor intensive, and uses and produces numerous hazardous chemicals.

In the end, though, this process is worth it, because silicon solar panels are fairly efficient. The average residential solar panel can convert about 18% of all the sunlight that hits a panel into usable electricity. This might not seem like much, but it’s actually taken researchers quite a long time to get to that efficiency level. It took 77 years to go from the 1% efficiency of the first solar panel ever invented to the creation of a 14% efficiency panel in 1960!

Solar paint is mostly stuck in the single digits – between 3% and 11% depending on the technology used.

Once researchers find a way to increase efficiency though, solar paint is going to hit the world big time!

However, unlike silicon-based solar panels, solar paint is cheap to produce and requires fewer specialized equipment and no hazardous chemicals, so there are much fewer barriers to entry for potential solar paint manufacturers.

Why Is Solar Paint a Game Changer?

First, as mentioned it is cheaper to produce than silicon solar panels. This means that, in the future, solar will be attainable to a broader audience due to the lower cost.

Solar paint can also be applied to surfaces of almost any shape or size, and to numerous surface types including plastic, fabrics, and even car bodies.

Thirdly, it’s easier to install than traditional panels and requires little specialized knowledge. If you can work a spray gun, you could probably spray solar paint.

You’d still need an electrician to make all the final connections, but homeowners could save quite a bit on labor costs by performing the grunt-work themselves!

Numerous university and private research groups are diligently working on solar paint, finding new application methods, strategies to increase cost-effectiveness, and most importantly how to increase efficiency. Each university is experimenting with its own methods and materials to find that winning solution. Below are just some of the groups currently working with this technology:

In 2014, researchers at the University of Toronto experimented with a solar paint made of tiny dots known as colloidal quantum dots. These dots are made of semiconductor crystals and are used in solar cells as well as LEDs and computers. While others have previously used these

While others have previously used these light sensitive dots for solar, the university found a new way to apply the dots that is faster and cheaper than the traditional assembly-line system. The dots are simply sprayed, layer by layer (the thickness of one atom at a time), onto a backing. Once dry, this backing can be rolled up, transported, and applied to any surface just like wallpaper.

The fun part of the university’s research is the customer application machine they created. We mentioned that the application of the dots is cheaper than other methods. In fact, researchers built the printer using standard airbrush sprayers and a nozzle from a steel mill. Talk about creativity!

As of 2014, the solar cells were only about 8% efficient, not bad considering how early in the development process it is, but many agree that solar paint must reach 10% efficiency before it’s commercially viable. 10% isn’t nearly as efficient as silicon panels, but because

10% isn’t nearly as efficient as silicon panels, but because solar paint is much cheaper to produce even at this lower efficiency level it’s still cost-effective. In 2016, researchers at John Hopkins University are also working with colloidal quantum dots, experimenting with spraying multiple layers in a distinct way to make the application more efficient.

As of 2013, the University of Buffalo in New York is also working on solar paint, though in a different form than the previous universities. Instead of colloidal quantum dots, university researchers are experimenting with organic photovoltaics, a plastic-like substance based on chains of hydrocarbon molecules. The solar cells can be suspended in a paint-like substance and sprayed.

As with the dots, the main benefit of organic PV is that it’s cheap to produce. However, efficiency levels are much lower than silicon-based panels and below the 10% threshold.

Around the same time, researchers at the University of Texas at Austin were experimenting with yet another type of solar paint. Unlike the other universities, which use organic PV or quantum dots, researchers used a mix of metals known as CIGS – copper, iridium, gallium, selenide. They dissolved these metals into a solvent to create an ink or paint. This solar paint can then be applied to any surface, even fabrics and plastic. However, like all other solar paint, efficiency is low – hovering around 3% in 2011, the lowest efficiency of all the solar paints listed here.

For even more variety, the University of Sheffield is using perovskite, an oxide mineral first discovered in the mid-1800s in Russia. This mineral is cheaper and easier to process than silicon and can be made incredibly thin – almost 0.5% thinner than silicon!

Lastly, in 2015 an international group of researchers working in electrical engineering created a crowdsourcing campaign on Indiegogo to fund a commercial venture into solar paint. The company, known as SolarLayer, doesn’t go into what materials compose their solar cells, but they use a copper-based fiber as a conductor and the solar cells can direct the flow of current to the top of the solar cell, where there is a copper wire connected that will feed the electricity into the inverter or battery.

SolarLayer hoped to raise $100,000 to help launch a commercial product, with shipments of solar paint set for May 2017. Unfortunately, they were only able to raise $400 and little information is available on the fate of the project.

As you might have noticed, most of these findings in the previous section were published from 2011 to 2014. From 2015 to 2016, it’s been mostly quiet on the solar paint front. You might be wondering what the heck these researchers have been doing for the past 5 years – can’t they just figure it out already so we can start painting our houses, cars, jackets, and everything else?

But don’t worry! The solar industry has always been quick to change, adopting new materials, faster processes, and new financial models. Once solar paint is out of the research and development phase and if it’s everything the researchers have promised – namely cheap, easy, and efficient – the industry is sure to adopt it and run with it!