First Solar: Reviews of their Business and Products 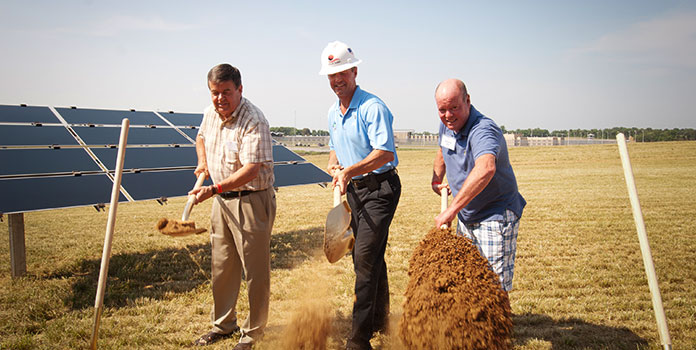 Who is First Solar, and what makes them different?

Let’s take a look at First Solar reviews of their products, what the solar industry thinks of the company, and compare them to a handful of other manufacturers.

First Solar is a solar panel manufacturer and installer focused on large, utility-scale solar power plants. They own and control each step of the manufacturing and installation process: panel production, sales, installation, monitoring, and recycling of the solar panels once they’ve met the end of their useful life.

While they don’t work in the residential sector and so their name might not be familiar to you, they’ve left a huge imprint on the solar industry. They’ve installed over 17 gigawatts of solar worldwide – enough to power almost 300,000 average sized homes and in 2016, they were the 6th biggest solar panel manufacturer in the world. However, their products are quite different than the others on that list! 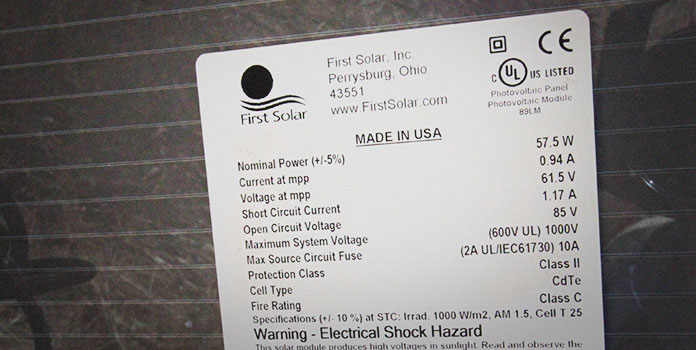 Instead of producing solar panels made from crystalline silicon (like we see on our neighbors’ roofs), First Solar is the world’s leading producer of Cadmium Telluride (CdTe) thin film panels.

Once limited in use due to their low efficiency compared to silicon panels, thanks to First Solar’s dedicated research CdTe technology has made leaps and bounds in the last few years. Incredibly, their efficiency is now on par, or even slightly above, their silicon equivalents.

Thin film panels have a host of benefits — they are cheaper to produce than their silicon equivalents and work better in hot, humid weather and low light conditions as well.

First Solar’s Series 4 panels pump out 122.5 watts of electricity and are designed for large utility-scale projects.

At about 2 feet wide and 4 feet tall, the panels are narrower and shorter than conventional panels (which is why their wattage is lower), but their efficiency — 17% — is on par with silicon panels.

As opposed to most solar panels today that are encased in an aluminum frame for rigidity, Series 4 panels are frameless, with two sheets of strong glass sandwiching the solar cells. Without a frame, these panels are quite thin and weigh in at just 26 pounds (almost half of what the average silicon panel weighs).

As we mentioned above, First Solar claims their panels perform better than silicon in both humid conditions and high temperatures, seeing a much better temperature coefficient (a measurement of how energy production decreases as temperature increases) than similar silicon panels.

First Solar is introducing its new Series 6 modules in 2018, with the first panels having rolled off the line in December 2017. At 4 feet X 6 feet, they are much closer in size to conventional silicon panels.

With this increased size, as well as even better efficiency than the Series 4 panels, they pump out quite a bit of electricity! Series 6 panels are rated between 420 and 445 watts. With the larger size, First Solar is hoping to lower installation costs.

Both the Series 6 and Series 4 modules comply with international regulations for panel strength, with both meeting wind and snow load requirements just like conventional silicon panels from any other manufacturer.

While the temperature coefficient for the Series 6 isn’t quite as good as the Series 4, its still about half the rate (and yes, lower is better!) of other silicon solar panels designed for commercial use, like Jinko Solar’s Eagle 72. 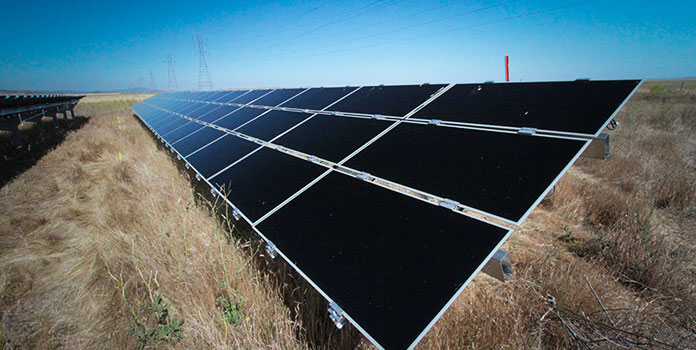 Consider this: Back in 2012, First Solar set the world record for CdTe solar panel efficiency with an efficiency of 14.4%, a full percentage higher than the previous record of 13.4%, which was also set by – you guessed it – First Solar.

While astounding at the time for thin film modules, that efficiency was grossly lower than silicon panels. The year before First Solar broke that record, American solar panel manufacturer Sunpower set a new world record of 22.4% efficiency for crystalline solar panels, the first commercially-available panel to break the 20% mark. That was a full 36% higher efficiency than First Solar’s panels!

Fast forward to 2018 though, and the story is similar but the numbers aren’t quite as far apart. First Solar Series 6 panels are rated with a max efficiency of 18% – a 25% increase in just 6 years. And, where’s the overall record for solar panel efficiency? That still goes to Sunpower, with an incredible 24.1% efficiency, though that’s just an 8% increase over their 2011 record.

As you can see, thin film solar is ripe for technological advancement and First Solar’s been pushing hard to make that a reality. Huge growth in efficiency in such a short time is certainly something to cheer them on for, and their record breaking every couple years is again testament to their unending dedication.

#3 First Solar vs Their Competition 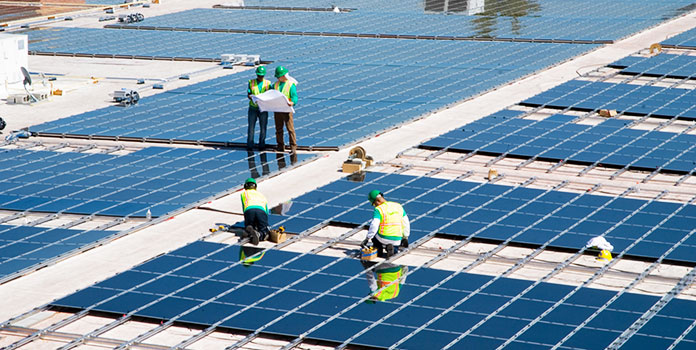 First Solar is one of the leading solar manufacturers, regardless of panel type. As we mentioned, they’re the 6th biggest panel company in the world, and the only exclusively thin-film producer on our top 10 list. To round out our understanding of the company, let’s compare a few facets of their business, including products and health, to a few other panel manufacturers.

Unlike most companies in the solar industry, First Solar enjoys good profitability and great overall health. From 2013 to 2015, they saw net income between $350 million and $550 million, though they did sustain a sharp net loss of $358 million in 2016 due to their restructuring, which we’ll discuss in a paragraph or two.

Even with this loss, First Solar really isn’t doing too bad compared to other solar companies. Consider fellow American solar panel manufacturer Sunpower, which saw a net loss of $187 million in 2015 and $471 million in 2016.

However, First Solar’s more recent history hasn’t been quite as rosy. In 2016, in response to increasing global competition, the company undertook a major overhaul. They laid off 1600 employees to streamline their factory processes and abandoned their Series 5 modules, opting instead to jump forward directly to a Series 6.

They even built a new production facility for the Series 6 panels in Ohio, which only recently started producing panels. You can see the results of this dramatic change in their annual net loss we mentioned above, brought on in large part from a huge restructuring fee.

As of early 2018, First Solar’s stock is back up after falling by half after they reported the losses above. Whether their new Series 6 line will give First Solar the long-term edge needed to exist in the solar industry, we’ll have to wait and see.

We’ve already overviewed First Solar’s incredible efficiency gains with their CdTe panels, but let’s take a look at a few other facets as well.

With First Solar’s panels sized differently than most other manufacturers, it’s difficult to give an apples-to-apples comparison of their energy production. To alleviate this, let’s focus on the wattage per square meter of a few different panels, as this gives us a more easily-comparable data point. Here we go:

Historically, the main benefit of thin film solar was their lower manufacturing costs compared to silicon panels, so First Solar was naturally at an advantage.

In 2017, though, that cost gap has narrowed, thanks to mainly Chinese manufacturers with razor-thin margins, to the point where silicon panels are actually cheaper than thin film solar. (p.12) However, as we mentioned, First Solar’s Series 6 is designed to have lower installation costs to combat rivals’ low costs.

With First Solar’s dip in profits in 2016 and a huge financial investment in their new product, we’ll have to wait and see how their profits, and by extension costs, will work out.

With solar panels a long term investment, panel warranties are an important consideration for anyone – homeowners, businesses, and utilities alike. Customers need to know that their manufacturer will back them up if a panel malfunctions 5, 10, or 20 years down the line.

You can see that Sunpower, renowned for the longest warranties in the entire solar industry, blow the other two manufacturers’ 10 year product warranties out of the water. However, when it comes to production guarantee, First Solar has them both beat, guaranteeing their Series 6 panels will produce 86% of their nameplate rating (i.e., the wattage listed on the brochure) by Year 25, much higher than both Sunpower and Jinko.

Why Does This Matter for Homeowners? 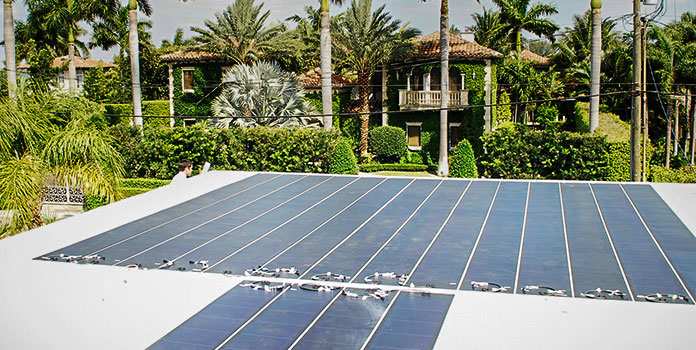 You might be wondering “Why does all this matter to me, a homeowner? First Solar doesn’t even make residential solar panels!” and you’re right, they don’t. However, that doesn’t mean they aren’t important to the future of the solar industry in general.

As we’ve driven home in this review, First Solar is one of, if not the leader in thin film solar panels. Today, silicon panels are the modus operandi of most solar installers. They’re cheap, efficient, and durable.

However, as we’ve seen above, First Solar’s CdTe panels are quickly becoming just as efficient as silicon panels, remain as cheap or cheaper, and see higher production guarantees than similar products.

Who knows what the future holds for the solar industry, and what technology advancement will take hold next. It could very well be thin film CdTe!