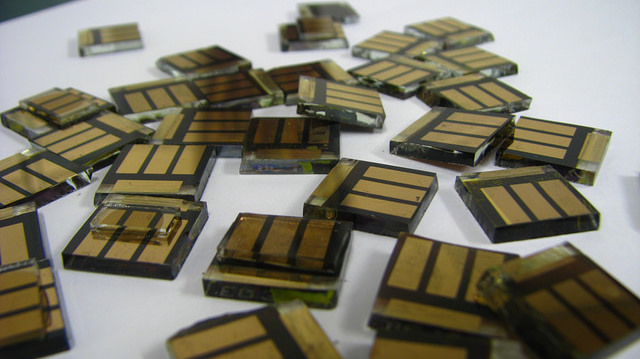 Could an organic-inorganic hybrid perovskite solar cell be the Holy Grail we’ve been looking for?

Reaching a high power conversion efficiency has always been the goal of solar energy.

Last year, the development of perovskite-silicon solar cells by the Hong Kong Polytechnic University showed great promise by reaching the world’s highest power conversion efficiency of 25.5 percent. This was accomplished by designing a transparent perovskite layer with an optimized thickness that allowed the absorption of light into the silicon part of the solar cell.

Then a few months later, a team from Eindhoven University of Technology showed that adding a few nanometers of a thin layer of aluminum oxide would protect a perovskite solar cell against humidity while increasing power efficiency by three percent.

In terms of structure, perovskites (named after Russian Mineralogist Lev Perovski) are similar to calcium titanium; recent research has looked at the possibility of using metal halide perovskites as the photo-active layer in solar cells. Results have been exciting, with energy conversion efficiencies boosting from 3 percent to over 20 percent in only four years. This high power conversion, along with a low-cost of fabrication, has prompted further research into examining the use of organic-inorganic halide perovskites for solar cells.

Assistant Professor Shangchao Lin of the FAMU College of Engineering of Florida State University also proposes that organic-inorganic hybrid perovskite solar cells could be the future of technologies that generate electricity from the conversion of light, such as in the case of solar energy.

Dr. Shangchao Lin’s paper, “Probing the Soft and Nanoductile Mechanical Nature of Single and Polycrystalline Organic–Inorganic Hybrid Perovskites for Flexible Functional Devices”, published with colleagues Jingui Yu and Mingchao Wang in the journal ACS Nano, paired with another recent study, theorize that using organometal halide perovskites could not only prove to be advantageous in terms of mechanical flexibility but also in terms of energy efficiency – that is when compared to existing inorganic materials (such as silicon) currently utilized in solar PV cells.

“We’re addressing this from a theoretical perspective,” the assistant professor is quoted as saying. “Nobody has really looked at the mechanical and thermal properties of this new material and how it could be used.”

The problem with the current technology of perovskite solar cells is their crystal structure, which makes them susceptible to stress-related fragmentation.

Using mathematical simulations at the atomistic level – specifically on CH3NH3PbI3, a two-dimensional hybrid organic–inorganic perovskite and MAPbI3, a single-crystalline – Professor Lin and his colleagues showed that MAPbI3 exhibited higher tensile strength than polycrystalline samples, while CH3NH3PbI3 exhibited enhanced nano-ductility and fracture toughness. The research team concluded that organic-inorganic hybrid perovskites are not only more compressible but can absorb more strain energy through a crystalline-to-amorphous transition, rendering them ideal for devices that need to be mechanically flexible, robust and damage-resistant, such as in the case of solar PV cells.

Dr. Shangchao Lin’s simulations showed that the organic-inorganic hybrid perovskites would absorb twice as much elastic energy from external forces, compared to silicon, before reaching mechanical failure – meaning the perovskites could potentially endure twice as much physical distress from bad weather and other external factors when used for the construction of solar cells.

One of Professor Lin’s previous papers, published in the journal Advanced Functional Materials, argues that the organic component of hybrid perovskites have very low thermal conductivity, which would boost the efficiency of thermoelectric energy conversion.

“The amazing energy conversion efficiency found in hybrid perovskites has put it at the frontier of material discovery,” Professor Lin says. “Even more exciting, hybrid perovskites-based solar cells are four times as efficient, in terms of quantum yield, than polymer-based ones. They are also as efficient as the current, mainstream silicon-based solar cells but are much more flexible and cheaper to make from a solution phase through a procedure very similar to inkjet printing.”

In order to test his theories, Professor Lin plans to dig deeper in his initial studies with the help of device engineers, experimental chemists and material scientists.

Hopefully, the future will allow us to see Professor Lin’s research come to fruition with the manufacturing and selling of his hybrid perovskite solar cells that function at a quadrupled power efficiency.

Photo credit: University of Oxford Press at Flickr under a Creative Commons license