The Lighter Side of Life with a Solar Panel Cartoon 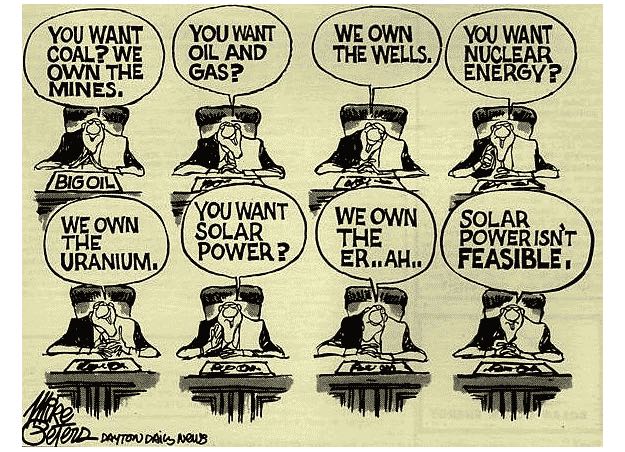 If a Picture is Worth a Thousand Words, What About a Solar Panel Cartoon?

Cartoons can be a great way to find the humor in something: news highlights, politics, or to educate (and usually, some combination of the three). A lot can be said with few words – about solar politics, finances, and safety. Take a look at a solar panel cartoon or three that we found below!

Solar vs. oil and gas, as told by cartoons

….demonstrates some of the perceived politics around solar power, and can explain why some utilities or oil and gas companies try to pass anti-solar legislation – because they don’t own the source!

No one owns the sun, and you (yep, you!) own your solar panels if you purchase them with cash or take out a loan. While you still need to connect to the utility grid, using solar is a great way for you and your home to be energy independent, and for you to own your own power.

….from The New Yorker ties in with current politics, protesting the Dakota Access Pipeline (DAPL) with a new suggestion that we sure aren’t opposed to! While not all of the oil flowing through the pipeline is intended to create electricity for utilities, U.S. residents going solar on a large scale would be a great way to start weaning ourselves off of fossil fuels.

….shines a light (no pun intended?) on how safe solar electricity is compared to other types of energy. Even though there are safeguards and procedures to prevent nuclear disasters, they still present a risk – a risk that isn’t mirrored by solar, whether it is a large utility-scale operation or the type on your rooftop. And solar is much safer than oil, which has been known to spill.

When it comes to the workplace, solar energy is definitely safer than working on an oil rig or in a coal mine, though there are still some hazards – but you can feel good about knowing the people that help create your panels are part of a growing, well-paying middle-class job economy.

Have a little laugh

….shows how you might feel after getting solar panels – not that you’ll actually build a shrine to a new god, but you’ll sure be thankful! You’ll see lower energy bills and have a smaller impact on the environment.

….makes a little joke about just how far we’ve come (for better or worse!). Even more than mentioning solar power, it shows us how technology has impacted what we do and how we navigate our world. The solar-powered GPS (not a real thing as far as we can tell, but you can get portable solar-powered phone chargers!) shows how we can use a very simple, primitive source of power – the sun – and couple it with new technology to generate electricity! We’ll call that an upgrade – same as having GPS.

….is one of our favorites, because of how simple it is. When you look at this, doesn’t it seem ridiculous to dig deep underground to extract dirty material we then have to burn in order to make electricity? A cleaner, simpler alternative is right above you if you just look up – the sun is a massive source of energy, ready for you to use! Start taking advantage of it and talk to potential installers today.

So while these may not be like the old Saturday morning cartoons, we hope they were entertaining! However, if you do want to check out a cartoon about solar, you can watch an animated Elon Musk explain how solar will become a big player in the energy market.

Have you seen any other good solar cartoons? Have any thoughts on the ones we shared? Please let us know in the comments below!