3 Reasons the Solar Powered Car is The Next Big Thing 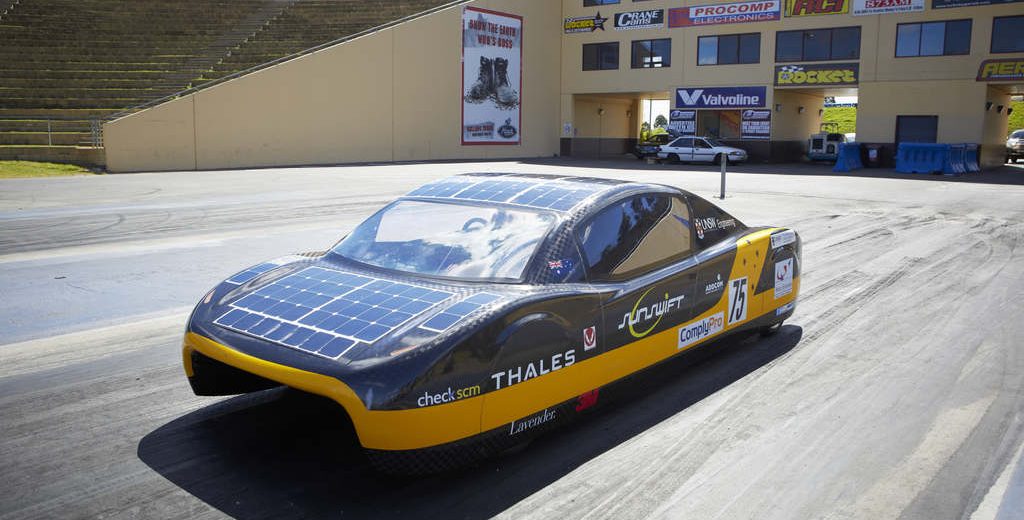 The solar powered car could be the future. Adopting a solar electric lifestyle makes sense on many levels – including boosting your cash flow and becoming independent from volatile gas prices.

You may have heard that solar energy and electric cars are a match made in heaven. With his announcement of the SolarCity and Tesla Motors merger, Elon Musk has made it clear that the solar powered car is to solar power what peanut butter is to jam.

In fact, if you’ve already covered your roof with solar panels, you may have started thinking about buying an electric car (also known a plug-in electric vehicle). And here’s why your intuitions serve you right.

Tesla Motors is known as one of many manufacturers of electric cars and their line of products are increasingly becoming more and more appealing – especially to solar energy users. Let’s say you’ve got a nice solar energy system installed in your home.

Use it when solar energy is cheaper than standard utility rates and POOF!

You’re not only saving money when you power your home but every time you charge your electrical car. It’s not just the cost of going solar that is rapidly decreasing but you can now choose to install a solar photovoltaic energy system that fulfills both your home and your electrical car’s needs.

Despite numerous incentives, however, it can be costly to install a solar energy system at home and purchase an electric car as well – and you should know what factors to take into account on top of your habitual electricity consumption.

For instance, how much electricity will your electric car use, and what is your electric car’s mileage rating? Answering both of these questions is key to determining how much you can actually save before making a mad dash over to one of North America’s top ten electric car companies.

Obviously, electric cars aren’t powered by gasoline, so how can you figure out an electric car’s mileage? The United States Environmental Protection Agency relies on a rating system that takes into account the required power in kilowatt-hour (kWh) for an electric vehicle to travel a distance of 100 miles. This value can then be converted into miles-per-gallon equivalent (MPGe).

For instance, if you decide to get a 2016 BMW electric vehicle and then buy the famous solar plane Solar Impulse I, how much money would you save each year?

Well, we’re not too sure about you saving cash by purchasing a solar plane (or an electric BMW, for that matter) but you can peak at FuelEconomy.gov to check out any electric car’s power rating.

As you can see, the 2016 BMW i3 BEV in question is rated at 27 kWh/100 miles, which means it requires 27 kWh of power to drive a distance of 100 miles. Driving an average of 210 miles a week translates into 56.7 kWh, which means you’ll need a little over 3000 kWh of extra power each year to charge up your 2016 BMW i3 BEV in the driveway (while hopefully making your neighbors green with envy).

While grid-consumers in America pay an average of 12 cents per kWh, solar energy costs around the world continue to reach new lows – such as under three cents per kWh.

Are you still intimated by the upfront cost of an electric car? Based on the  model size and battery capacity, you’re eligible to receive money from the last person you expected: the federal Internal Revenue Service (IRS).

Tax credits range from $2,500 to $7,500 per new electric vehicle purchased for use in the United States. And keep in mind that prices are likely to decrease as the production volume of electric cars increases.

Tax credits won’t be around forever, so make sure to take advantage of them soon.

2) Wave good-bye to the gas station across the street!

That’s right ­– if you’re a normal human being, then fluctuating and unpredictable gas prices can irritate you like there’s no tomorrow. So how about adding “energy security” and “improving fuel economy” to the advantages of becoming a “solar electric individual”? (Yes, we know this may sound like a tofu-eating, peace-loving, tree-hugging bearded guy but being solar electric applies to anyone who wants to save money and cares about the environment.)

Unlike your average fuel consuming, carbon dioxide emitting and environmentally detrimental car, you won’t be at the mercy of volatile gas prices and unstable politics with an electric vehicle (that’s hopefully charged with solar energy technology– let’s call that an electric solar vehicle to make things simpler).

Data from 2014 shows that 27% of fuel is imported, and this chunk represents almost three quarters of America’s total fuel consumption. How about helping America gain independence from price spikes and supply disruptions? Even hybrid electric vehicles can help – equipped with electric-drive technology, they use a lot less fuel than conventional vehicles. In fact both types of vehicles (hybrid and electric) can offer you flexible fueling: you can charge an electric vehicle anywhere that supplies power (whether from the grid or from a solar energy source) and a hybrid vehicle can also run on gasoline and diesel, or hopefully other types of fuel sources that have yet to be discovered.

If you own a MacBook or an iPod, then you know that over time, batteries lose their ability to hold charge. Similar to the engines of conventional cars, the rechargeable batteries of an electric vehicle aren’t designed to last forever. Test and simulation results from the National Renewable Energy Laboratory show that batteries have an average lifespan of 12 to 15 years and a little less in extreme climates – similar to how weather can also affect solar panels. Numerous manufacturers of plug-in vehicles also offer battery warranties that usually last for 8 years or a driven distance of 100,000 miles, whichever comes first. You can usually also sign up for warranties with a monthly fee.

So as you continue saving money on utilities with solar panels, start lowering your fuel costs with an electric car and gain independence from foul-smelling petrol!

And if for some ungodly reason you haven’t yet gone solar, acquiring an electric vehicle is still a step towards embracing a solar electric lifestyle. We’re not just talking about skipping the headaches of going to a conventional car mechanic and the vortex of wasted time spent “hanging out” and drinking stale coffee in a garage – not to mention the residual mechanical smell that sticks to your clothes after you (finally) leave. On top of saving money on fuel costs, you can also save loads of car maintenance. Think about it: you can scratch spark plugs, oil changes and transmissions from your TO-DO list and the required expenses that automatically come with. With an electric car, the only maintenance you’ll need to keep up with is tire rotation and inflation. On average, your electric vehicle could save you about one-third of the cost of maintaining a traditional car. So put that pile of extra cash towards investing in a solar energy system for your home.

3) Lower your contribution to global warming!

Our list wouldn’t be complete without going back to the obvious: the foundation of what drives the growth of green energy and what should motivate everyone to adopt a solar electric way of life. The topic of global warming, the emission of carbon dioxide and how green energy can help is repeatedly addressed at international conventions, such as last year’s United Nations Climate Talk in Paris.

Even local communities and cities are taking incentives and passing mandatory legislative green energy laws to protect themselves from the dangers of global warming and coastal flooding.

Keep in mind that each type of vehicle has a different life cycle emission, depending on what electricity source was used for battery charging, and which relies on the availability of low-polluting energy sources in a particular geographical location.

With today’s mainstream solar companies offering hassle-free installations, system monitoring and performance guarantees, going solar is easy as saying 1-2-3. Factor in the low-maintenance costs and low solar charging costs of electric vehicles and it becomes a no-brainer to adopt solar energy and an electric car into your home and lifestyle.

If you’ve already gone solar, then it’s time to boost your savings even more and claim your tax credits by purchasing an electric vehicle.

Ideally, not only should everyone switch to driving a solar electric car, but hopefully the adoption of a mainstream vehicle that is 100% powered by solar energy will soon become a reality. But that remains a topic best left for another time.