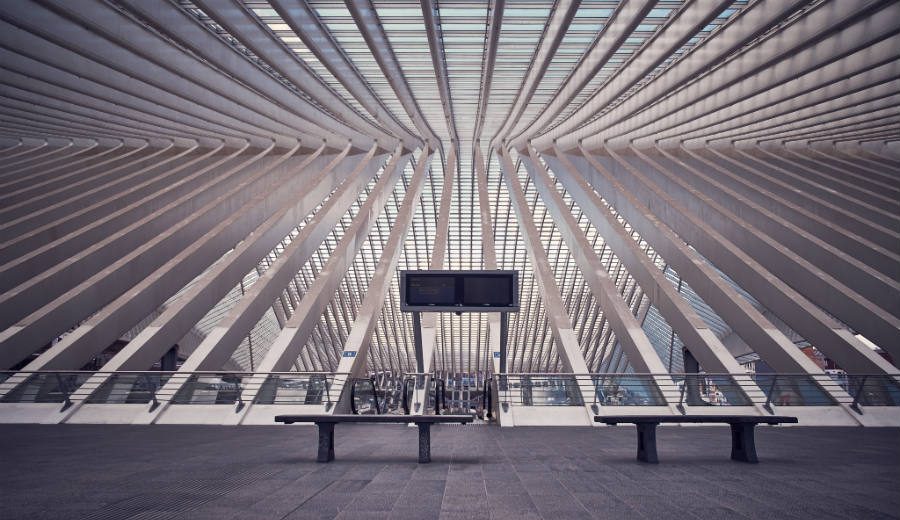 It’s easy to forget that electric trains are a type of EV, and possible to power with clean energy like solar.

About ten cities in the US have electric train systems. These include BART in California, and the NY Subway system (most of the NYC Subway is actually above ground once it leaves Manhattan).

Electric rail is super sustainable already, but hardly a fast-evolving technology. Beginning as a visionary concept based on Jules Verne’s science fiction idea of a future in 1911, BART ultimately only began to be developed in 1946.

The idea is to put the solar panels on canopies above, rather than on the trains themselves, and the train would travel under the canopies. 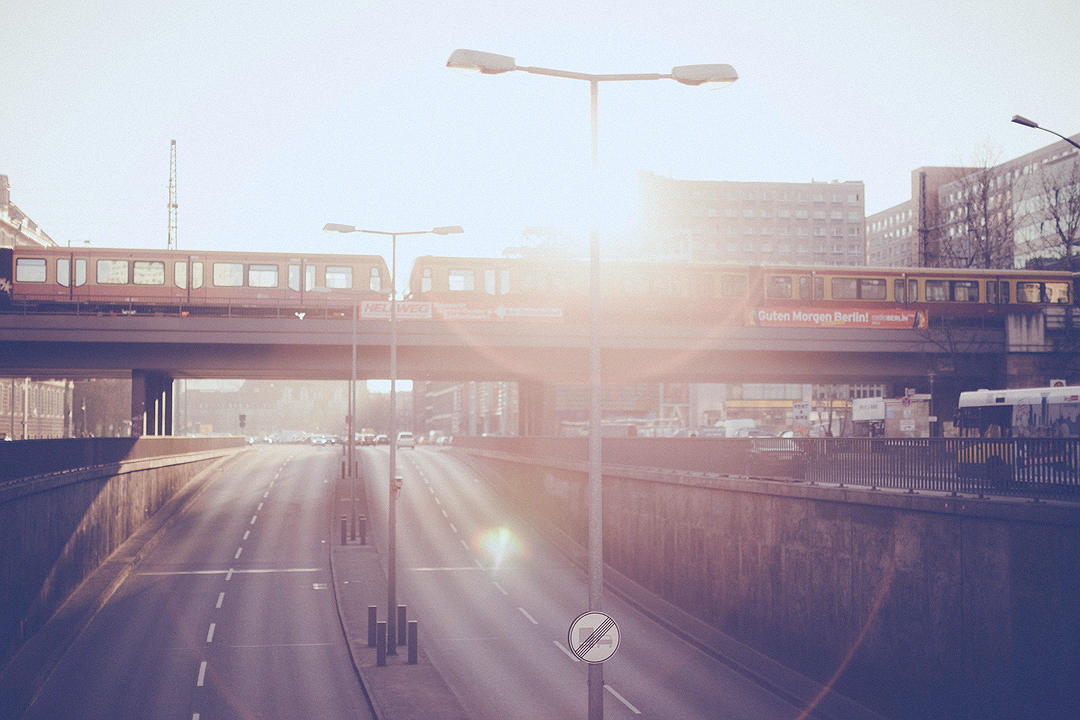 A solar canopy could supply about a megawatt per mile

Solar power could entirely replace fossil fuels for trains, and would catapult the already high-efficiency of trains. EVs now on the roads like Tesla’s Model S, the Chevy Volt, or the Nissan Leaf are 2.5 to 3 times more efficient than an equivalent horsepower in an ICE (Internal Combustion Engine) powered car.

Electric trains ramp up efficiency to an amazing level, at 2.5 times more efficient than an EV

With 1 megawatt (million watts) of solar canopy installed along each mile of train tracks, electric trains would provide 2 million passenger-miles of train travel.

And a 3 megawatt-long solar canopy, which is perfectly doable, just wider, could supply 6 million passenger-miles of travel.

The potential of solar canopies to cut fossil energy use is enormous. The total US train system takes a staggering 45 GW of electricity. Depending on which state they are going through, a lot of dirty energy powers today’s trains.

Electric trains are an astoundingly efficient way to move large numbers of people, especially along much-travelled urban corridors like NY to Washington.

He could put one 300 watts solar panel on the roof of his small EV. But that would only power about 4.5 miles per day of driving. But put the same 300 watts panel on a solar canopy above a train track to power the train and it would supply 4,000 passenger-miles a year.

There is enough space in the existing rail infrastructure — on train stations and near train tracks — for enough solar panels to provide all of the electric train’s power demand. 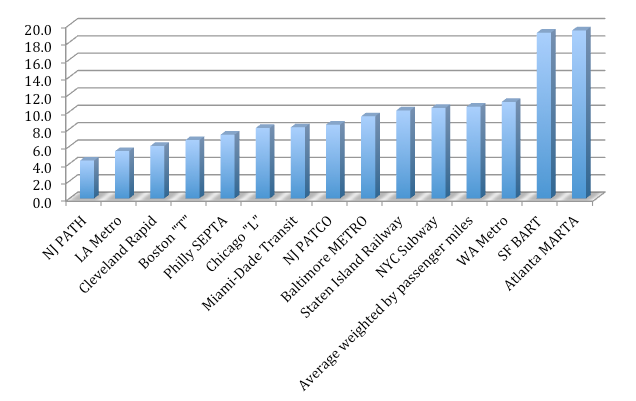 Hunt has calculated what is feasible for the existing BART system in the Bay Area.

In the case of BART the electric propulsion is supplied by a 1,000-volt DC connection in the third rail, and each rail car has a 150 HP motor above each axle, for four per car, for a total of 600 HP in each rail car.

He gave another example, of a smaller system in a region with a far lower insolation: in Illinois. Chicago’s electric train system, and one of the most used in the US, would be able to be 100% solar-powered, by his calculations.

The Metra Electric line, serving Chicago, is 31 miles long. Even if only 18 of its 31 miles were covered in solar, at 1 megawatt per mile, these panels could supply all of the Metra Electric’s power needs each year.

Resistance to High Speed Rail in the US

The Obama administration offered funding from the Recovery Act, as part of getting the economy moving again after the financial collapse of 2008 to many states to put in High Speed Rail (HSR), but most Republican governors turned it down.

California is one bright spot, with its plan for HSR linking the Bay Area to Southern California, entirely powered by electricity, at speeds up to 220 miles per hour, making the trip in 2 hours and 40 minutes. But even this is more than ten years away from completion.

Because these kinds of rail systems are so massive and take so much investment, there are fewer of them as the US has gradually devolved into a nation that can barely keep the infrastructure it already built-in operation, let alone agree to build massive new projects.

So it may seem like this idea may have missed its moment, at least in the US, from the point of view of the national psyche. The end of the 19th Century, with the massive NYC district steam heating, and the early 20th century with the Hoover Dam, were the heydays of massive visionary investment in the Public Good, that has dwindled since.

The original railroad system was developed to enable the coal industry to get its fuel across country to where it was needed to be burned every day. Hunt is not relying on just the US, however, with its long history of dirty energy support.

High speed trains, travelling at 155 miles per hour, linking major cities have actually been commonplace in many sustainability-conscious EU countries for some time, and Japan built the first so-called “bullet train” in the 1960s. 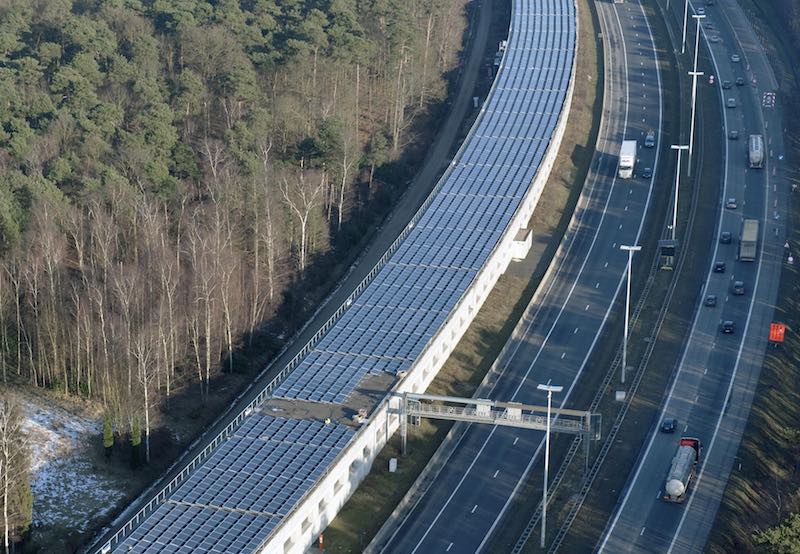 The solar canopy over the HSR built by the Belgian railway infrastructure manager Infrabel is pictured above.

Even for non-high speed trains, the global market is enormous, and growing – from the long-term climate safety point of view – right where it needs to be, in China and India.

India has about 40,000 miles of track and that’s growing.

Currently China has almost 70,000 miles of track, by far the most ambitious rail travel in the world.

China has more than doubled its electric train system within just the last decade.

With its new climate commitment and its series of Five Year Plans that lay out future goals and then put together the methods to making them happen, this expansion will keep going.

These are where Hunt sees the potential of a massive deployment of solar-powered electric train systems.