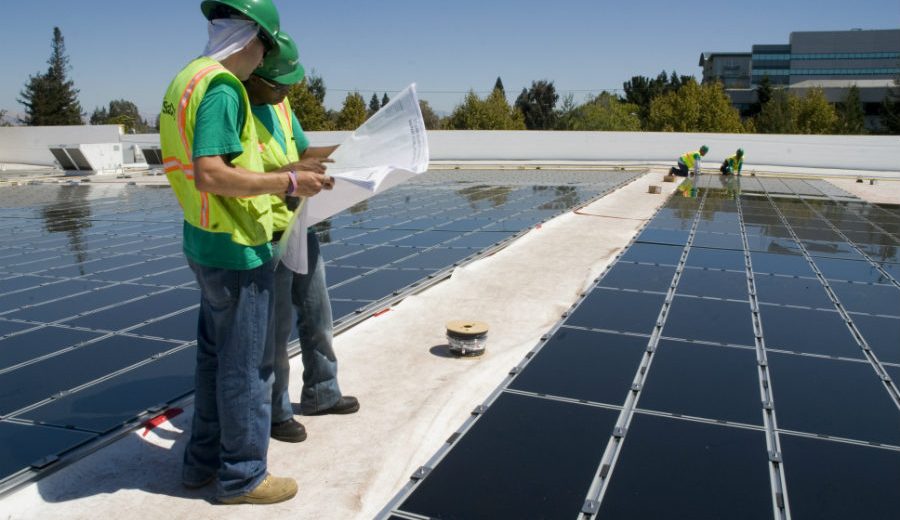 Here’s a list of solar energy terms to help you navigate through technical texts. If we left something out, let us know!

Array – a set of photovoltaic panels. A home solar electric system might include several arrays on different parts of the roof.

Azimuth – It is a horizontal angle measured clockwise from any fixed reference plane or easily established base direction line an important measurement (usually in degrees) used to optimize the placement of photovoltaic panels. The azimuth angle is the compass direction from which the sunlight is coming, and therefore where solar panels should optimally face for the most solar power production. A positive azimuth angle generally indicates the sun is east of south, and a negative azimuth angle generally indicates the sun is west of south.

Balance of System (BOS) – The balance of system (BOS) encompasses all components of a photovoltaic system other than the photovoltaic panels. This includes wiring, switches, a mounting system, one or many solar inverters, a battery bank and battery charger. It is basically all the parts of a solar electric system excluding the solar panels and the inverter. Balance of system usually includes items like racking, wires, conduit, and safety shut-offs. The balance of system might account for 15% of the total cost of a solar electric system.

Base load – the amount of electric power a utility must supply constantly to meet the demand for energy. It is the minimum level of demand on an electrical supply system over 24 hours. Base load power sources are those plants which can generate dependable power to consistently meet demand.

Battery – a battery back-up for a solar electric system stores the extra power the solar system makes. A home can use that power when the solar system isn’t producing enough energy, at night, or in a power outage.

BIPV panel – Building-integrated photovoltaics (BIPV) are photovoltaic materials that are used to replace conventional building materials in parts of the building envelope such as the roof, skylights, or facades. It is also a type of solar electric panel that uses silicon as a semiconductor and acts like a part of your roof. They’re also known as solar roof shingles. BIPV can be done on new or existing roofs.

Cell – the smallest part of a solar panel that converts light into solar electricity.

Direct Current (DC) – a type of low voltage electrical current. DC electricity is produced by solar cells and must be converted into AC before it’s usable in a house.

Grant – A cash distribution paid to homeowners. Grants often come from government agencies or non-profit organizations, as opposed to rebates, which mostly come from utility companies.

Grid – a system of high-tension cables in a region that distributes electricity to homes, businesses, and other buildings.

Grid-tied/Grid connected – a solar system that is connected to the power grid and uses the grid as a backup source of power.

Ground mount – a solar electrical system that is mounted on the ground instead of on a roof.

HELOC – Home equity line of credit. In certain states, a HELOC can be used to pay for a solar installation.

HOA – Homeowner’s Association. Can sometimes be a barrier to putting solar on your roof.

Interconnection – The physical and bureaucratic process of getting your system connected to the energy grid. Governed by sometimes nonsensical rules imposed by state governments and utility companies.

Inverter – A piece of equipment that converts DC electricity generated by solar panels to AC electricity used by your home.

IRR – Internal Rate of Return. Used to show the relative performance of an investment. Allows you to compare the potential return on solar to other investments.

Kilowatt (kW) – A unit of measurement equal to one thousand watts. Solar panels are rated according to how many kW they produce at any given moment.

Kilowatt-hour (kWh) – A unit of measurement of electricity generation equal to one kilowatt of generation (or consumption) operating for one hour.

Megawatt (MW) – A unit of measurement equal to one million watts.

Microinverter – A type of inverter that changes DC electricity to AC electricity on a per-panel basis. The output from several microinverters is combined and often fed to the electrical grid.

Module – a solar panel, or a group of solar cells.

Nameplate Rating – Also known as STC, or Standard Test Conditions. Nameplate rating refers to the performance of a piece of electricity-generating equipment under ideal laboratory conditions.

Natural Gas – It is a naturally occurring hydrocarbon gas mixture consisting primarily of methane, but commonly including varying amounts of other higher alkanes, and sometimes a small percentage of carbon dioxide, nitrogen, hydrogen sulfide, or helium. It is formed when layers of decomposing plant and animal matter are exposed to intense heat and pressure supplied by existing under the surface of the Earth over millions of years. The energy that the plants originally obtained from the sun is stored in the form of chemical bonds in the gas.

Net Metering – The practice of calculating the difference between energy produced by solar panels and energy consumed by a home. Net metering acts like cell phone rollover minutes, in that any power solar panels produce greater than consumption in one month is carried over to the next month. Net metering sometimes leads to a credit at the end of the year.

PACE Loan – Property-Assessed Clean Energy financing. A PACE loan is for homeowners who don’t have the capital to finance solar on their own. The loans are repaid over the selected term (over the course of somewhere between 5 and 25 years) via an annual assessment on their property tax bill.

Performance Payment – A bonus paid to the owner of a renewable energy producing system for the energy they sell to the grid. Performance payments can be direct payments above market prices for all the power a system produces or Renewable Energy Certificates, which can be sold to traditional utility companies to offset their usage of fossil fuels.

Photon – a “packet” of light energy.

Photovoltaic – The generation of electric energy from light.

Power purchase agreement (PPA) – a contract between a power producer and a power consumer, which states that the consumer will purchase a certain amount of power from the producer. In this type of solar agreement, a company installs a system on a homeowner’s property and then sells the energy to the homeowner at sub-market prices for a defined period of time.

PTC – Performance Test Conditions. This type of measurement of electrical output from a solar panel accounts for real-world conditions, including energy losses from wiring, and more.

Rebate – Usually a direct, lump sum payment given to a homeowner or installation company when they install solar panels on a home. Rebates are most often paid by utility companies to homeowners because the utilities can count the homeowners’ generation as clean energy toward their goals under an RPS law.

RPS Law – Renewable Portfolio Standard. An RPS law (often simply called an “RPS”) sets goal for renewable energy generation as a percentage of total output in a state. Most states have enacted RPS laws to spur development of renewable energy, and an RPS is the primary tool used to mandate rebates, tax exemptions, and tax credits for solar and other renewables.

Semiconductor – a material that has a limited ability to conduct electric current. Semiconductors used in different types of solar panels include copper indium diselenide, cadmium telluride gallium arsenide, and silicon.

Solar constant – the average amount of solar radiation that reaches the earth’s upper atmosphere, equal to 1353 watts per square meter. Solar Lease – A financial agreement in which a company installs a solar generation system on a homeowner’s property, then leases the panels to the homeowner over a given period. At the end of the lease’s term, the homeowner is often given the option to renew the lease or purchase the panels for the remainder of the cost, minus interest.

Solar Lease – A financial agreement in which a company installs a solar generation system on a homeowner’s property, then leases the panels to the homeowner over a given period. At the end of the lease’s term, the homeowner is often given the option to renew the lease or purchase the panels for the remainder of the cost, minus interest.

Solar noon – the time of day when the sun reaches its highest point in the sky. This time divides the daylight hours for that day exactly in half. Solar noon may be quite a bit different from ‘clock’ noon.

Solar Panels – The part of a solar power generation system that takes in photons from the sun and turns it into electrical energy, to be sent to the inverter and used in the home or transmitted to the utility company.

SREC – Solar Renewable Energy Credit. In states that have enacted laws mandating the creation of SREC markets, a solar power system earns the owner one SREC for each MW it generates. The SRECs are then sold to energy companies to offset their pollution and meet the goals of the RPS law in the state. SRECs are typically not sold directly by homeowner, but are bundled by intermediary companies for sale in large quantity.

Stand alone/off grid – a solar electric system that is not connected to a power grid and which may or may not have a battery.

Tax Credit – A direct reduction of taxes for the owner of a solar power system based on the system’s cost. The most notable tax credit in the US is the federal ITC. Tax credits are offered under some state RPS laws. Tax credits are often applicable over a number of tax years.

Tax Deduction – A reduction of income eligible for taxation for the owner of a solar power system based on the system’s cost. This type of tax incentive is rare in state RPS laws.

Tax Exemption – A direct reduction in property and/or sales taxes based on the value of a solar installation based on an increase in home value following installation of a solar power system or the cost of the installation itself, respectively.

Thin Film – A type of solar cell that uses a chemical layer instead of a silicon crystal as the method of converting solar energy to electrical energy. Thin-film is, as the name implies, thinner and less bulky than traditional solar cells, but not necessarily cheaper on a per-watt-generated basis.

Tilt – The degree of elevation of a solar panel relative to the ground. Tilt can either be fixed or adjustable by manual or automatic means. Tilt is one of two necessary orientation variables used to get maximum possible production from solar panels.

Tracking – A system that adjust the azimuth and tilt of solar panels to maximize the production of energy from solar panels.

Watt – A unit of energy equal to one joule per second.

Please let us know if we’re missing the term you’re looking for.