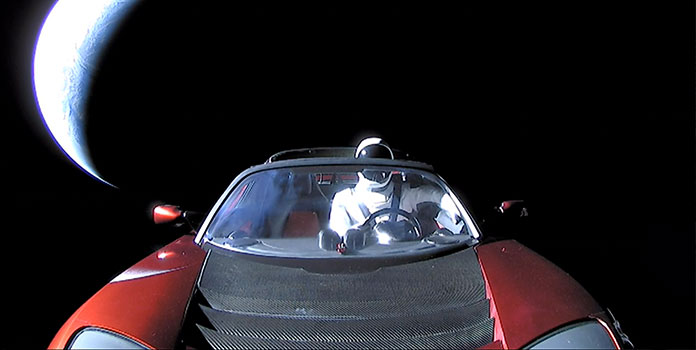 Why would SpaceX launch a Tesla Roadster into space, and where is it now?

SpaceX successfully launched Elon Musk’s own red Tesla Roadster into space, ‘driven’ by a spacesuit-wearing mannequin nicknamed Starman. And after the successful launch, we seemed to all collectively wonder, “What now? Where the heck is this Tesla car in space? Where is it going?” We were also curious if Starman is a good enough driver not to crash into us or anything else in space.

Thankfully, an engineer named Ben Pearson and a team from the University of Toronto decided to answer those questions – and the results are quite surprising.

Why did Musk send a Tesla car into space?

You probably already know that Elon Musk has his fingers in quite a few endeavors: Tesla, SolarCity, Stripe, Paypal (formerly), the Hyperloop… you get the idea. The guy’s pretty busy.

SpaceX is one such venture Musk founded in 2002. The company’s aim is to push space technology rapidly forward, eventually enabling colonization of other planets. (Yes, that’s right. Musk wants to colonize Mars.)

That’s obviously a lofty goal and the company currently has 3 ships and over 5,000 employees to make it happen. Of course, you can’t just go from nothing to Mars colonization, so for the last 15 years, they’ve been researching and testing rockets, developing new technology, and devising strategies to make space travel cheaper and easier.

One of their biggest successes, demonstrated at the February launch, is their ability to guide rockets safely back to earth to be used later, as a cost-saving measure – the first of its kind.

The February 2018 launch in Cape Canaveral, FL was a test of their Falcon rocket. Actually, it was 3 Falcon rockets strapped together – the most powerful rocket in use today.

So why the dummy? When it came time to drum up some publicity for the launch, Musk – ever the showman – knew exactly what to do. Instead of strapping on the typical dummy weights most rocket tests use, Musk fitted his very own Tesla Roadster complete with a spacesuit-wearing driver. Lovingly referred to as Starman, he will be listening to David Bowie’s Space Oddity in one ear and Is There Life on Mars? in the other for the rest of time (or until the battery dies).

Musk isn’t afraid of adding a bit of fun flair here and there to his otherwise sophisticated tech. From turning your Model S into a James Bond submarine to moving at lightspeed when engaging Ludicrous Mode, Musk knows how to grab our imaginations and, by extension, attention.

The Falcon Heavy launch went almost without a hitch. The rocket blasted off, with thousands of spectators cheering in person and a million+ viewers watching the live coverage. At just the right time, the rocket boosters separated and fell back towards earth, with two of the 3 rockets slowly falling back to their designated landing spots to be used later.

The third was supposed to land on a drone ship, but missed by about 300 feet, destroying both the rocket and ship. The video at the top of this section shows the 2 successful rockets landing back on earth.

In another fun twist, Musk equipped the Tesla with 4 video cameras – including one looking over Starman’s shoulder – that transmitted live video of absolutely stunning views of earth from a car windshield, a view we’ll probably never see again.

After ditching the boosters, the 2nd stage rockets maneuvered the Tesla out the earth’s orbit and into the sun’s orbit, hurtling through space at dizzying speeds of thousands of miles per hour.

How long will it hurtle through space? Researchers from the University of Toronto estimate it’ll be circling for millions of years, or until it smacks into something. How likely is that? Let’s find out!

Where is the Roadster now? 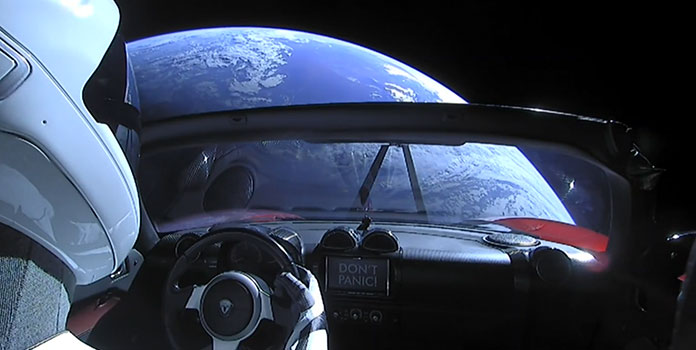 Now that the launch is over and we’ve all calmed down, we’re simply left wondering, “Where is that Tesla car in space?” Maybe you’re curious what Starman is looking at at this exact moment.

Thankfully, engineer Ben Pearson comes to our collective aid, estimating on his website WhereIsRoadster the whereabouts of Spaceman at any given point in time.

And how long will it be traveling? In March 2018, the university researchers published a report mapping out the trajectory of the Roadster through space. They estimated that it will likely last around 30 million years (yes, you read that right: 30 million years). Over the next millennium, they say the vehicle has a 6% chance of colliding with the earth at some point and a 2.5% chance of colliding with Venus.

So… not much need to worry about Spaceman’s driving skills.

Throughout the next few years, the Roadster will have a few near-misses, even coming as close as 4.5 million miles to Mars on October 6, 2020. (Again, we’re talking ‘space close’ here, not home-to-Starbucks close.)

Next steps for SpaceX: US Air Force, then Mars 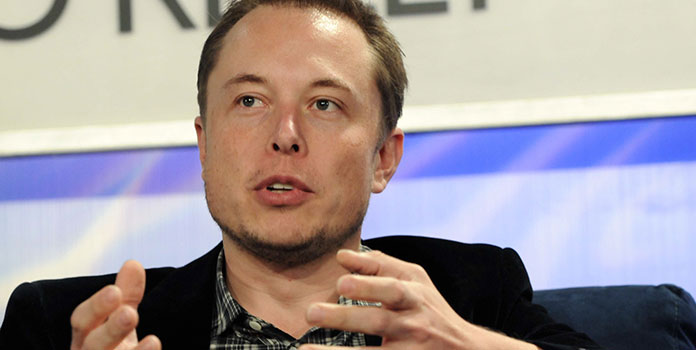 After the success of the Falcon Heavy test launch, Musk is eager to push forward. SpaceX launched the Falcon 9 – a 1.2 million pound, two-stage rocket (like the Falcon Heavy), 12 feet in diameter and 230 feet high, designed to transport satellites and the Dragon spaceship – two more times in early 2018.

These weren’t the Falcon 9’s first forays into space. The rocket made headlines back in 2012 when it successfully rendezvoused with the International Space Station, a first for any commercial space company.

In March 2018, the US Air Force announced that they’ve contracted SpaceX to launch their navigation and surveillance satellites – using the Falcon 9 – into orbit for 3 years starting in 2019.

Of course, with Elon Musk at the helm, SpaceX’s goals don’t just stop at launching satellites and supplying the International Space Station.

SpaceX plans to send their first cargo ship to Mars in 2022, with the goal of studying and identifying hazards to supporting life and infrastructure.

A 2nd mission is planned for 2024 which, get this, will include both cargo and crew. Yes, and crew – with the objective to further build infrastructure and prepare for future crews. The ships will serve double-duty as the first base on Mars, “from which we can build a thriving city and eventually a self-sustaining civilization on Mars,” according to SpaceX.

In the end, maybe Musk didn’t send up the mannequin as a publicity stunt, but to simply get us used to the idea of this private company sending out real human beings into deep space. (Though they probably won’t be strapped into a red Roadster!)