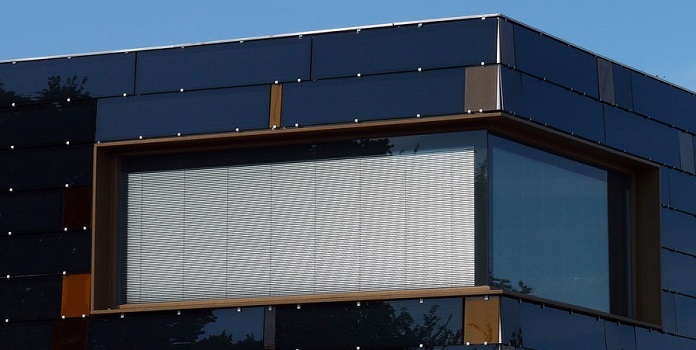 When all factors are considered, going vertical with your solar panels (probably) won’t pay off.

Installing solar panels vertically, typically on the outside wall of a building, can be an option when roof-top space isn’t available. However, higher installation costs coupled with lower production likely means vertical solar panels will remain a niche market in the solar industry. We’ll explain all that below, and let you know when going vertical might be a viable option. 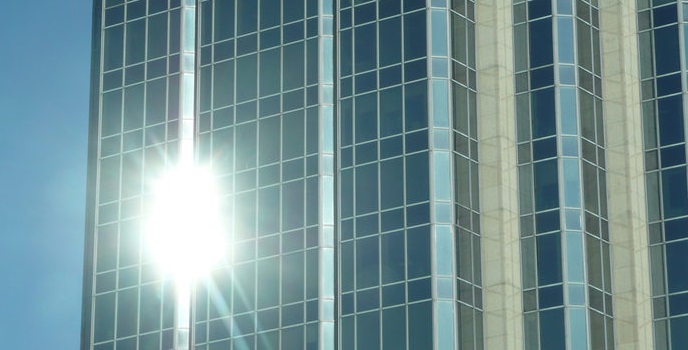 Most solar panels are installed almost horizontally, either on ground mounts or on roofs, to maximize benefits. First, it’s easier to install when you can stand without the need for scaffolding, leading to a cheaper installation. Secondly, our solar mounting hardware is extensively tested and streamlined for both roof- and ground-mounted systems, so the industry is already set up for this type of installation.

Lastly, roofs typically have ample unused space to install a bunch of solar panels. It’s out of the way, and most of us either don’t notice or quickly forget that solar panels are even up there, pumping out electricity day after day.

But what if you don’t have the space on your roof or on the ground nearby to install solar panels? What can you do?

If your utility offers virtual net metering or a community solar program, you could certainly enroll in those. Maybe they even offer a green energy program where a percentage of your electricity is renewably sourced. But what if you just really, really want panels on your building?

That’s where installing solar panels vertically would be an option. Commercial buildings might have limited roof space, but nearly always have an ample, unused south-facing façade (expect maybe for windows, but that’s a different story). Why not just smack some solar panels on the side of the building?

You absolutely can. In fact, there are a few serious benefit to installing solar panels vertically, as opposed to horizontally as usual:

First, if you live in a snow-heavy area, installing your panels vertically can help with production. In some areas, snow can completely cover the panels for weeks (or even months) at a time during winter. Since the snow won’t be able to settle on your panels, you won’t waste any sunny days during those cold months.

Secondly, as we already mentioned, the sides of buildings are typically large. They are perfect for nice, straight rows of solar panels all along the face. The taller the building, the more room you have to put your vertical panels!

However, installing solar panels vertically is not ideal – you want panels perpendicular to the sun for max production. So is installing vertical solar panels worth it? Let’s run through some numbers to find out!

How does it affect production?

Optimal solar production is all about panel placement. In the US, that typically means solar panels facing directly south (towards the equator), at a right angle to the sun.

Of course, it’s not that simple. The sun’s height in the sky changes from season to season, staying low on the horizon in winter and higher in the sky in the summer.

With this in mind, vertically-installed panels will produce better in the winter, as the sun is lower in the sky. However, in the summertime, when the sun is high in the sky, vertical placement really starts to affect production.

Exactly how much it affects production depends on the location. As you get closer to the equator, the production from vertical solar panels will decrease as the angle of the solar panel in relation to the sun becomes less and less ideal. Here’s a cool calculator to help you quickly find the optimal angle for your solar panels (we used it for our examples below).

Speaking of which, let’s look at a couple different areas to give you a better idea of what we mean.

The optimum tilt angle for solar panels in Arizona is 57 degrees, averaged out from 34 degrees in winter and 80 degrees in summer.

If we install a 5kW system in Arizona that faces south with panels at a 57 degree tilt, it’ll produce about 8,786 kWh in a single year. How about the same 5kW installation with vertically-installed panels? Total production drops to just 5,338 kWh – a fall of 40%!

Take a look at this chart comparing production, as calculated in NREL’s PVWatts solar calculator. Note how, during the summer months, energy production from the optimally-angled panels are almost 4x as much as the vertically-installed panels! During the winter months, though, when the sun angle is much more suited for vertical panels, energy production is very similar.

As you go further north and the sun’s angle decreases accordingly, the difference in energy production between the optimally-placed panels and vertical panels will decrease. Let’s look at another example to compare the numbers. 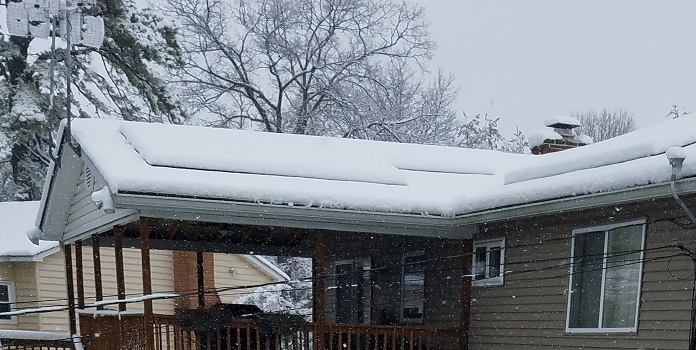 Cold, snowy Minnesota is about 1600 miles to the northeast of Arizona and their optimum solar panel angle is an even 45 degrees (22 in winter, 68 in summer). Note that, when comparing their sun angle with Arizona, we can already see that vertical solar panels here would be more effective than in Arizona.

While these vertical solar panels certainly don’t produce as much as optimally-placed panels, the gap between the two is less noticeable than Arizona’s. Minnesota’s higher latitude means the sun is lower in the sky year-round, making vertical panels more effective. 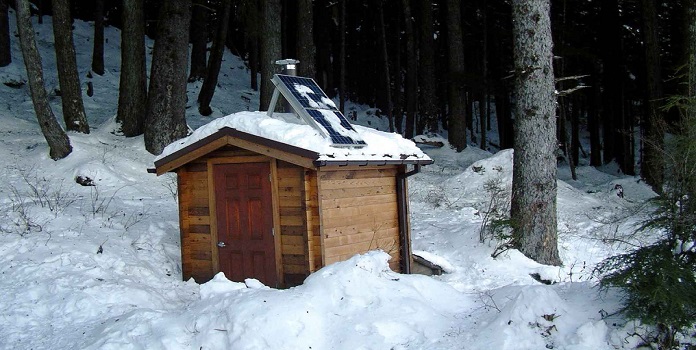 In far-north Alaska, the production loss from vertical panels is even less, even with their cold, snowy winters. Optimal solar angle in Anchorage is just 29 degrees, much lower than Minnesota and Arizona, so the production gap between vertical and optimally-angled panels will be much smaller than our other two examples. 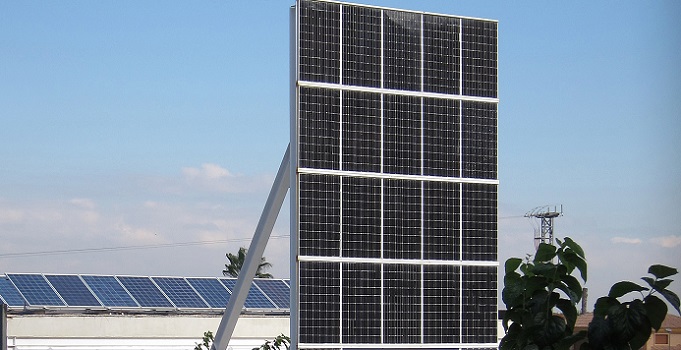 As we’ve seen, a few challenges spring up when installing solar panels vertically.

Vertical solar panels are sub-optimal for solar production, and that is the biggest issue facing vertical installation. Installing solar panels is a money saving investment. Lower energy production means your installation will take longer to pay itself off, lowering your ROI and increasing the amount of time it takes to make your money back.

Installing solar panels on the side of a building necessitates scaffolding, unique mounting hardware, and greater safety considerations than simply installing on the ground or roof. With all these additional challenges undoubtedly comes higher installation costs, increasing your total out of pocket expenses.

If a solar panel stops working or malfunctions after the installation is complete, hands-on troubleshooting suddenly becomes a bigger deal with vertical solar panels. To access the problem panel, technicians will need to either build scaffolding or drop down from the top like a high-rise window washer. Either way, it’s not as easy as walking onto the roof and simply looking underneath the panel.

Why take the risk?

Even still, it’s a hard sell no matter what.

If you’ve looked into vertical solar panels before, tell us what you think in the comments below!