Where Does Wind Energy Come From? 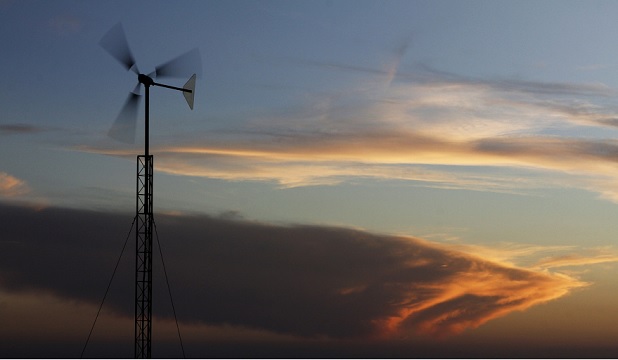 We’ve been harnessing energy from the wind for a long time, but where’s it come from?

If you live in the northeast or the west, you’ve probably seen lots of homes generating their own electricity with solar panels. If you live on the plains of the Midwest though, you’ve probably seen an equally green electricity generator with a much less visible energy source: wind turbines. Solar panels get their energy from the sun, but where does wind energy come from?

On a beautiful summer day, when there’s not a cloud in the sky and the sun is beating down on your head, it’s pretty easy to figure out where solar panels are drawing their energy. Just look up! It’s that big orange orb in the sky. It’s not quite so obvious with wind energy.

When driving through Nebraska or Wyoming (as I did just a couple weeks ago), you’ll see wind farms with massive turbines peaking up above the oncoming horizon. As you drive by, neck craning up, you can barely see the tops because they’re so tall. Until you’re directly underneath, their sheer size isn’t really understandable. I was left wondering, where does all this energy really come form?

How does the earth create wind? 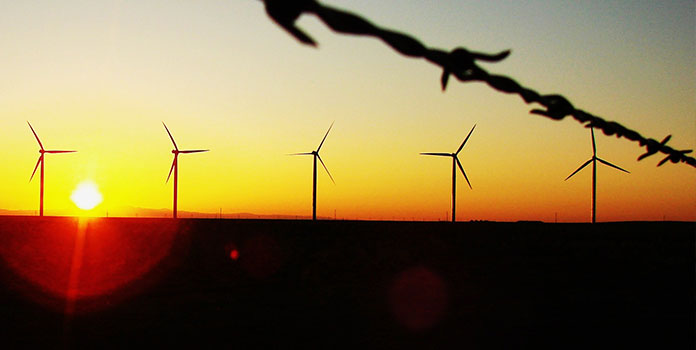 The question above is actually misleading, as the earth doesn’t really create wind. We can actually thank the sun for that.

The earth is encompassed in a layer of air, made up of nitrogen (78%), oxygen (21%), water vapor (1-4%), and a few other elements. This air, just like everything else on the planet, has weight and pushes down on the earth, typically around 1013.25 millibars (14.7 pounds per square inch) at sea level. As you increase in altitude, that pressure lessens as the air becomes less dense.

So, where does the sun come in? Thanks to the round shape of the earth and the very different substances covering it (plains, mountains, trees, deserts, beaches, shallow water, deep water, etc), the earth is heated unevenly by the sun. Some areas get hotter than others. And just like we all learned in school, when air gets hot, it expands and decreases in pressure.

What happens to this hot air? It rises, creating a vacuum that is filled by – can you guess? – colder, more dense air. And that, right there, is wind. It’s simply colder (i.e. more dense) air filling a void that rising hot air left, what is known as pressure gradient force.

So in a very real sense, wind is actually a form of solar energy!

Where does wind energy come from?

So, wind is caused by differences in air pressure, but why are some areas – like Wyoming or the beach – more consistently windy than others?

When you’re sitting on the beach enjoying the sun and slight breeze, you’re actually seeing pressure gradient force in action. Sand and earth heat up more quickly than water, so the air above the earth decreases in pressure.  Air above the cool water rushes in to fill that space, creating the pleasant sea breeze we all love.

Wyoming residents, who suffer through some of, if not the harshest wind in the country, can thank their unique geography for their strong winds. High air pressure (i.e. colder air) in the Great Basin on the western side of the state is pulled down by the warmer air rising over the flat plains, where there’s simply nothing to block or slow it down. Check out the video above of Wyoming winds blowing an 18 wheeler onto a cop car while on the interstate. That’s some serious wind!

Now take a look at the map below. You’ll see that the strongest winds are right through the Midwest plains – open grassland with little to hinder or slow down those winds, just like Wyoming. 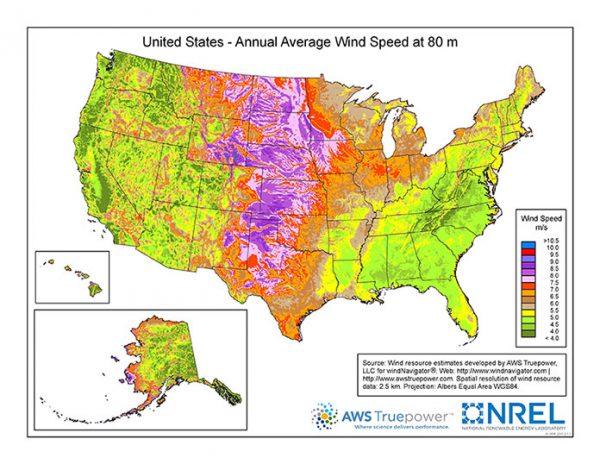 Want to see something really fascinating? Take a look at the map below of wind turbines in the US. You can probably guess where they’re situated.

Compare the two maps and you’ll see that most wind turbines follow almost exactly the Midwest belt of high wind – even down to the west side of Oklahoma and northwest section of Texas. There are obviously outliers on the east and west coast, but the majority of wind farms are located right down America’s heartland. 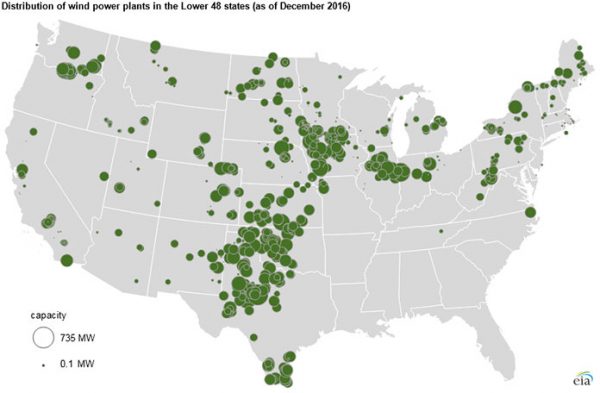 So, to answer the question where does wind energy come from? The answer is Texas, Oklahoma, Iowa, Nebraska, and other states along the flat Midwest plains and east towards Illinois.

Wind power is a huge source of electricity 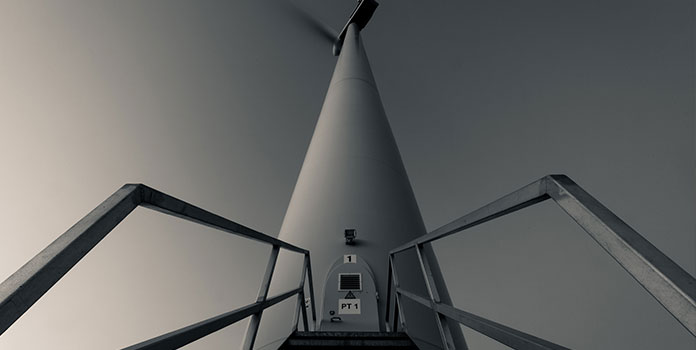 Now that we know where all this wind power is located, how do we harvest it?

A typical utility-sized wind turbine can produce around 2 megawatts of electricity under good conditions, producing around 6 million kilowatt-hours of power each year. That’s enough electricity to power over 6,500 average homes each year!

Wind power is the 2nd most common renewable energy in the US (just behind hydropower) and has enjoyed a huge splurge of growth over the last 20 years. It’s cheap, creates huge amounts of electricity (as we saw above), and can even work during spouts of bad weather (unlike solar panels).

So next time you’re driving through Iowa and see rows of giant-like wind turbines out the window, you can think about all the electricity they’re generating – and all the homes that are enjoying that clean, renewable power. Want to create some clean electricity of your own? Reach out to a few solar installers and see what you can do on your own roof or consider getting a home wind turbine!

Have any thoughts on wind power in the US? Let us know in the comments below!