How Decoupled Utilities Could End the Solar-Utility War 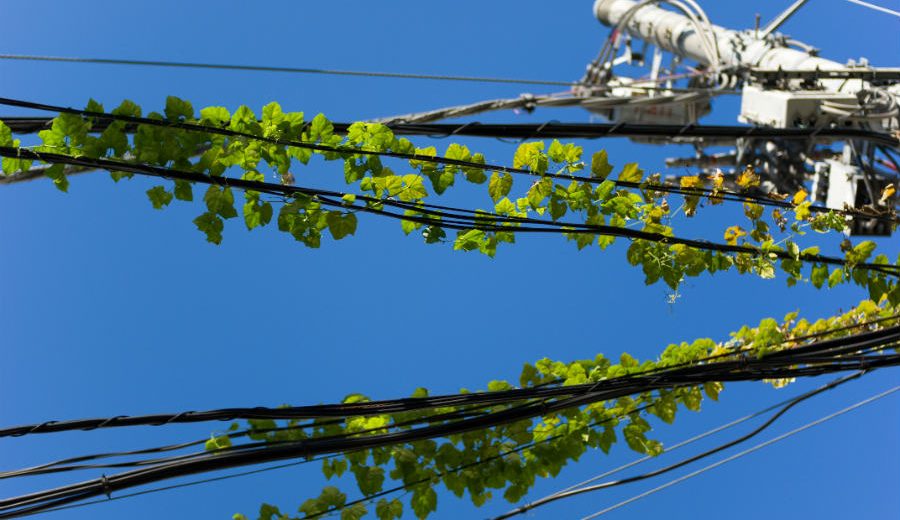 When the Obama administration began in 2009, there were only five states with decoupled utilities. Now there’s sixteen.

Decoupling a utility’s revenue from its total sales is intended to solve a “perverse incentive” that reduces utility motivation to increase energy efficiency.

As part of the American Recovery and Investment Act in 2009, states were invited to compete for $3 billion in Energy Efficiency Program funds to encourage utilities to incentivize reduction in electricity demand. Governors had to verify to the DOE that the state’s Public Utility Commission (PUC) would decouple the utilities’ revenue from profits.

Normally, a utility earns more when it sells more energy. By “decoupling” utility revenues from profits, the state utility regulator can reverse that perverse incentive to generate more electricity.

Decoupling prevents a utility’s income from going down when it gets its customers to buy less energy.

California was the first state to decouple electricity in 1982, prompted by John Bryson, a founder of the National Resources Defense Council (NRDC) who was then chairman of the California Public Utilities Commission (CPUC). Even though California’s energy rates on a per kWh basis are typically higher than those in other states, average utility bills are lower because of the high energy efficiency measures.

Decoupling is a major part of what helped the state flatline its electricity use – by contrast with other states, that saw electricity use rising. By 2006, California was emitting only about half as much carbon per dollar of economic activity as the rest of America. Its utilities, PG&E, SCE and SDG&E are now very used to operating within this regulatory regime. 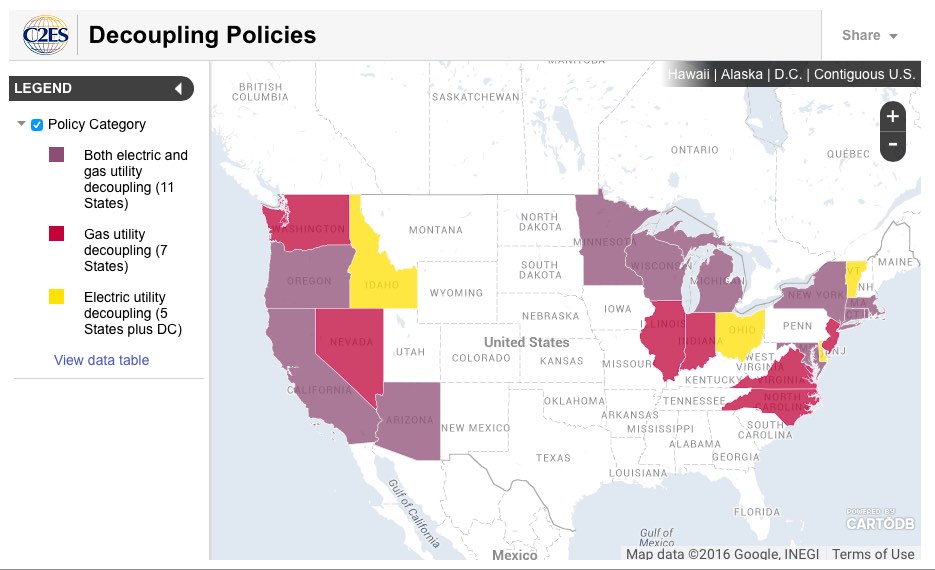 Before the Recovery Act, federal funding for states for energy efficiency measures was almost non-existent. The Recovery Act provided a one-time jolt, making $3 billion potentially available, between all the states

California has been joined by Massachusetts and Connecticut, where all-electric utilities must have some form of decoupling program in place. Now eleven states including Hawaii, Wisconsin, Vermont, Oregon, New York, Maryland, and Idaho have approved decoupling programs and begun implementing them.

Over the last seven years, utility efficiency spending is up four-fold. The result is that “since 2007, incremental efficiency achievements have risen 17% on average annually.”

This year, Pennsylvania is about to join 15 other states with decoupling rate structures in place for electric utilities.

According to ThinkProgress, a 2015 study of states as diverse as California, Vermont, Idaho, and Oregon clearly shows that efficiency investment and electricity savings soar after utility decoupling

For a century, energy use and carbon emissions have risen at a faster pace than economic growth. That relationship first showed signs of ending as early as 2000, before the recession, before the switch from coal to natural gas, and before this tripling in the number of states to decouple utilities. The U.S. has already reversed the relationship between growth and carbon emissions.

But the additional savings in greenhouse gases due to revenue decoupling could be significant according to MacArthur Fellow David B. Goldstein, the author of “Invisible Energy: Strategies to Rescue the Economy.”

Goldstein predicted in 2012 that the carbon results of this increase in decoupled utilities would start to show up over the next few years. He estimated that the long term potential carbon savings due to utility decoupling is 80% of emissions from electricity generation. With utilities responsible for more than half of U.S. carbon emissions, this could result in something on the order of a 40% reduction in all U.S. carbon emissions over the next 50 years.

So what were the conditions for accepting the $3 billion?

“This $3bn in funding came with conditions attached to it,” explained Cavanagh. “State regulators had to consider the option of revenue decoupling.

While they didn’t have to do it, it put the issue on their agenda. Governors basically had to say they’d ensure the issue got the full attention of state regulators.

This “request” is actually the most that Washington can do, according to Cavanagh. State regulators resist federal coercion. If the federal government had tried to do any more, given the way that state regulation of utilities works in the United States, he believes that it almost certainly would have been counterproductive.

Surprisingly, every state made a written commitment to actually give the novel idea a try. Even though it seems counterproductive to pay a utility to not sell power, the idea worked. “Revenue Decoupling is now on the agenda in virtually every state,” he says.

Energy efficiency measures such as switching lighting to LEDs are one way to reduce emissions.

There is another way to reduce demand on the grid, and that is for regulators to allow its utilities to decouple revenues from profits when more households go solar.

Rather than seeing revenues decline as more electricity sales are displaced, utilities would then be just as empowered to encourage more demand reduction through local behind-the-meter solar as they are to encourage other efficiency measures.

State-level PUCs could adjust rates in a formulaic way to compensate for the losses, and ensure that the fixed costs of the grid continue to be paid for (along with their profits). In theory, this ought to remove or at least reduce their opposition to net metering.

With revenue decoupling in place, utilities theoretically could have more room to allow net metering and other policies that encourage distributed generation, without seeing them as an automatic threat to their income stream.

There is no reason why revenue decoupling couldn’t also be extended to insulate utilities against the sales they lose to rooftop solar.

The value of distributed solar to the grid, especially in terms of generation close to load is increasingly well understood.

According to the SEIA, decoupling is one of the big reasons behind the support by California utilities that has led to the most solar of all the states.

In 2011, Arizona Public Service (APS) pointed out that reducing electricity demand is much cheaper than building new power plants. The utility spends about 1.9 cents per kilowatt-hour to save electricity by actually paying its customers to install more-efficient pool pumps and air-conditioners and to fix leaky ducts. If instead, the utility were to build more power plants to meet that demand – and sell that extra electricity – it would cost them an average of 10 cents per kWh.

By merely allowing more behind-the-meter solar, APS would be saving 10 cents by not having to build that new power plant NOR would it need to spend 1.9 cents per kWh encouraging customers to go solar

And since the whole point of decoupling utilities is to cut carbon emissions, solar really should be at least as much a part of a decoupled utility model as energy efficiency is.

It really makes no difference how demand is reduced, whether that is by a customer making more electricity behind the meter, or by installing efficient appliances and lighting. Both reduce carbon emissions as both reduce the need for dirty power plants.

Tellingly, it is the states that have not decoupled electricity that are fighting net metering the hardest. For example, Nevada recently retroactively rolled back net metering policy. In a stroke of the pen, solar customers in the state lost their financial hedge against ever-rising utility electricity prices and solar workers lost their jobs selling and installing solar roofs in the state.