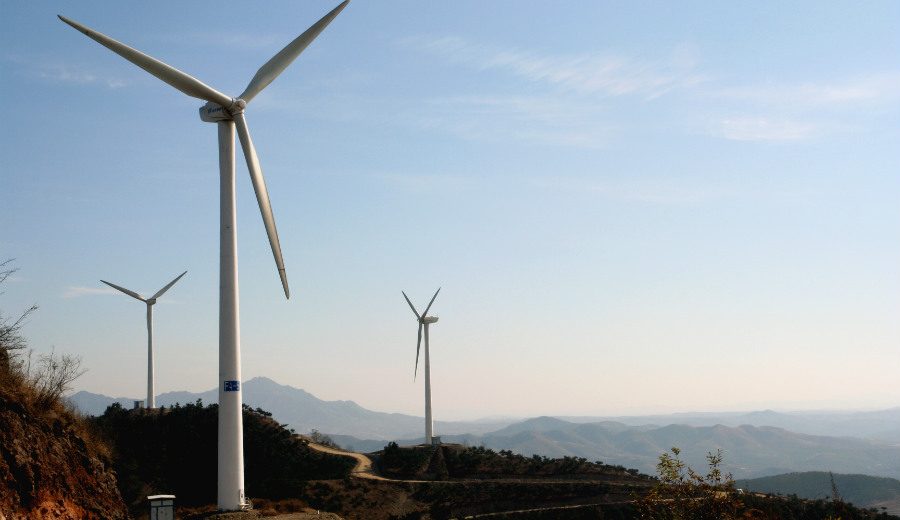 What China is doing about energy is already having a measurable effect on global greenhouse gas emissions.

In 2015, the first evidence of the Beijing government’s determination to reduce carbon emissions  may have been seen globally, as it continued an unprecedented increase in carbon-free energy substitutions and cut coal use by a full third in just a year.

Is China’s switch from coal to carbon-free electricity responsible for the world’s first-ever global levelling-off of greenhouse gas emissions?

China now accounts for an astonishing 40% of all renewable energy growth globally, according to the Center for American Progress (CAP).

The speed at which China is now adding carbon-free capacity is pretty incredible. In 2013, it built 16 GW of wind power. In  2014 China added 51 GW. In 2015, China built, and connected 63 GW of wind to the grid, so that the current cumulative total of 129 GW is now all connected to the grid and delivering power. (In earlier year counts, wind farm total capacity was counted before connections to the grid.)

By the end of 2015, total installed – and this time, also grid-connected – wind power generation capacity amounts to 129 GW.

Total installed – and grid-connected – solar capacity saw an even more amazing increase in one year than did wind (at a 33% increase), with solar going up by an astonishing 74%, to 43 GW.

China has begun to implement its plan to get to 143 GW of solar by 2020, Nur Bekri, head of the National Energy Administration, told Bloomberg during a conference in Beijing. Over the next five years that means an addition of up to 20 GW of solar annually.

At 43 GW of solar, China now surpasses Germany as the nation with the most installed solar capacity in the world, and it accounted for over a quarter of total solar additions globally.

With 3,306 km of track laid in 2015, its high-speed rail laid in 2015 is ten times the distance of the high speed rail planned (and not fully implemented) for San Francisco to Los Angeles. It laid another 8,964 km of electrified train transport, the kind that is used by BART or the New York Subway and is a model of efficiency in use of electricity.

Nuclear power has also begun to make a massive dent in China’s emissions, with installed nuclear power generation capacity increased 30% to 27 GW in 2015. This pace is set to continue as well until China has 100 GW of nuclear power by 2020, more than any nation in the world.

Under the latest Five-Year Plan, according to World Nuclear News, China’s operating nuclear generating capacity will double over the next five years under the country’s latest Five-Year Plan. China’s current nuclear capacity as of the end of 2015 is 27 GW. Based on how many plants are now in construction, China will have a new total of 58 GW of nuclear power operating by 2020.

And on top of that first capacity doubling, a second round of construction is then set to begin in 2020, to bring an additional 30 GW online by 2025, more than the current total in operation.

The very slow and laborious development of nuclear power in the US for several decades from the 1950s never got to the speed of development now being seen in China.

This is the kind of pace that brings prices down. Currently nuclear is in decline as the most expensive power to build. China could overcome this with its alacrity in mass production and even start exporting plants to other developing nations with the kind of rising energy demand that threatens global climate stability.

China has long been the world leader in hydropower, and in 2015, China accounted for two-thirds of new hydropower added, with 19 GW of new capacity in 2015. According to Chinese official data, that increased total installed hydropower generation capacity  to 319 GW in China, about a quarter of the global total of 1,211 GW. 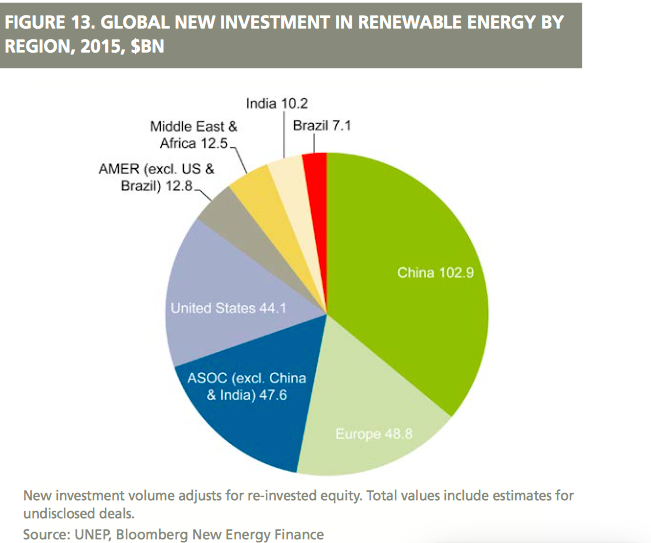 China’s coal generation was down 3%, according to China’s 2015 energy summary. And the coal on hand to burn in coal plants also dropped precipitously.

But then in 2015, with more carbon-free generation, Chinese coal imports dropped a simply astounding 30% from 2014 levels.

In 2014, the Beijing government began deliberately shutting down the use of coal for energy generation. It closed more than 1,000 coal mines, 5 GW of coal power plants, as well as 55,000 industrial boilers, to reduce coal pollution.

The consumption of coal still accounted for 64% of total Chinese energy consumption in 2015, but that is continuing a downward trend that is now clearly set to continue to decline over the next years. And this could be part of what has impacted CO2 levels globally:

As the biggest coal burner on the planet, China’s reduction in coal burning since 2014 actually can be seen in a flattening of global CO2 levels

(China uses almost no natural gas for electricity.) It did complete new coal power plants in 2015, but coal plants take about four years to build, so they would have started prior to the big switch begun in 2014. and these represent a relatively modest 8% increase, bringing the total to 990 GW of potential capacity.

What is important to note about China’s new coal plants is that to some extent these are “ghost plants”, a bit like the $11 trillion dollars China spent building “ghost cities”, publicized in a 60 Minutes expose a few years back, born  of China’s tremendous, almost uncontrollable industrial momentum (“a moving object, once in motion, stays in motion”).

China simply is a powerhouse that cannot turn on a dime

It may even keep building coal plants for a bit even as it pivots to renewables (coal plants take about four years to build in many countries, although perhaps less time in China) but the fact is that it is simply not importing the coal to run in them.

What happens is that local officials are still building more plants than they actually need, partly because financing for these projects is not always market-based. So the excess number of new plants drives down the utilization of each one. By 2014, that already drove utilization down to just 54%, the lowest utilization rate since the earliest days of its reform and opening process in the 1970s. Greenpeace has laid out the evidence of the ghost coal plants creating a capacity bubble here.

But this same exuberant unstoppable momentum that resulted in “ghost construction” works in favor of its new carbon-free development too Once China decided to make climate the key, the direction changed

In late 2014 and early 2015, policies were introduced that imposed heavy taxes on coal production; banned the production, sale or import of high-emission coal; and gave regulators authority to fine violators under a new environmental law akin. According to the Center for American Progress (CAP), it is these policies that are what is behind the abrupt about-turn in China’s energy numbers.

These policies are designed to turn China towards carbon-free generation. They are what have driven down coal imports and exports, and made coal an uneconomic activity, steadily reducing coal use. The move has been bold. About half of China’s coal companies are reporting losses in 2015, with the largest one, China Shenhua Energy Company Limited reporting a 45% loss.

And with smart policy, that percentage is geared to continue to rise, gradually eclipsing dirty-fueled electricity with clean energy.

China’s coal use as recently as 2013 took it to the top emitter by far: 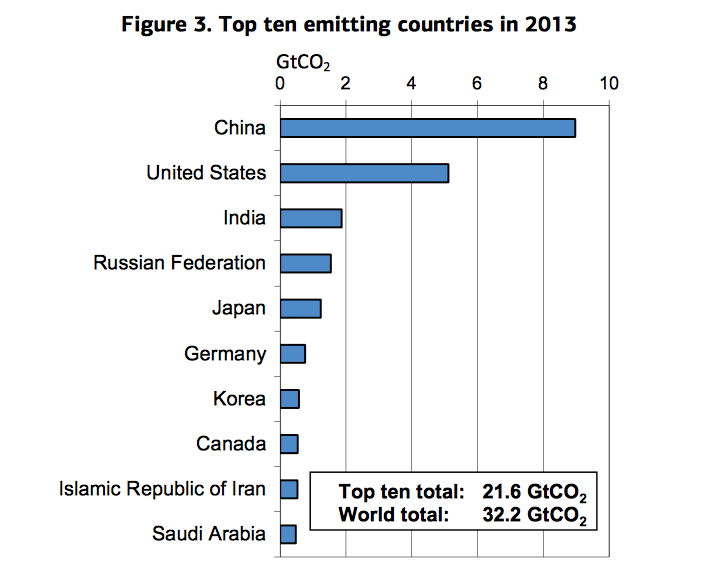 After meeting with President Obama at the end of 2015, Chinese President Xi Jinping announced many clean policies geared towards ending our civilization’s headlong rush into a dangerously destabilized climate that lasts for thousands of future generations.

One of the most effective of these policies is that China will now move the nation toward a merit-order of electricity production.

China’s “green dispatch” model follows merit-order dispatch rules in Germany and in some US states. These prioritize generation resources that produce energy at the least incremental cost.

Since carbon-combustion technologies like coal and gas-fired electricity require fuels in order to ship any new generation, a fossil powered electricity has a lower rating in the merit order.

Conversely, the incremental fuel cost to generate wind or solar is zero, because once the plant is built, there is no cost for the “green dispatch” of wind or solar, which generate as long as there is sunshine or wind.